In recent decades, the clustering of rich and poor neighborhoods in America has continued, expanding inequality.

In recent decades, the clustering of rich and poor neighborhoods in America has continued, expanding inequality.

The popular discourse on cities and neighborhoods in recent decades has placed great emphasis on how gentrification is reshaping them, but there has been comparatively little attention devoted to other ways these places are changing or are remaining the same. In my recent study, I took a detailed look at how neighborhoods in the 50 largest metropolitan statistical areas (MSAs) of the United States changed from 1980 until 2010. My research shows that a type of change most associated with gentrification, featuring an increase in college-educated, childless, young professionals coupled with multi-family housing construction in relatively racially diverse, economically disadvantaged neighborhoods is one means of change affecting neighborhoods. However, this trajectory is far less common than the durable and expanding concentrations of wealth and poverty that occurred at the same time.

According to my analysis, the highest poverty, majority black neighborhoods and the wealthiest and whitest neighborhoods proved to be the most stable over the 30-year period I studied, and the most spatially compact. Over time, these neighborhoods clustered together more closely, further exacerbating their polarization from one another.

The largest numbers of enduring high poverty black neighborhoods are located in Northern and Midwestern cities that served as destinations of the Great Migration in the early decades of the twentieth century. The patterns of racial segregation carved out during that time period have proved to be extremely persistent over time. The map in Figure 1 identifies these cities as ‘Group 5: Persistent Black Poverty’, based on their similarly high concentrations of this type of neighborhood.

Figure 1 – Cities Classified by the Similarity of their Neighborhood Trajectories 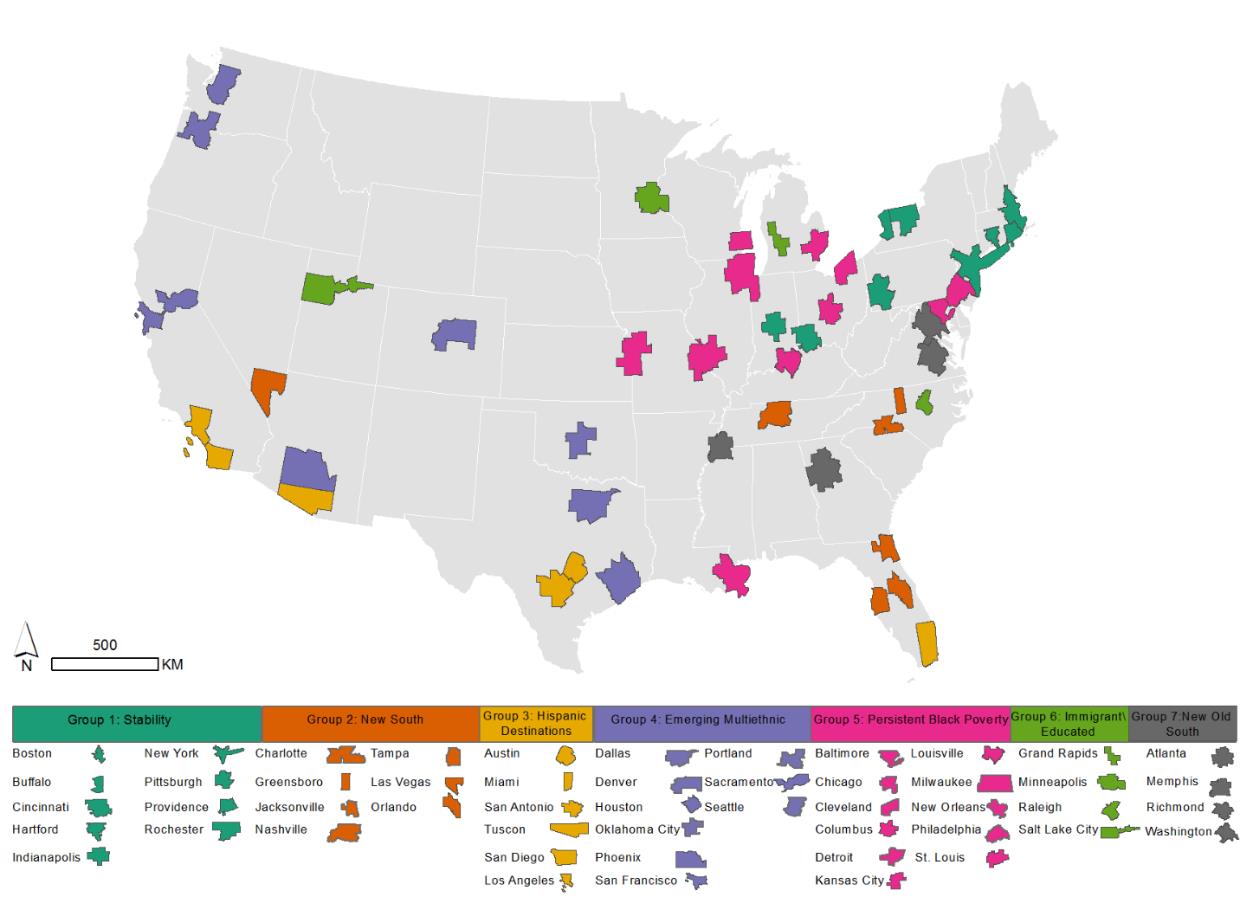 The group of cities in Figure 1 identified as ‘Group 7: New Old South’ also have high concentrations of persistent black poverty neighborhoods, but this static deprivation has occurred while new single-family, largely white and upper-middle class neighborhoods have expanded. These dynamics again highlight a trend toward increasing inequality and socioeconomic segregation – patterns that have been discussed by others, and deemed a crisis facing US cities in Richard Florida’s newest book.

While the identified high poverty black neighborhoods were largely formed in the earlier decades of the twentieth century, current pathways of neighborhood socioeconomic decline have resulted in the establishment of predominantly Hispanic, high-poverty neighborhoods. These growing Hispanic high poverty neighborhoods are chiefly located in southernmost US cities that are the largest recipients of Hispanic immigrants and migrants (Group 3 in the map in Figure 1). Like the high-poverty black neighborhoods, they are also clustered together and expanding next to one another. The southernmost cities that are home to the largest concentrations of these new and expanding pockets of poverty should be forewarned of the struggles faced by their northern and western counterparts associated with concentrated, racially segregated poverty and the difficulties in reversing these trends over time.

“Mini Daly City” by Daniel Hoherd is licensed under CC BY NC 2.0

A second trend that emerged from my analysis was a transition from neighborhoods characterized by stereotypical suburban traits featuring single-family homes, largely white, and upper-middle class populations towards multi-family structures and an increase in younger, college-educated, and a more diverse population. This type of transition was more common in rapidly growing Sunbelt cities including those identified as Group 2: New South and Group 6: Immigrant and Educated. The transformation of stereotypical suburban neighborhoods may be reflective of a diversification in the way in which newer neighborhoods are constructed away from the single-family mold that shaped the post-war landscape of older cities.

Finally, I identified one type of neighborhood characterized by racial diversity. This neighborhood type tended to have slightly below average socioeconomic characteristics, a higher share of renters, and more multifamily than single-family housing and were a minority compared to neighborhoods dominated by a single race. While few in number overall, they are more prevalent in faster growing western cities such as Seattle, Portland, and San Francisco (Group 4: Emerging multiethnic in the map above).

Overall, according to my analysis, more than half of all neighborhoods in the 50 largest metropolitan areas of the United States followed a trajectory of stability from 1980 until 2010. Despite all of the attention devoted to the subject of change, the majority of neighborhoods maintain the same set of housing, socioeconomic, and racial characteristics over the course of several decades. This finding is especially acute for the most racially similar neighborhoods at either end of the socioeconomic spectrum. More attention should therefore be geared toward addressing this less visible pattern of persistent inequality.

The Ballpark Podcast Extra Innings: New York City’s Planning Challenges for 2020 and Beyond with Marisa Lago