Why Trump’s pull-out of the Paris Agreement may open the door for state Governors to push their own climate action.

Why Trump’s pull-out of the Paris Agreement may open the door for state Governors to push their own climate action.

In June, President Trump announced that the US would be withdrawing from the Paris Agreement on climate change, prompting some US cities and states to reaffirm their own commitments to the agreement. In new research, Katja Biedenkopf looks at how federal inaction can spur state Governors to push for ambitious policies to mitigate climate change. She cautions that such actions are not always completely altruistic; some Governors can be motivated by a desire for career advancement or to promote their own state’s interests, which can lead to short-lived initiatives that are quickly abandoned.

President Trump’s announcement to withdraw the United States from the Paris Agreement on climate change in June 2017 triggered the promise by a multitude of US cities and states to pursue and strengthen their own climate action, thereby counterbalancing the impact of the federal government’s policy choice. Former President Obama and Secretary of State Kerry invested major diplomatic efforts and skills in the international process to make possible an ambitious international agreement that would set the world on a path to avoid damaging climatic change with serious implications for future generations. The radical policy change in the US and the subsequent reactions beg the question to what extent cities and states can contribute to the US keeping its promise made in Paris. Governors can be important players in this context. I analysed the entrepreneurship of US governors in the case of state-level greenhouse gas emissions trading policies in order to provide a better understanding of the drivers of ambitious gubernatorial entrepreneurship and state-level climate action in the United States.

The fact that states and cities are stepping in after the federal government gave up on the Paris Agreement suggests that their leaders are convinced that climate change policy needs to be adopted to avoid harm to people’s lives. This is not the only possible motivation; not all gubernatorial decisions are grounded in the desire to mitigate climate change. Governors can also be motivated by the potential for their career to be boosted: by pushing for innovative and ambitious climate policy, governors can increase their prominence, develop a national profile, construct a legacy and advance their career by claiming credit for the adoption of the policy. A third motivation can be the support and furthering of the interests of a Governor’s state. Governors can push for a policy innovation in an attempt to represent and advance their state’s preferences and interests in anticipation of federal policy changes. The first, more personal, motivation leads to a long-term commitment from a governor while the two latter are based on the seizing of an opportunity as it emerges, which can lead to fluctuations in a governor’s policy positions and short-lived initiatives.

To understand governors’ motivations, the federal-state context needs to be considered. When the federal government is inactive, it creates ample scope for gubernatorial entrepreneurship. Strong gubernatorial entrepreneurs can seize windows of opportunity for ambitious climate policy that are opened by federal inaction. Those governors take a risk because of the uncertainty whether the policy will be (politically) successful. This requires strong entrepreneurship of proactive governors that perceive the need to push for their ambitious policy ideas (personal ideational motivation) or conceive of it as an opportunity to attract national attention (career advancement motivation). When federal policy is anticipated but not yet developed, weaker gubernatorial entrepreneurs can react aiming to shape the to-be-designed federal rules according to their state-level preferences (jurisdictional interest motivation).

In the case of state-level greenhouse gas (GHG) emissions trading in the United States, the different motivations can be seen at play. GHG emissions trading is a climate policy in which an overall emissions limit is set for all entities that are included in the policy. Covered entities obtain emission allowances for free or purchase them in auctions. The number of allowances in the possession of an emitter must match its actual emissions during a defined period of time. Excess allowances can be sold or additional allowances need to be purchased, depending on an emitter’s emission reduction efforts. Adopting emissions trading policy plans has not been limited to those states with a track record of environmentally-progressive policy such as California and other Western and Northeastern states, some Midwestern states, which are less associated with ambitious climate policy innovations, have done so as well. Moreover, the development of GHG emissions schemes has fluctuated with a peak in 2007–2010 when as many as 23 US states were involved in developing or implementing a system. Later, 13 states withdrew or failed to implement their plans.

In a survey that included 38 key actors involved in US subnational GHG emissions trading policies, I identified governors George Pataki of New York and Arnold Schwarzenegger of California as the main policy entrepreneurs driving the inception and adoption of the Northeastern Regional Greenhouse Gas Initiative (RGGI) and the Western Climate Initiative (WCI), respectively. No single strong gubernatorial entrepreneur was identified for the Midwestern Greenhouse Gas Reduction Accord (MGGRA), which was adopted but never implemented and died a silent death. In the case of RGGI, two additional governors—Mitt Romney of Massachusetts and Chris Christie of New Jersey—were identified to have played a role that could be seen as a variation of entrepreneurship, namely strongly advocating against their state’s adoption of a GHG emissions trading policy. 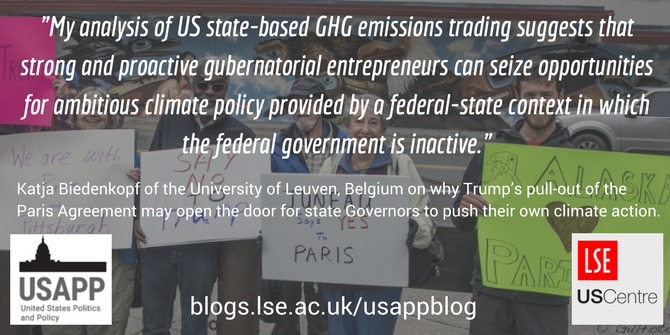 “Resist Climate Change Denial 434” by Gillfoto is licensed under CC BY NC SA 2.0

Career advancement interests appear to have been a major motivation for governors Pataki and Schwarzenegger’s entrepreneurial and also governors Christie and Romney’s obstructing activities. Governor Schwarzenegger’s actions also show that he likely acted out of personal ideational motivation. Pataki’s position on climate policy has changed over the course of his political career. In the 2016 race for the US Presidency, his position had changed from his earlier role as entrepreneur in pushing for RGGI, suggesting that the motivation behind his earlier entrepreneurship was career advancement rather than his own ideational conviction. Unlike Pataki, Schwarzenegger shows continuous commitment and support for ambitious climate policy. His persistent engagement in the issue strongly suggests that Schwarzenegger’s motivations for his gubernatorial entrepreneurship included personal ideational convictions in addition to crafting his legacy. Christie changed his position on climate policy in the run-up to the 2012 presidential elections suggesting career advancement motivations for his activities. Governor Romney’s obstruction of GHG ETS adoption in Massachusetts can also be attributed to career advancement motivations since it coincided with his joining the presidential race.

Most survey participants mentioned federal-state dynamics as one of the triggers of the respective program’s inception (RGGI 82 percent, WCI 92 percent, MGGRA 100 percent). There is, however, a clear difference in terms of proactive and reactive entrepreneurship. In the case of RGGI, proactive triggers were almost exclusively mentioned while in the case of WCI slightly more proactive than reactive triggers were mentioned but both figured prominently in the interviewees’ explanations. In the case of MGGRA predominantly reactive incentives were mentioned. The period between 2007 and 2010 was a time during which the adoption of a federal law seemed likely. The adoption of the MGGRA falls within this period of time. WCI was concluded in early 2007, meaning it is a borderline case.

The federal context thus created two different windows of opportunity for gubernatorial entrepreneurship. During the time of federal inaction, strong proactive gubernatorial entrepreneurs could seize the opportunity to craft a national profile and lead the way for federal policy. During the time of anticipated federal climate policy, additional governors engaged in weaker reactive entrepreneurship trying to shape future federal policy according to their respective state preferences and interests. Both 2008 presidential candidates were in favour of adopting federal climate legislations, including GHG emissions trading and a 2007 Supreme Court ruling requested the federal Environmental Protection Agency to revisit its Bush-era decision not to designate CO2 as an air pollutant.

President Trump’s dismantling of US federal climate policy has started to open a new window of opportunity for strong and proactive gubernatorial entrepreneurs but also other policy-makers’ entrepreneurship. If they are motivated by the necessity of climate action rather than by a motivation to increase their prominence, construct a legacy and advance their career, then their efforts could endure and yield lasting results. If the US is to continue to remain committed to climate mitigation, then a number of strong gubernatorial entrepreneurs seem necessary to counterbalance the federal government’s activities.