Presidents, in the form of executive orders and other forms of rulemaking, have substantial unilateral policymaking powers in the United States. The Constitution provides for checks and balances, but presidents frequently craft important policies without substantial input from Congress or the judicial branch. On one hand, this behavior appears to circumvent the constitutionally mandated division of powers and enable the president to excessively centralize power. On the other hand, as we saw in the latter years of the Obama administration, unilateral executive powers can also provide a tool for coherent and timely policy when congressional gridlock and polarization cripple federal policymaking.

Should we worry about unilateral executive powers? Or should we celebrate them as a way to overcome congressional squabbling and inertia?

In light of these tradeoffs, we want to know whether political institutions can discipline politicians by allowing for unilateral policymaking when it is useful, but discouraging harmful unilateral action. Democratic elections have long been celebrated as a tool for citizens to select the best politicians and hold them accountable. Yet, it is also well-known that elections can encourage behavior aimed at increasing a politician’s chance of reelection (or ‘office-seeking’), but which also runs against the public interest.

On the other hand, unilateral powers make voters worse off if existing conditions are good. In this case, incumbents may act unilaterally to “show off” their policymaking skill for electoral gain at the expense of voters. My analysis shows how elections can encourage socially harmful executive orders even when politicians are fully informed about the consequences, politicians and voters have identical policy preferences, and voters observe prior to the election whether unilateral action improves upon existing policy or policies that are not formulated by the executive.

To illustrate with a stylized example, consider US foreign policy. Here, the president has substantial control in practice and by law, as developed in Article II of the Constitution and in subsequent Supreme Court rulings. Presidents vary in their ability to communicate with military leaders, manage civil-military relations, or to determine the appropriate level of escalation. They also have many unilateral foreign policy instruments – such as national security declarations, executive orders related to the use of force, or executive agreements – that demonstrate their ability to voters, many of whom are aware of both international conditions and foreign policy decisions because these topics receive extensive media coverage. Additionally, voters prefer to avoid unnecessary conflict and want to elect effective politicians. 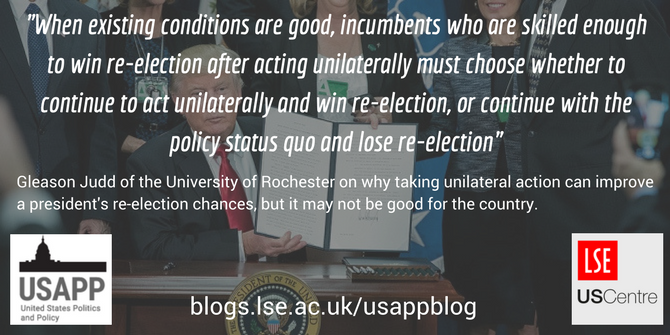 Surprisingly, electoral pressures can lead a president who is highly skilled at, for example, military diplomacy or civil-military relations to knowingly initiate conflicts that make voters worse off.  This perverse behavior does not require the president to have different policy preferences than voters or lack information about the consequences of unilateral policy. It is driven by an electoral bias in favor of unilateral policymaking that arises from strategic behavior by voters. Even if voters are not generally favorable of unilateral action, it can provide them with useful information about the officeholder’s capabilities. This bias is consistent with evidence that (i) voters have high expectations for presidential involvement in policymaking and (ii) unilateral action is crucial for re- election.

Thus, when existing conditions are good, incumbents who are skilled enough to win re-election after acting unilaterally must choose whether to continue to act unilaterally and win re-election, or continue with the policy status quo and lose re-election. Electoral considerations create the dilemma for elected executives that choosing the best policy today may result in losing re-election.

I also find that officeholders are more inclined to show off when holding office is more valuable. This suggests that political executives in more prestigious offices, such as presidents and governors, have stronger incentives to show off than executives in less prestigious offices, such as mayors. Motivating politicians to curry favor with voters can backfire and leave the voters worse off.

Viewed in a positive light, however, high-ability incumbents are more likely to be re-elected in prestigious offices because they are more inclined to show off, despite the short-term policy costs, in order to continuing reaping the perks of office. If holding office is valuable enough, then highly capable incumbents are always re-elected, but voters are worse off because undesirable unilateral action is more likely. In my analysis, the two classic objectives of democratic elections, disciplining officeholders and selecting the best candidate for the job, are at odds: bad behavior in office may improve electoral selection.

Why it can be good for a President to show off

My analysis also provides an explanation for why officeholders can win re-election after unilateral actions that clearly leave voters worse off. Survey evidence indicates that voters generally disapprove of unilateral action. This public view is puzzling in light of the apparent electoral benefits of unilateral policymaking in practice, but consistent with the logic of showing off. When conditions are good, incumbents may act unilaterally to reveal their ability, even though it leaves voters temporarily worse off, and win re- election. In these instances, the public disapproves of the unilateral action because it makes current conditions worse, but they nonetheless re-elect the incumbent because of her demonstrated abilities. In practice, public opinion alone may not always be a powerful weapon against undesirable unilateral policymaking, although it can discipline unilateral action by low-skill officeholders.

Given the relative prosperity of the US, along with the prestige and perks bestowed upon governors and presidents, those who express concern about excessive unilateral policymaking may be justified. Alternatively, gridlock and polarization plague Congress, possibly reducing the quality of the policies they develop, and unilateral executive powers are a possible workaround.

Gleason Judd – University of Rochester
Gleason Judd is a PhD candidate in the Department of Political Science at the University of Rochester. His research and teaching interests are formal political theory, political economy, and American institutions. He studies how democratic political institutions shape executive and legislative policymaking, using formal theory and statistical tools.