How legislators use state constitutions to block policy changes they oppose

How legislators use state constitutions to block policy changes they oppose

Political polarization is now part of the character of much of US politics, with many states enacting policies which reinforce legislators’ ideological views. In new research on state prohibitions on same-sex marriage, Daniel Fay finds that state lawmakers pursued constitutional amendments, despite the policy often already being enshrined in state law. He writes that states were more likely to adopt such amendments when nearby states were enacting pro-LGBT policies, and when legislators wished to publicize their view on an otherwise dormant policy issue.

As US citizens and politicians continue to become more polarized across political party lines, it has become clear that legislators often exert a great deal of effort to block the opposition’s policy in addition to pursuing their own political agenda.  Recently we have seen politicians attack opposing political parties rather than rebuke accused sex offenders from the same party. Although many social scientists across disciplines examine the mechanisms behind the spread of similar policies across jurisdictions, few have looked at defensive policymaking.  Generally they demonstrate that policymakers respond to previous policy adoptions in other jurisdictions by adopting similar policies.  However, in these polarized times in American politics and policy, policymakers may also respond to policy adoptions in other jurisdictions by enacting rigid institutional constraints that prohibit similar policies within their own areas.  A defensive policymaking strategy could explain policy change in areas such as recreational marijuana, gun-rights or land-use policy.  Each of these issues are commonly legislated on the state level, are highly contentious and have a wide range of legislative solutions across the states similar to same-sex marriage policies and LGBT rights.

Policymakers and citizens use the state constitutional amendment process to prevent policy changes from occurring in their own jurisdiction because only subsequent amendments or action from the Federal government can override the state constitution.  If a state legislature sees policy change in other jurisdictions coming from the action of non-legislative actors, the constitutional amendment process codifies legislative preferences and makes the jurisdiction immune from executive, judicial or even future legislative efforts at policy change.  State legislatures used the amendment process to reinforce opposite-sex marriage policies within their states in the early 2000s.  Interestingly, almost 90 percent of states that ratified same-sex marriage prohibitions in constitutions had existing legislative prohibitions.  These amendments therefore did not change the current policy in the states, but rather protected the definition of marriage from future change.

First and most importantly, prohibitive same-sex marriage amendments were more likely in states with neighbors that enacted pro-LGBT policies.  Specifically as a state adopted hate-crime legislation protecting sexual orientation its neighbor’s legislature was 29 percent more likely to adopt a constitutional amendment prohibiting same sex marriage in the future.  This relationship demonstrates the fear across the country that state judges would continue to legalize same-sex marriage regardless of citizen preferences. 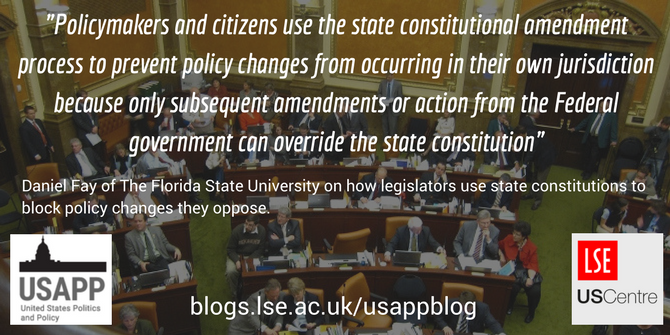 “Legislature” by Mike Renlund is licensed under CC BY NC SA 2.0

In addition to the desire to “protect” jurisdictions, legislators also use the amendment process to publicize their view on a previously dormant policy issue.  In order to be put in place, constitutional amendments require citizen participation in the form of direct democracy. Many states also require policymakers to publicize potential amendments for a significant period prior to the citizen referendum.  These issues are therefore highly visible and law makers can win future votes by identifying themselves as an opponent or advocate for a contentious, but previously decided issue (as was the case with same-sex marriage).  This process also minimizes any potential costs to the legislators because citizens ultimately decide constitutional amendments. A lawmaker can frame support for a controversial amendment as a means to allow citizens to decide the issue.

Despite the potential gains and minimized costs, not all state-based policymakers should pursue constitutional amendments as legislative goals. Constitutional amendments require significant time and political capital to ensure success.  Policymakers that do not expect reelection, therefore should avoid this process.  Instead these legislators should use what little political capital they have to quickly enact general legislation in an attempt to codify their own policy preference rather than be subject to the preferences of those that will replace them.  Political parties with established security in the statehouse should therefore be most likely to choose the constitutional amendment process to protect their jurisdiction from other policymakers.

In these trying political times we should expect future policy that is designed to prevent future policy change.  When politics become so focused on making the other team lose and dismantling previous policies, rational policymakers should continue to use legal institutions to stabilize their preferred policy and prevent future change. As the sands shift in our political landscape we continue to see various policies designed to grant or limit LGBT rights. A groundswell of affirmative policies could motivate another countermovement similar to the early 2000s that actually restricts future LGBT rights.