In The Militant Muse: Love, War and the Women of Surrealism, Whitney Chadwick explores how a number of women within the Surrealist movement fought to move beyond the confining role of muse to establish themselves as groundbreaking artists in their own right. Covering the lives of figures including Frida Kahlo, Claude Cahun and Valentine Penrose, this immersive and captivating account challenges the marginalisation of these women within the Surrealist movement and offers insight into the formative power of female friendship, determination and support, writes Vanessa Longden. 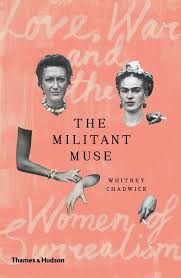 ‘What did it mean to be young, ambitious and female in the context of an avant-garde movement defined by men?’ Whitney Chadwick’s new publication, The Militant Muse: Love, War and the Women of Surrealism, is the culmination of six years of attentive research, drawing on letters, poetry, artworks and interviews to weave an immersive narrative of five female friendships among the Surrealists across a twenty-year timeframe from 1930 to 1950. Set against a backdrop of war, loss and trauma, Chadwick’s book offers readers a captivatingly rich account of female love, determination and support as these individual women transitioned from muses to artists.

Some of the characters, including Frida Kahlo, Claude Cahun and Lee Miller, will no doubt be recognisable to many readers, whether they are versed in Surrealism or not. Other protagonists, such as Leonora Carrington, Jacqueline Lamba Breton, Leonor Fini and Valentine Penrose, may be less well-known. The book engages across a wide audience: the language and concepts are accessible for a general readership, but the text is comprehensive enough for an academic audience as well. Chadwick begins by introducing her ‘cast of characters’, listing ‘The Women’, ‘The Men’ and ‘The Dealers’ of the Surrealist movement. This not only acts as a useful reference point, but also sets the tone of the publication, which explores the performative and complex identity of women artists. Additionally, Chadwick refers to the characters by their first names, an act which challenges the depersonalising tendency of only using surnames in academic writing.

The role of the muse in art history is contentious. She is rendered an inspirational yet superficial figure: exulted as the ideal feminine beauty, the muse is objectified by the (traditionally) male artist, which reinforces her passive position. While some of Chadwick’s women accepted their roles as muses, many used this position to their own advantage, gaining elevated social status or greater independence from their husbands as they forged their own artistic careers. Frida, for instance, said that she let her husband, Diego Rivera, ‘play matrimony with other women’, recognising that theirs was not a conventional conjugal relationship (109). The women in the book were highly aware of the gender and social ideologies that restricted their agency, but they also refashioned this role to their own advantage.

In addition to rebelling against the men who attempted to define them, the women in Chadwick’s account make clear how the position of the muse is also unattainable. Her image is exaggerated and projected into fantasy. The muse becomes phantasmagorical: she is both recognisable, yet simultaneously impossible to embody fully. This may be the nature of Surrealism itself, to blur the division between dream and reality, but why marginalise these women when their histories are so complex and vibrant? These figures should not be celebrated for their inspirational roles alone; they should be remembered as the fiercely passionate women they were, and for the longstanding friendships they fostered. 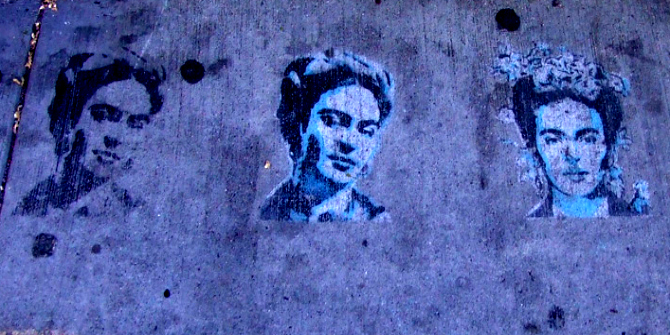 The women explored in the book were determined to make their way in the world as artists, writers and creatives, drawing on the cosmic and mythological powers of feminine sameness to challenge the Surrealist social order. This notion of feminine doubling is portrayed visually through Frida’s and Jacqueline’s carefully curated photographs and paintings. These friends communicated their growing autonomy from male artists through shared images of composed gestures and playful twinning, which blur the lines between friendship and sexual desire. The focus on sameness, not difference, became paramount in the women’s work as they attempted to claim a symbolic language independent from that of their male colleagues and lovers. Here, it should be noted that Chadwick’s thorough descriptions and close analysis of images within the text are extremely valuable, as they offer further insight into the women’s lives and add a deeper layer of significance to her arguments. Images, like militant muses, do not merely play a supporting role.

Artistic autonomy was also achieved through the adoption and performance of androgynous identities. Through her paintings, Frida re-adopted androgyny, which she had experimented with in her teenage years. The portrayal of a masculine masquerade, Chadwick comments, often alluded to her unhappiness with Diego (111). But it also displays the mutability of a self which is not tied to notions of ‘fated gender’ or a superficial identity projected beyond the scope of reality.

Unlike the other women in the book, Claude Cahun’s path to Surrealism was different. She was praised by Surrealist figurehead André Breton for her enquiring intellect as opposed to her inspirational form (particularly interesting, given Breton’s exaltation of heterosexual relationships in L’amour fou (Mad Love, 1935)). Claude and her life-partner, Suzanne Malherbe, used androgynous self-imagery and achieved anonymity through their use of pseudonyms to challenge Surrealist (male) hegemony, gaining them significant intellectual freedoms. However, they also employed their fluid identities as forms of resistance in occupied Jersey, creating and distributing anti-war propaganda to troops under the pretence that women would never be so underhand.

The Militant Muse brings a new perspective to the political context of the Surrealist movement, but also highlights the personal battles that these women faced when achieving recognition and power. The author also implicitly explores the importance of women’s personal wanderings through shared landscapes, opening a further line of critical inquiry. Chadwick’s cast traverse both textual and geographical borders, which emphasises women’s shared experiences and constructs a highly interwoven narrative. For example, readers are taken on a journey of self-discovery and psychic wandering through Valentine’s engagement in transcendental customs in India, where she immersed herself in spiritual culture and tantric practices to reform her idea of the feminine as a powerful creative force. Therefore, Chadwick’s publication not only questions the role of love and support in the formation of artistic identity, but also emphasises how these female friendships stood the test of time despite geographical distance in the face of vast political uncertainty.

The visually stunning cover art should also be noted for the way it complements Chadwick’s argument. Fragments of Jacqueline and Frida are set against a light pink background. Only their faces and arms are on show as Jacqueline drapes an arm over Frida’s invisible shoulder; both women hold cigarettes and their gaze is focused towards the viewer. The removal of their torsos draws on Surrealism’s penchant for collage and directs attention away from the body. The women appear to be at the point of transformation: they are becoming artists of their own accord influenced by their personal battles. While the women of Surrealism praised and supported each other’s endeavours, they never placed one another on a pedestal.

Vanessa Longden – Durham University
Vanessa Longden is a Leverhulme-funded doctoral candidate, researching Visual Arts and Culture at Durham University. Her thesis readdresses the spatial representation of Francesca Woodman’s photography in the cultural context of 1970s New York. Longden has presented her work internationally, and recently published ‘Whispers of escapades out on the “D” train’: The Entangled Visions of Cindy Sherman’s ”Untitled Film Stills”’ in Mediated Pasts: Visual Cultures and Collective Memory, McFarland & Co Inc. (2017). For the past three years, she has acted as Editorial Assistant for The Journal of Historical Sociology (Wiley-Blackwell). Read more by Vanessa Longden.