Words matter; different terms and phrases can be a huge influence on how the public things about important issues. For example, the term “homosexual” is more likely to be used to identify a group who some feel are outside of society, while “gay and lesbian” are much more inclusive terms. In new research, Brianna A. Smith and colleagues examines how these words can shape how people feel about civil rights policies. They find that compared to “gay and lesbian,” “homosexual” cues certain people to increase their opposition to civil rights policies that benefit gay men and lesbians.

Language isn’t neutral. The words that the media, voters, and policymakers use can drastically change public opinion. For example, more Republicans disapprove of Obamacare than the Affordable Care Act – even though these are two names for the same policy.

Our research shows that important differences between the terms “homosexual” and “gay and lesbian” shape public opinion on civil rights policies. In a historical review of words used to describe gay men and lesbians, we find that the term “gay” has been used by advocacy groups to signal pride and acceptance of sexual identity. The more clinical term “homosexual,” on the other hand, has been used to pathologize and stigmatize same-sex desire.

The terms we use for sexuality matter because they signal group identity. “Gay and lesbian” is more likely to be used to describe friends, relatives, or neighbors. “Homosexual” is a strong marker of outgroup identity, or belonging to a group that is other from us and who live outside of our society.

Public opinion on gay and lesbian rights has changed a dramatically over time, but the divided use of the terms “homosexual” and “gay and lesbian” remains. As recently of August 2017, pamphlets in Australia used the word “homosexual” to emphasize the supposed deviance of same-sex marriage ahead of a referendum on marriage equality. At the same time, positive coverage typically used “gay and lesbian” to describe the couples affected by the referendum.

We expect that people high in authoritarianism are more sensitive to language that signifies group distinctions. Authoritarianism is a personality trait which involves a greater desire for social order and conformity. Authoritarians keep outgroups at a distance in order to preserve this conformity. Past researchers tested whether authoritarianism alone increases hostility to “homosexuals” compared to “gays and lesbians,” but found mixed results.

The missing piece is that the perceived social order can differ from person to person. For some straight (or heterosexual) people, “homosexuals” are clearly outside of the norm; for others, so-called “homosexuals” are actually part of their social group. The word “homosexual” should most negatively affect the attitudes of authoritarians who also view gay men and lesbians as an outgroup.

To test this theory, we leverage a simple experiment contained within the American National Election Studies (ANES) 2012 survey. All participants were asked about their opinion on two civil rights policies affecting gay men and lesbians. However, for half of participants the policy questions referred to “homosexuals,” while the other half were asked about “gays and lesbians.” By comparing participants’ attitudes about the “homosexual” policy to participants’ attitudes about “gay and lesbian” policy, we are able to test whether the word “homosexual” cues group identity when determining policy positions. 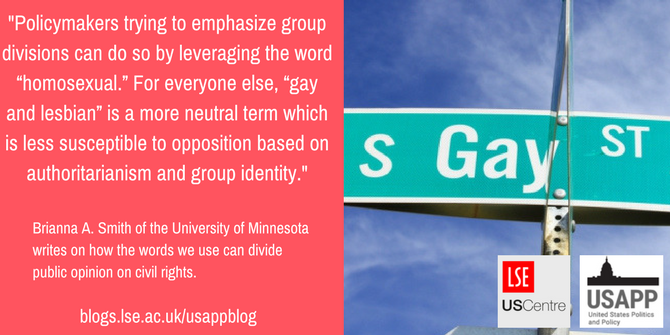 “Gay Street, Knoxville” by Wyoming_Jackrabbit is licensed under CC BY NC SA 2.0

We identify two factors that are associated with people’s perceptions of ingroups and outgroups. First, we directly measure whether or not people have lesbian, gay, or bisexual acquaintances. Second, our historical research shows that the word “homosexual” is often used in Born Again Christian churches to combat the cultural acceptance of gay men and lesbians. Because of this, we expect Born Again Christians to be more likely to view “homosexuals” as an outgroup.

Authoritarianism is measured using four hypothetical questions about parenting style. While these questions are not explicitly political, they do predict desire for conformity and hostility to outgroups. If our theory is correct, authoritarians who don’t know any gay men or lesbians, or who are Born Again Christians should be more hostile to policy that benefits “homosexuals.” 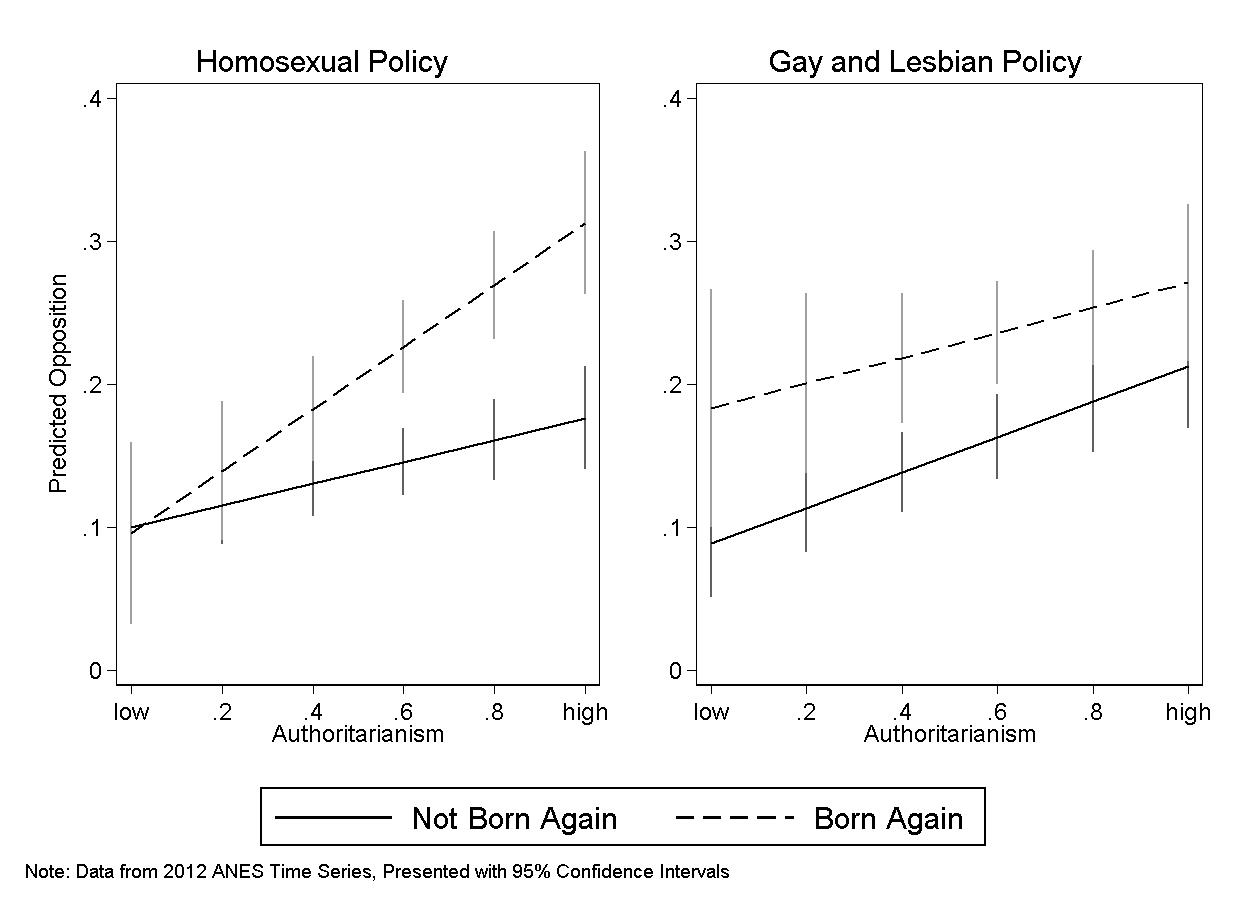 Figure 2 – Interaction between having lesbian, gay or bisexual (LGB) acquaintances and authoritarianism, predicting opposition to “homosexual” or “gay and lesbian” policy 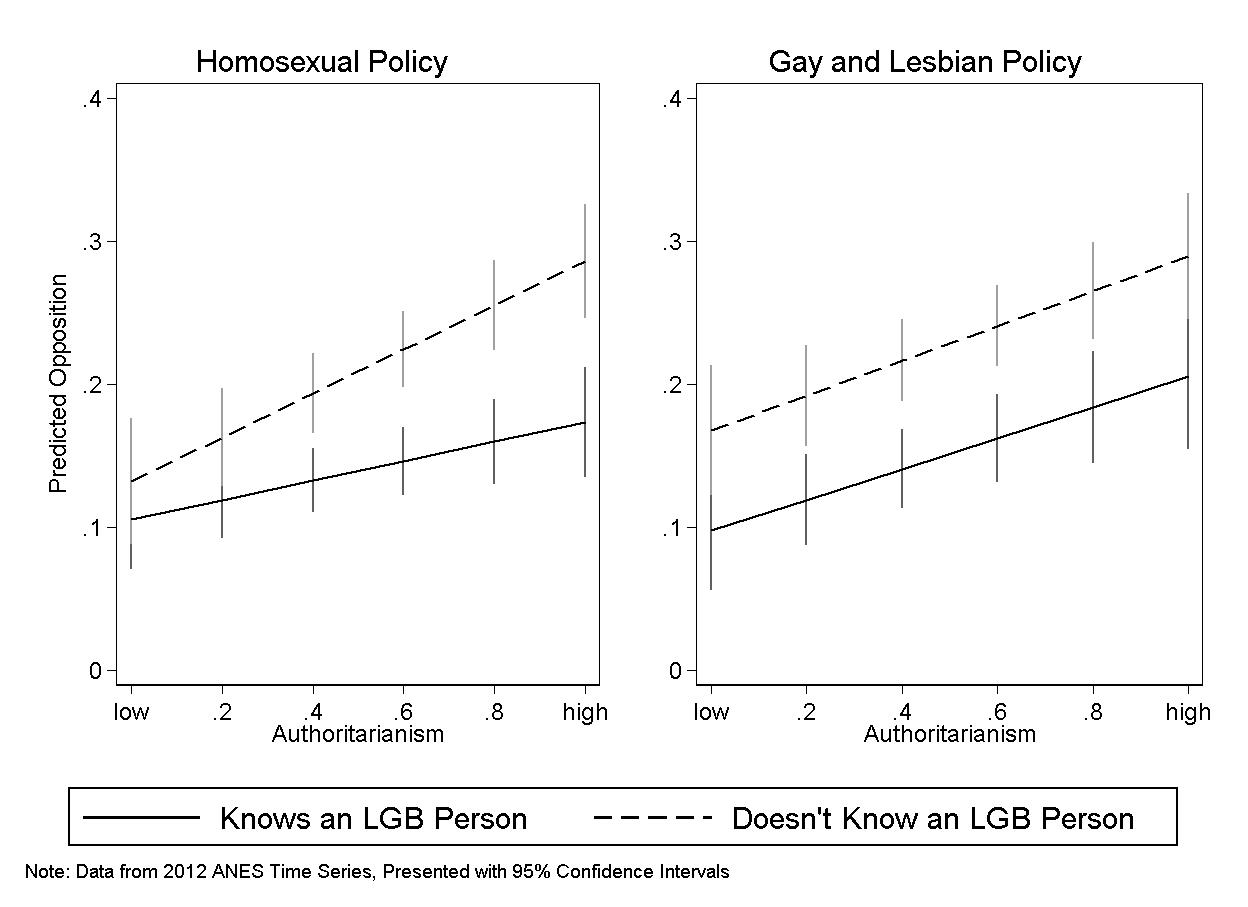 Our research shows that the use of the word “homosexual” divides public opinion. This language does not simply make everyone feel more negative about civil rights policy. Rather, it increases opposition among those who both view gay men and lesbians as an outgroup and are predisposed to dislike outgroups. For those who attach less importance to group divisions (i.e. low authoritarians), the use of divisive language may actually decrease opposition – perhaps because it reminds them of the existence of prejudice, which they wish to distance themselves from.

The words we use to talk about gay men and lesbians can shape public opinion. Policymakers trying to emphasize group divisions can do so by leveraging the word “homosexual.” For everyone else, “gay and lesbian” is a more neutral term which is less susceptible to opposition based on authoritarianism and group identity. By recognizing the importance of language, we can communicate more effectively about policy and combat attempts to manipulate opinion and divide the public.

Brianna A. Smith – University of Minnesota
Brianna A. Smith is a PhD Candidate at University of Minnesota. Their research incorporates theories of psychology and decision making to better understand the complex ways people form political opinions and participate in politics. Their dissertation focuses on the impact of threat on participation and polarization in American politics.