This week saw Democrat Doug Jones win Alabama’s US Senate special election against Republican Roy Moore. Andrée E. Reeves writes that Jones was able to clinch this upset victory by avoiding personal attacks and energizing turnout, especially among African Americans, young people, and women. She comments that the Democratic Party’s base has now been similarly animated, while those like Donald Trump and Steve Bannon, who had endorsed Roy Moore despite the allegations of sexual abuse against him, have emerged from the contest with even more political baggage.

On Tuesday, Democrat Doug Jones prevailed with 671,151 votes to Republican Roy Moore’s 650,436. Another 22,819 voters cast write-in ballots. Moore, the infamous “Ten Commandments Judge” will not concede defeat. Absentee ballots will not be counted until the December 18 deadline for receiving them. Alabama also has a procedure for provisional votes, when someone’s eligibility or registration is questioned or the voter does not produce the required valid government-issued identification.

Alabama state law provides that if the candidate vote totals are within one half of one percent of each other, an automatic recount will be triggered. The difference between these two candidates is about 1.5 percent. It is not clear that recounts are allowed if the margins are greater than 0.5 percent.

There is some confusion about whether Moore can even demand a recount: according to election law expert Rick Hasen, Alabama’s election law states that a request for a recount is only allowed in contests for offices qualifying under “grounds of contest.” Congressional seats are not mentioned. The ultimate judge of an election for the US Senate would be the Senate itself. Under Article I of the US Constitution, “Each House shall be the judge of the elections, returns and qualifications of its own members.”

Further adding to the uncertainty, Alabama Secretary of State John Merrill, who oversees elections in the state, has suggested that Moore is in fact able to request a recount. If in the event that Moore is allowed to request a recount, he will have to post a bond to cover the cost within 48 hours of the vote certification. If the results go in his favor, the state will foot the bill. If the outcome does not change, he will have to pay.

Secretary of State Merrill has stated that even if there is a recall, the result probably would not change. Moreover, state law holds that if the vote-count margin is greater than the number of write-in votes, the write votes are not counted. Merrill stated that the final tally will not be certified until at least December 26 and no later than January 3, 2018.

Moore gets religion on rules

After the election’s results were announced, Moore told his cheering crowd that “Realize when vote is this close, it’s not over and we still have to go by the rules.” He went on to say, “”That’s what we’ve got to do is wait on God and let this process play out. The votes are still coming in. We’re looking at that.” All this is coming from a man who otherwise pays scant attention to rules, having been twice thrown out of office as the state’s Chief Justice after defying Supreme Court orders.

Doug Jones faced an uphill battle. He’s often been called a long shot. He started in a deep hole. Alabama is one of the most—if not THE most—Republican states in the nation. Donald Trump won 62 percent of Alabama’s vote in 2016. Jones is a low-key, amiable fellow who managed not to engender the ire of the Republicans to such an extent that they would actively campaign against him. He is almost the anti-Moore, even though they share some characteristics such as Christianity and a love for guns. Jones embodies everything Moore does not.

Jones had several things he needed to accomplish to climb out of the hole he started in. First, he needed to energize his base. With a little help from recent Democratic wins in New Jersey and particularly Virginia, he ran an extraordinary voter turnout drive. Overall turnout, at approximately 40 percent, was remarkable for a special election. Future Democratic candidates in red states would be well advised to take a page out of his playbook.

To the extent that his campaign was negative, it was only in the last few days, and he avoided personal attacks, sticking to what the Moore campaign had said about his own views on late term abortion and guns. He stuck to his economic message and managed to stay above the fray.

In the last week of the campaign, African American luminaries such as former Massachusetts Governor Deval Patrick, New Jersey Senator Corey Booker, and legendary NBA legend Charles Barkley campaigned with Jones. The state NAACP chapter, among other groups, also made heroic efforts to get out the vote. 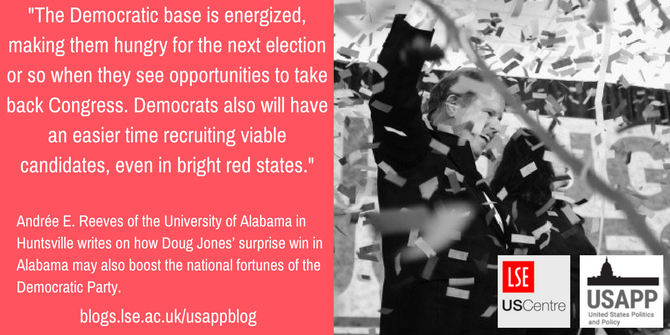 “Doug Jones election watch party” by Jamelle Bouie is licensed under CC BY 2.0

Jones needed the support of women

Women make up just over half (51 percent) of the electorate in Alabama. They favored Jones (57 percent) by 16 percent over Moore. Men, on the other hand, displayed a 14-point preference for Moore over Jones, with 56 percent of men casting their ballots for Moore. Black women, on the other hand, were Jones’s biggest fan base. They comprised 17 percent of the electorate and brought Jones over the top by voting 98 percent in his favor.

After initially endorsing and campaigning for current Senator Luther Strange in the Republican primary, Trump came out in support of Moore, claiming he did not believe the women accusing Moore of sexual misconduct.  Trump did not campaign in Alabama, but he got as close as he could at a rally in Pensacola, Florida last Friday.

When asked in exit polls what one reason was for their vote, 27 percent responded that they wanted to express support for Donald Trump. Of those, 97 percent voted for Moore. The 19 percent who wanted to express opposition to Trump voted 94 percent if favor of Jones. The simple majority of voters who said that Trump was not a factor voted 14 percent more in favor of Jones, 56-42 percent.

In the Post poll, a high level of disapproval of Trump among Jones supporters was apparently a major factor motivating many of them to vote. For many other voters, particularly Jones backers, Trump was not a factor in their voting decisions. A CBS News exit poll found that for 54 percent of Jones voters and 41 percent of Moore voters, this election was “not about Trump.”

Breitbart guru and former Trump chief strategist Steve Bannon inserted himself into this race full bore. Not only did he endorse Moore, he came to Alabama to campaign and raise money for him. He also used his website, Breitbart.com, to promote Moore and disparage Jones. Bannon’s full throated support was accompanied by his baggage—Alt Right, racist, anti-establishment.

An MSN.com article quoted a 24-year old, African American divinity student observing Moore’s version of Christianity, arguing that it did not share the vision of most of the civil rights leaders “whose blood was shed on Alabama soil.” He said that Moore’s conception “sanctifies the truth-making power of white men’” and was “really just a masquerade for white supremacy.”  Bannon has emerged from the race with even more baggage. Now one of the places Trump is placing blame for Moore’s loss is squarely on Bannon’s shoulders.

Democrats win either way that this race finally ends. The Democratic base is energized, making them hungry for the next election or so when they see opportunities to take back Congress. Democrats also will have an easier time recruiting viable candidates, even in bright red states.

The fact that Doug Jones got more votes in a heavily Republican/conservative state gives them hope that they can achieve the same outcome in other states. They also now have a successful model on how to run a winning race in a state heavily controlled by the opposition. Moreover, they can hang Roy Moore (and Donald Trump) around the necks of all the Republican officeholders and candidates who did not disavow him.

Yes, Republicans are down a vote in the Senate. But they do not have to rely on a notoriously unreliable Roy Moore as their winning vote; they still have a majority. And many, particularly establishment Republicans, who disavowed Moore and tried to find ways to get him off the ticket, can claim the moral high ground in the next couple of elections. Those who stood by him will have to grin and bear the association with Moore and his controversial behavior and stances.  The Republican National Committee will face continued criticism for cutting off—and then renewing—support for Moore.

The people of Alabama and around the world eagerly anticipate the certification of the election results so we can move on from this controversy. There are important problems to address, and distractions such as those in this election command an inordinate amount of time and energy to entertain and sustain.