The past two months have seen significant electoral wins for the Democratic Party – first in Virginia and New Jersey, and now in last week’s special senate election in Alabama. Nathaniel A. Birkhead writes that the Democratic Party may be well positioned for the 2018 Congressional midterm elections if it keeps up its recently successful tactics: focusing on increasing turnout via fieldwork, and selecting quality candidates with electoral experience.

Last week’s special election to fill the Alabama Senate seat left vacant by Jeff Sessions attracted enormous attention from politicians and the media.  Part of the attention was based on the nature of the race itself, which pitted scandal ridden former Judge Roy Moore against former US Attorney Doug Jones.  This election did not occur in a vacuum, however, and thus part of the widespread attention was on what the campaign and result might mean for the 2018 midterms.  Broadly speaking, this instinct is well founded: trends in special elections do carryover into the general election, particularly in recent years.

The most striking result in the Alabama special election was the turnout differential between Democrats and Republicans.  Simply put, Democrats turned out to vote at a very high rate, while many Republicans stayed home.  For context, turnout in special elections is about 15-30 percent lower than the most recent regular election. 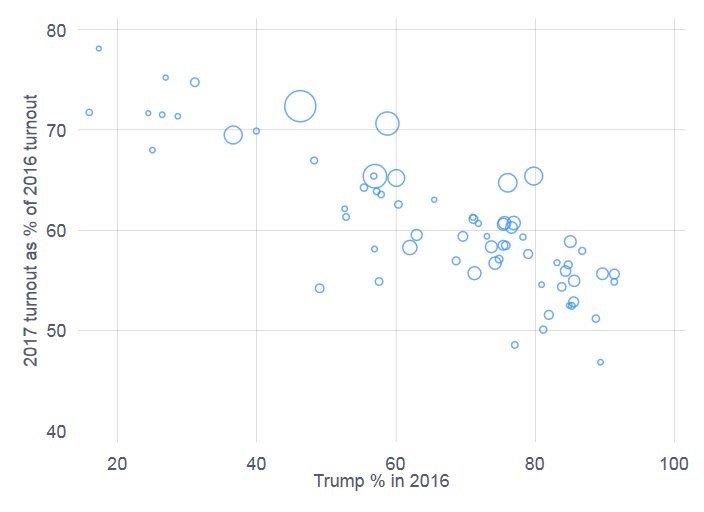 As the chart above by Charles Stewart shows, turnout in heavily Democratic areas roughly fit this trend.  By contrast, turnout in heavily Republican counties dropped by quite a bit more: in some areas turnout was half of what it was in 2016.  Moreover, this differential in the Alabama Senate race was not unique: turnout among Democrats was high in the Virginia’s November gubernatorial election and special elections in Kansas and Montana, as well.  While it is common to see some turnout drop-off for the president’s party in a midterm election, particularly when the president is unpopular, the results this year have been dramatic.  The differences in the ability to re-engage presidential voters is reason for optimism among Democrats, and cause for concern among Republicans heading into next year’s midterm elections.

The Back-to-Basics Democratic Organizational Effort May be Paying Off

The Democratic Party’s ability to translate President Trump’s low approval ratings among blacks and well-educated whites into votes may be helping drive this turnout differential.  As Joshua Darr noted, from 2008-2016, Democrats moved away from a focus on the “ground-game” in politics, and rather put campaign resources into advertisements.  Following the 2016 election, groups supporting Democrats have re-engaged with community organizers, and increased their focus on fieldwork.  In the 2017 Virginia general elections, the new focus on canvassing did not just help the Democratic candidate for Governor Ralph Northam, it also helped the party make gains in the Virginia state legislature.

In Alabama, the Jones campaign benefitted tremendously from the organizational work of the NAACP and other grassroots organizations, as black voters – especially black women – were pivotal to Jones’ success.  The NAACP and other groups (including fraternities, sororities, and churches) adopted a more energetic approach than they did in 2016: helping people get registered to vote, get the right forms of identification, and helping them to the polls. The early returns on the Democrats’ renewed focus on the unglamorous work of canvassing suggest that they are situating themselves well heading into the 2018 midterms.

There should be a Partisan Gap in Quality Challenger Emergence

In the 2017 elections – including the special elections to fill vacancies, and the regular general elections in New Jersey and Virginia – Democrats have often dramatically exceeded expectations.  Consequently, far more Democratic candidates have decided to run in the 2018 midterm elections than have in recent years, positioning the Democratic Party to capitalize on the turnout differential and pick up seats in what are commonly uncontested elections.

While not all these candidate will have a real chance, the emergence of quality candidates with previous elected experience, like Alabama’s Senator-elect Doug Jones, or former Tennessee governor Phil Bredesen who will run for Bob Corker’s vacant Senate seat, are certainly good signs for Democrats.  By contrast, given the unfavorable electoral climate for Republicans, we should expect to see fewer quality challengers attempting to run for higher elected office in 2018, preferring to keep their powder dry for a more favorable electoral climate in 2020 or 2022. 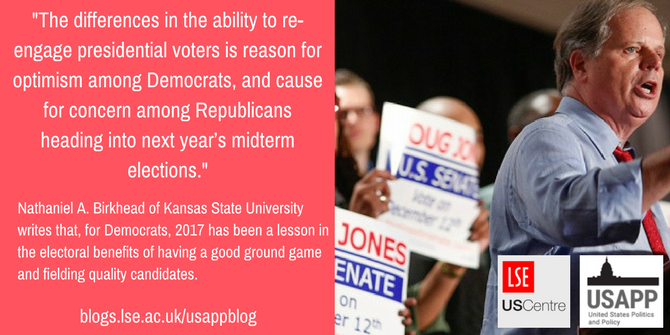 The Elephant in the Room for Republicans

Along these same lines, the 2017 Alabama election showed how much damage a bad candidate can do for a party.  The write-in campaign against Roy Moore that Republican Senator Richard Shelby sponsored proved to be decisive in the election: roughly 23,000 voters came to the polls for the sole purpose of writing the name of some other candidate.  Though the official results won’t be certified for some time, unofficially Jones beat Moore by nearly 21,000 votes, meaning that the write-in voters helped prevent Moore from winning.  According to exit polls, none of the write-in voters were liberals, and all the write-in voters wanted to see the US Senate controlled by Republicans.  Thus, these write-in voters were almost certainly Republican leaning voters who would have supported Mo Brooks or Luther Strange, but could not stomach Roy Moore.

All That Said, Pump the Brakes a Bit

Considering the 2017 elections as a whole, the electoral climate is clearly shaping up to favor Democrats next year.  Nonetheless, it would be foolish to assume that the Republican Party is destined to lose control of either chamber of Congress.  The Senate map still favors Republicans in 2018 – as several Democratic senators are defending seats in Republican states – and it’s important to keep in mind how much partisanship influences voter behavior: Alabama exit polls show that Moore won 91 percent of Republicans despite his many flaws.  In fact, partisanship has such a powerful effect on voter behavior that 12 percent of Moore’s own voters had an unfavorable view of him and supported him anyway.

If the Republican Party is able to avoid running weak candidates like Moore, and turn voters out in 2018 midterms the way they had in the 2016 presidential election (something they have historically been better at than Democrats have), they may still hold the Senate.  On the other hand, if the large partisan turnout differential continues to persist, 2018 may be a particularly bad year for Republicans.

Nathaniel A. Birkhead – Kansas State University
Nathaniel A. Birkhead is Assistant Professor of political science at Kansas State University.  He studies issues of representation, legislative organization, and political behavior.  His research has appeared in Legislative Studies Quarterly, Political Research Quarterly, and American Politics Research and he is finishing a book (with Jordan M. Ragusa) examining when and why Congress repeals major laws.

December 20th, 2017|Elections and party politics across the US, Nathaniel A. Birkhead|0 Comments
Previous post Next post