The summer of 2017 saw attempts to remove Confederate monuments and symbols from public spaces in the South, some of which were met with resistance from far-right groups. Wanda Rushing writes that, as was the case in the 1960s, these monuments have become the focus for white supremacist rallies, which have in turn attracted worldwide attention. As communities grapple with what to do with their Confederate monuments, it is important that they consider the monuments’ histories, the role of white identity, and the implicit racial bias present in American society.

Confederate Monuments rise above town squares and roundabouts, dominate public parks, and line busy streets in US states that seceded during the Civil War.  A few such monuments and symbols also appear in such unlikely places as Boston Harbor in Massachusetts and at the National Cathedral in Washington, DC.  Others appear on university campuses, both private and public.  Civic-minded attempts to remove Confederate monuments and symbols from public spaces gained support and provoked opposition in 2017. Black Lives Matter protests since the police shooting of Michael Brown in Ferguson, Missouri (2014), and the South Carolina legislature’s decision to remove the Confederate flag from the state Capitol after a Charleston church mass shooting (2015), amplified demands for removing Confederate statues and symbols. But resistance to removal campaigns also intensified in 2017, most notably following the inauguration of President Donald Trump.

For decades, supporters of Confederate monuments in public places have claimed “heritage,” not “hate” as justification for keeping more than 700 existing monuments in place. Critics dispute these claims, arguing that Confederate monuments overlook memories of the inhumanity and brutality of slavery and the war fought to end it. Moreover, studies show that the strongest supporters of monuments know less about Civil War history than their opponents.  Events last August struck another blow at the “heritage” argument when self-identified white nationalists held a “Unite the Right” rally in Charlottesville, Virginia to protest removal of an imposing statue of Confederate Commanding General Robert E. Lee.  Waving Confederate battle flags alongside Nazi swastikas and bearing torches, more than 250 protestors, including former Ku Klux Klan Grand Wizard David Duke, chanted “White lives matter” along with anti-Semitic and misogynistic epithets. The march across the University of Virginia campus ended in deadly violence against counter-protestors, killing one person and injuring 34 others. The President’s equivocal response attributing blame to “both sides” evoked praise from white supremacist organizations, high disapproval ratings from Americans polled, and criticism from world leaders.  Now shrouded in black tarps, the statue waits for the City of Charlottesville to defend its removal decision in court against a lawsuit filed by white nationalists.

The Whole World is Watching

News of white nationalist activities in Charlottesville, particularly public displays of Nazi symbols and Confederate flags –the two most recognized symbols of white supremacy in the world – and shouts of anti-Semitic slogans, provoked international alarm.   “The whole world is watching” – a phrase used in the US Civil Rights movement in the 1950s, and in Vietnam War protests in the 1960s—once again gained currency. Fifty years ago Confederate monuments became prominent symbols of white resistance to the Civil Rights movement. Today the civil rights of immigrants, the poor, women, the LGBT community, and people of color face jeopardy in the United States.  Once again, these memorial landscapes have become scenes of white supremacist rallies, and the focus of global attention.   Today, in response to years of grassroots organizing, and demands to do the right thing, local governments and campus officials are more likely to openly question the presence of confederate memorials in public places.  Along with numerous civil rights organizations, academic organizations, including the American Historical Association, the American Sociological Association, and the American Association of University Professors, decry violence and offer support for removing monuments. 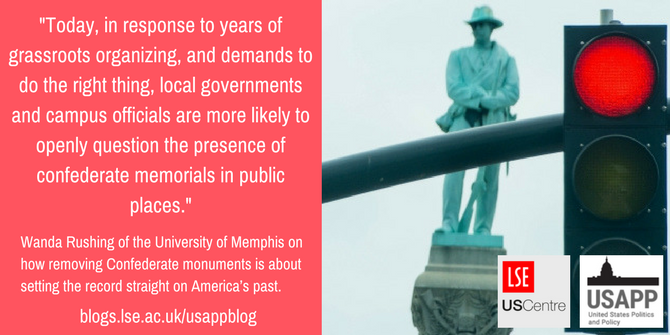 “Louisville puts the red light on a Confederate monument” by Don Sniegowski is licensed under CC BY NC SA 2.0

As communities consider options and imperatives for the removal and disposal of Confederate monuments and renaming public parks, we should keep in mind that Confederate monuments:  1) are sites of historical interpretation that require social context for understanding; 2) stand as scenes and symbols of white identity politics; and, 3) contribute to pervasive and on-going racial bias, producing far-reaching consequences.

Protests and counter-protests about Confederate memorials in public spaces create long-overdue opportunities for understanding and contesting historically embedded institutional processes affecting all Americans. The decisions to remove monuments can be costly.  The removal of four confederate statues in New Orleans, which included provisions for worker safety, defending the decision in court, and the actual removal, cost more than $2 million.  But many Americans have decided the time has come to set the record straight about America’s past and the biases inculcated by more than one-hundred years of statue-building and hero-worshipping produced by a backlash following the Civil War and Reconstruction.