Since the passage of the Patient Protection and Affordable Care Act (ACA), millions of low-income Americans have gained access to publicly funded health insurance. Yet, the American states have remained critical stakeholders in the Trump era for fighting persistently high levels of inequality in access to health care. Using data from the fifty states, Ling Zhu examines trends in market-based health care inequality in the past two decades, and finds that health care inequalities are greater the more racially diverse a state, and smaller in states with higher levels of social capital.

The American health care system is a “hybrid” system, whereby public and private providers exist alongside one another. More than fifty percent of non-elderly Americans obtain their health insurance coverage through private sources, either being sponsored by their employers, or by purchasing privately. As such, private market-based health insurance coverage varies substantially depending on people’s incomes. As Figure 1 shows, at the national level, market-based private health care coverage increases substantially as personal income increases. 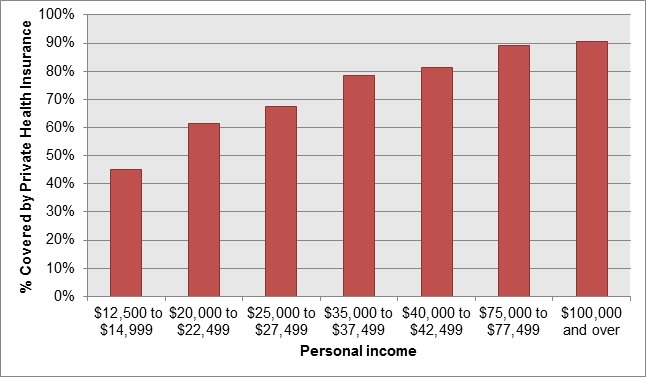 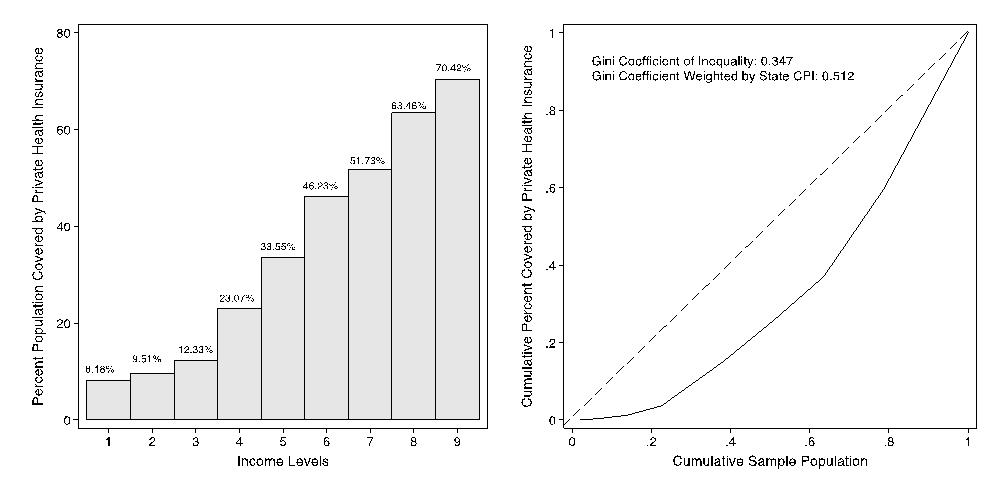 Data are based on the U.S. Census Bureau 2008 Current Population Surveys 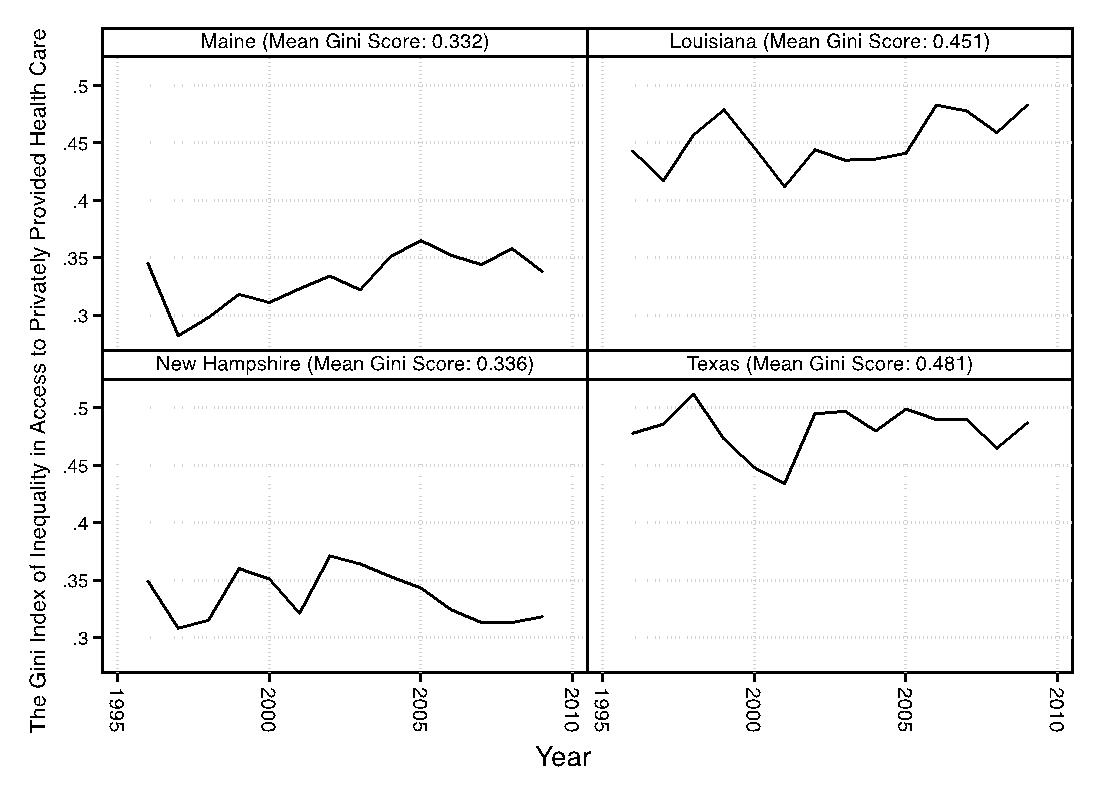 Using data on the fifty American states from 1996 to 2009, I find that both social capital and racial diversity of state populations are important social contexts for understanding income-based health care inequality.

Racial Diversity and Health Care Inequality. In America, race continues to be a determinant of unequal treatment across society. Both market-generated incomes and poverty are unequally distributed across racial groups. This market-based economic inequality is further reflected in health care, as the existing literature concludes that income inequality has a strong link to health care access and income-based differences in people’s health. Racial diversity also affects health care inequality through the policy making process. Extensive public opinion literature suggests racial prejudice coincides with a high level of tolerance for market inequalities and low level of support for welfare. And inter-group prejudice and racial-stereotyping might shrink political support for more redistributive social policies.

Social Capital Reduces Health Care Inequality. Social capital is an expansive concept that has received considerable attention in the study of public policy and politics. The concept of social capital has been developed by Robert Putnam’s, Making Democracy Work (1993) and Bowling Alone (2000). Social capital is broadly defined as an asset that is inherent in social relations, trust, and networks. Social bonds and community engagement, according to Putnam, firm the civic foundation of democracies and equalize social gaps in economic and civic realms. The underlying mechanism for the equalizing role of social capital is that social distance between the privileged and the marginalized can be reduced through building inter-group bonds. Civic engagement and volunteerism, meanwhile, promote egalitarian values and enhance governments’ capability in making liberal and inclusive social policies. Moreover, social capital can be linked to more equal allocation of public health care resources and more accessible health insurance coverage. The existing literature suggests states with a lower stock of social capital are unlikely to invest in the provision of social safety net programs in general. 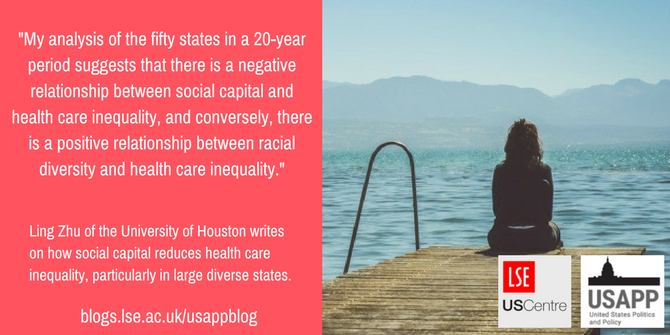 Photo by Paola Chaaya on Unsplash 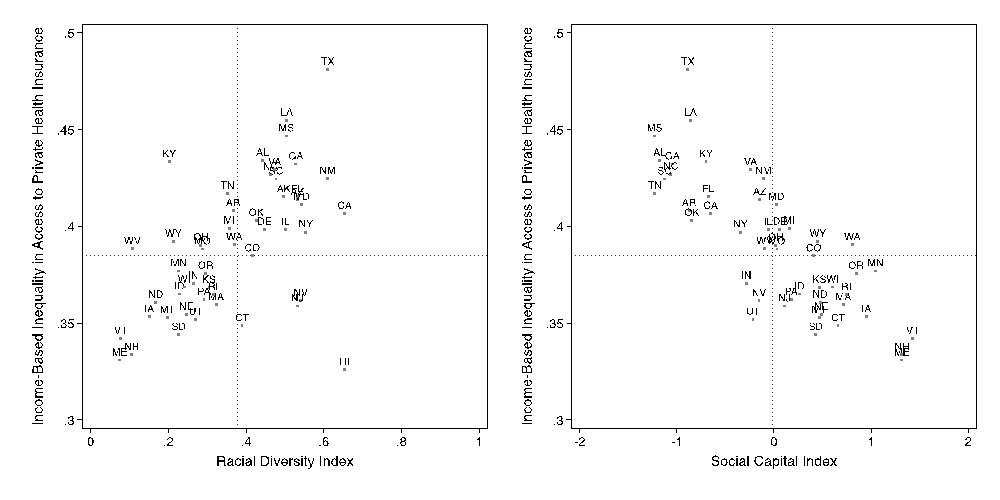 High and persisting levels of inequality in private health care coverage can be deemed as a form of market failure. My analysis suggests that employment-based healthcare insurance and the private insurance markets discriminate against individuals based on their income. Over the past two decades, inequality in health care has been persistent and some states have experienced steady increases in the unequal distribution of health care resources. The key to understanding how democracies attempt to address issues of inequality lies in a complex set of social and political factors. My research suggests both social capital and racial diversity are critical forces that affect health care inequality at the state level. Social capital has a direct and negative impact on inequality in health care.

As the American states continue to play a critical role in reforming and improving the health care system, it is imperative to strengthen the community foundation for promoting more equal health care access. Moreover, the story about how racial diversity might elevate inequality in health care highlights the importance of overcoming the racial gradient in the American society. Many states have experienced rapid demographic changes in the past ten years, particularly the growth of Latino and immigrant populations. As many states become racially more diverse, dealing with racial disparities in health care has become one of the most pressing tasks for making social equity policies which are effective.

Ling Zhu – University of Houston
Ling Zhu is an Assistant Professor of Political Science at the University of Houston. Her research interests include public management, health disparities, social equity in healthcare access, and the implementation of public health policies at the state and local level.