The US Senate now hosts more than 20 former state governors, a group which played an important role in ending the recent government shutdown. In new research, Alex Keena and Misty Knight-Finley examine the bipartisan role that former governors play in the US’ upper house. They find that former governors were 8 percent more likely to vote with the other side, compared to legislators who had not previously been in charge of a state.

Earlier this week, the US Senate passed a continuing resolution that provides short-term funding to the federal government, ending a three-day government shutdown and renewing negotiations over the legal fate of DREAMers—undocumented immigrants who were brought to the United States as children and were granted temporary legal protections by the Obama Administration. In breaking the impasse between Democrats and Republicans, one group of lawmakers played pivotal role: former governors serving in the Senate.

Since 2013, former state governors in the Senate have met regularly to hold informal bipartisan discussions on key issues. Today their ranks constitute an outsized share of the bipartisan group of Senators that calls itself the “Common Sense Coalition”, which has led the talks on extending the DACA program.

Our research suggests that former governors tend to be significantly less partisan than their colleagues in the Senate and that electing former state governors to the Senate may serve to ease legislative gridlock in Congress.

In new research, we analyzed legislative behavior in the Senate going back to the 1980s to understand how senators’ previous political experiences and career tracks affect their partisanship on the Senate floor. Using the Party Unity dataset, we studied the voting records for all senators who served between the 98th and 113th Senates (1983 – 2015) on contentious “party votes”, in which a majority of members from each party voted against the other party. We found that while most types of prior experience in elected office had no effect on a senator’s party voting record—for instance, former US House members appear to mirror the behavior of their Senate colleagues—senators with gubernatorial experience are distinctly less partisan in their voting patterns. Even after for accounting for a number of other explanations for this trend, such as a senator’s electoral security, the length of their tenure in office, and the political preferences of their statewide constituency, the experience of serving as a state governor decreases a senator’s Party Unity score by about 8 per cent. 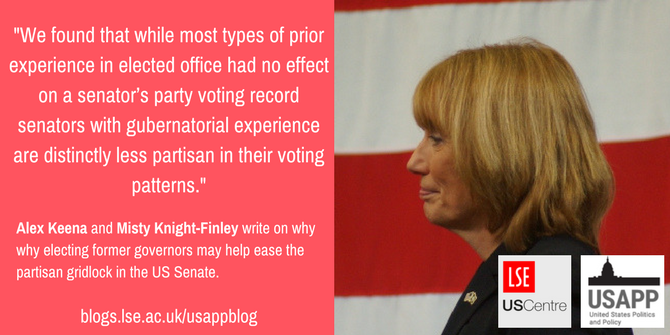 “NH Governor Maggie Hassan” by Marc Nozell is licensed under CC BY 2.0

Why are Governors less partisan?

We find evidence that the governor effect stems from both the unique sets of experiences that governors face in the statehouse, as well as the nature of their electoral coalitions. First, the experience of serving as a state governor has changed dramatically over the past 50 years. During the 1970s, many states restructured their governments, giving governors new budgeting responsibilities and expanding the size of the state bureaucracies under their control. Former governors, who tend to have experience in brokering bipartisan compromise, are likely comfortable acting unilaterally and bypassing party leadership once in the Senate. Our findings suggest that senators with longer tenures as chief executive tend to be less loyal to their parties; we find that each year of service as governor decreases a senator’s Party Unity score by about 1.3 per cent.

Second, the path to becoming governor is different than it was during the mid-20th century. The advent of mass media and modern campaigning mean today’s gubernatorial candidates are less reliant upon their state parties to win elections, and more reliant upon cultivating a personal reputation to win voters. Using the Database on Ideology, Money in Politics, and Elections, we studied senators’ donor networks to understand how former governors compare with their peers. We found that the financiers of former governors tend to be less ideologically extreme than other senators, including former “at-large” US House members who also served statewide constituencies before entering the Senate.

Misty Knight-Finley – Rowan University
Misty Knight-Finley is an Assistant Professor of Political Science in the College of Humanities & Social Sciences at Rowan University. Her primary research interest in comparative public policy intersects both American and Comparative politics. Her substantive policy interests include domestic human rights policy, social welfare policy, and social regulatory policy. She has additional research interests in political institutions and has done research on the US Congress.