More than twenty US states use competitive elections – some partisan, some not – to choose their judges. As with much of the rest of US politics, judicial candidates are often reliant on campaign contributions from businesses, ideological groups, and individuals. In new research, Brent Boyea finds that where states hold partisan elections and have professionalized courts, individual contributors are much more generous than those where they do not.

In the first year of President Donald Trump’s administration, twelve nominees to the United States Courts of Appeals were successfully confirmed by the US Senate. In terms of first year confirmations to the circuit courts, this total represents a record surpassing President Nixon by one.  Among the twelve confirmed nominees is Don Willett, a former justice of the Texas Supreme Court now serving in the 5th US Court of Appeals.  Though Judge Willet is well known for his informal position as “Tweeter Laureate” due to his prodigious use of social media to express views on a variety of subjects including religion, his family, first responders, and bacon, he is also an important figure for what his experiences tell us about the role of money in state court elections.  Judge Willett twice ran for the Texas Supreme Court (2006 and 2012) and raised more than $4 million in combined donations, including $2.3 million from individual donors. For Judge Willett and others seeking office in elective state Supreme Courts, money is essential for becoming a judge.

For many, including the American Bar Association and former US Supreme Court Justice Sandra Day O’Connor, judicial elections are simply unacceptable due to the burdens placed on candidates and concerns about bias in the application of justice.  In contrast, the and some political scientists feel that it is important that voters are able to express their views and hold state judges accountable.  Of the fifty states, all but seven use elections to either select or retain their high court judges. Elective methods take different forms with election formats that incorporate political parties, nonpartisan systems where political parties cannot officially participate, and retention elections where voters are asked whether to keep or not keep an incumbent judge.  Twenty-two states use competitive election formats (partisan or nonpartisan) where candidates seek contributions from donors.  In states with partisan and nonpartisan judicial elections, the costs of campaigns have risen steadily since the 1980s when a “new style” of judicial politics led to louder and more competitive elections.  The result was an influx of larger contributions from supportive law firms, businesses, ideological groups, and individuals.

Luckily for researchers the National Institute on Money in State Politics has collected data on contributions to state judicial elections since 2000.  To better understand how money matters in state Supreme Court elections, it is important to dig into the factors influencing contributors. To do so I explored the total contribution per donor in all partisan and nonpartisan general elections from 2000 through 2012.  To make donations comparable throughout the years of analysis, contributions were adjusted to constant dollars (2012) using the Consumer Price Index. So for each contributor that gave to a judicial campaign, the total sum of their contributions to a general election was tallied. A systematic evaluation of contributions to judicial elections

For citizens participating in down ballot judicial campaigns, partisan information and other features of elections are important influences on participation. To understand the conditions for judicial candidates (like Judge Willett in 2006 and 2012) to successfully raise money, I used multivariate analysis to fully consider the reasons that individuals give money. Consistent with Figure 2, I find contributors respond favorably to partisan information.  Yet, partisan information does not explain donor behavior by itself. Contribution amounts are also shaped by incumbent characteristics, the timing of elections, contribution limits, and a contributor’s employment as an attorney.  Further, contributors support candidates more actively in states with professionalized courts where judges have higher salaries, advanced resources, and courts have freedom to decide their agenda. 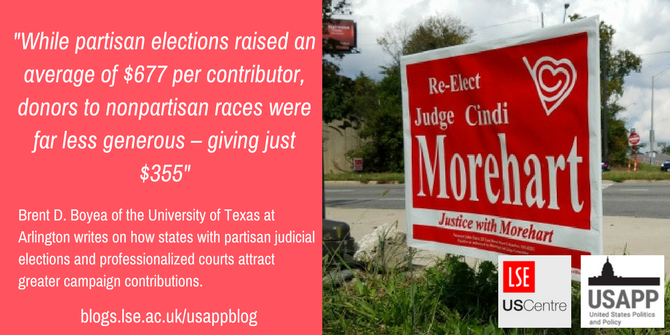 “Justice with Morehart” by Dan Keck is Public Domain. 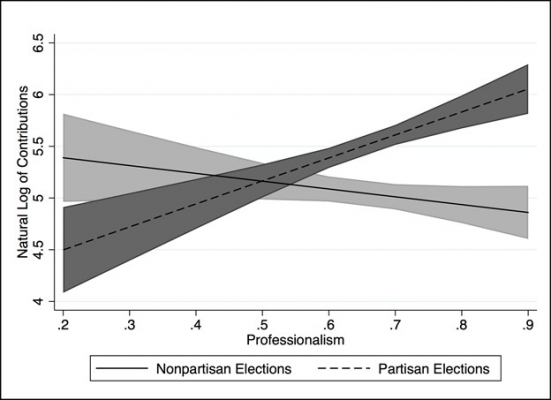 Evidence of linkage between partisan signals and contribution amount

Those who give are more generous where electoral information allows donors to distinguish the partisan characteristics of candidates.  Moreover, where states use partisan ballots, contributors are attentive to a court’s ability to shape state policy. In nonpartisan election states, candidates receive smaller donations due to reduced political engagement among contributors, which correlates with Melinda Gann Hall’s observation of a negative relationship between state court professionalization and voter participation.

For those concerned about bias and the role of money in judicial decision-making, improved citizen activity in partisan systems may lead to additional concerns.  State courts, for example, may become more polarized as judges seek financial support from opposing sides.  Additionally, research shows – albeit inconsistently – that judicial decisions are impacted by contributions.  Such questions lead to new avenues of research as we consider the subsequent effects of making contributions to state court campaigns.