The US Census Bureau recently announced that it will be changing the demographics it measures and how it counts people. Hannah L. Walker and Rebecca U. Thorpe argue that the Bureau’s revisions are an important opportunity to correct current practices of counting prisoners as residents where they are incarcerated rather than in their home communities. Such practices distort democratic representation and influence benefits and state aid.

The Census will continue counting prisoners where they are housed

Gearing up for the decennial census, the US Census Bureau is revisiting and revising how it measures various demographics, collects data and counts people. For example, the Bureau is making waves with a proposal to ask whites their ethnic origin, as well as with the announcement that they will not change how they measure Hispanic ancestry. How the Census determines how to count individuals has ramifications for politics, public decision making, and research across numerous areas of study. The opportunity to correct issues that arise from poor measurement come around only once a decade, and influences the balance of voting power, allocation of state and federal resources and base of knowledge for much longer.

Last week the Bureau released a memo detailing that they will measure individual place of residence based on where a person lives and sleeps most of the time. While this may sound straightforward, transient populations and individuals living in group quarters complicate the residence criteria. For example, although college students living where they go to school often retain their parents’ address as permanent, the Census counts them at their campus address. Likewise, more than 2 million people sentenced to prison or jail are counted where they are incarcerated rather than in their communities of origin.

In the lead-up to the decision the Bureau asked for public comment on the residence requirements. The Prison Policy Initiative, a non-profit criminal justice think tank, joined with voting rights, civil rights and criminal justice advocates and petitioned the Bureau to begin counting prisoners in their home communities. A summary of public comments released by the Department of Commerce indicates that over 95 percent (out of nearly 80,000 made) supported changing the rules to count imprisoned populations in their home communities instead of where they are housed.

Foremost, counting prisoners where they are housed fundamentally distorts democratic representation. Prisons are disproportionately located in sparsely populated, rural communities. Within those rural communities, prisoners often comprise a sizeable portion of the overall population. In over 20 counties in the United States, at least a fifth of the county’s population is incarcerated. In one parish in Louisiana, over 30 percent of the population is behind bars. 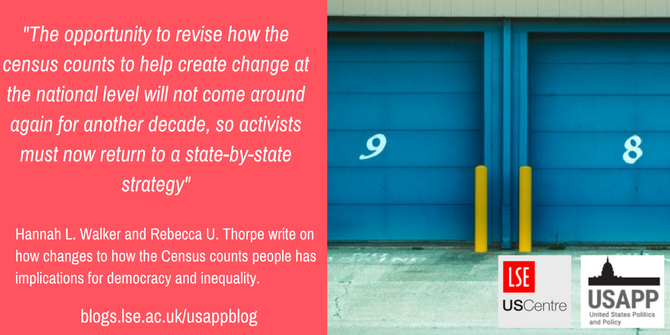 In a practice called prison gerrymandering, lawmakers take advantage of the geographic concentration of prisoners in rural counties—who by and large are barred from voting—to pad populations and create safe districts. In two US House districts in Texas, prisoners account for nearly 12 percent of the population. To quote a Prison Policy Initiative report, “Eighty-eight residents from that district, then, are represented in the State House as if they were 100 residents from urban Houston or Dallas.”

Moreover, the majority of prisoners come from urban centers, deflating the political power of their communities of origin. In Illinois, 60 percent of prisoners are from Chicago’s Cook County, but over 90 percent are counted as living elsewhere in the state. Like most other states, the prison population in Illinois is predominately Black, but most are housed in predominately white counties.

In addition to distorting representation, population counts are used to determine state spending on social welfare, public safety and substance abuse prevention programs, and federal block grant funding for programs like Medicare and Medicaid. Our study systematically examines the impact of counting prison populations on funding streams in three states. The results suggest that counties with an outsized institutionalized population accrue significant fiscal advantages. For example, in New York, rural counties with large prison populations received funding from the state at a 46 percent greater rate than rural counties without any prisoners. Crucially, this finding holds up after accounting for the amount of money that the county contributes to the state in revenue and excluding state expenditures for prison upkeep.

Counting prisoners where they are housed may also affect public funding decisions indirectly. Prisoner demographics influence a county’s economic and racial profile. If public budgets account for these factors to target anti-poverty efforts then prison populations will skew outcomes—and it will do so in ways that do not benefit the imprisoned populations themselves.

The political economy of rural prisons

In short, the decision by the Census to continue counting prisoners where they are incarcerated has serious implications for who is heard and material outcomes across communities. In fact, the Bureau ultimately altered how they count servicemen and women deployed overseas after advocates made similar arguments about military residency requirements. While this change was touted as a boon to hundreds of communities with military bases, the welfare of the prisoners, their families and home communities remain in jeopardy.

Moreover, the census practice further entrenches inequality and knits mass incarceration deeper into the fabric of American political life. While rural reliance on prison infrastructure reinforces political support for harsh sentencing laws, counting prisoners as residents also bolsters local voting power and fiscal benefits in rural prison towns at the expense of marginalized urban communities where most prisoners are from.

The opportunity to revise how the census counts to help create change at the national level will not come around again for another decade, so activists must now return to a state-by-state strategy. Fortunately, state and local governments have been receptive to change to varying degrees. Four states, including California, Delaware, Maryland and New York have passed legislation prohibiting prison gerrymandering by reallocating people in prison back to their home communities. Several other states, counties and localities have adjusted their population counts to exclude prisoners altogether for the purposes of redistricting. Even so, the decision by the Census not to alter their practices mean that activists must employ a cumbersome, patchwork strategy in order create more representative districts that no longer distort our democratic principles.

Rebecca U. Thorpe – University of Washington
Rebecca U. Thorpe is an Associate Professor at the University of Washington. Her research interests include political institutions and state development, with an emphasis on US military spending and warfare, criminal punishment, and imprisonment. She is the author of The American Warfare State: The Domestic Politics of Military Spending (University of Chicago 2014) and “Perverse Politics: The Persistence of Mass Incarceration in the 21st Century” (Perspectives on Politics, Sept. 2015).