When we hear the term ‘lobbying’ we tend to think mostly in terms of corporations and ideological groups working to influence policy outcomes at the state and federal level. But cities are often lobbyists too. In new research, Rebecca Goldstein and Hye Young You examine the causes and consequences of lobbying the federal government by American cities. They find that liberal cities in conservative states such as New Orleans, Tucson, and Houston were the most likely to lobby, a trend that they explain may be down to gaps between how much these cities and their states spend on public services and infrastructure.

Why do some cities lobby the federal government, and others do not? And does lobbying make a difference in terms of federal resource allocation? In recent research, we answer these questions, finding that liberal cities in conservative states are most likely to lobby the federal government, and that such lobbying is associated with a modest but significant in increase in federal support to the lobbying cities.

For our dataset on which cities lobby, we drew on federal lobbying disclosures submitted by cities with populations greater than 25,000 between 1999 and 2012. We find that 42 per cent of such cities submitted at least one lobbying disclosure. The cities most engaged in lobbying were not America’s largest cities, such as New York or Los Angeles. Instead, the cities engaged in the most lobbying included New Orleans, Tucson, and Houston — liberal cities in conservative states.

We find that the public goods gap matters to lobbying: a city’s propensity to lobby the federal government increases the larger the public goods gap between the city and the state. Demographic variables are also important determinants of a city’s lobbying activities: cities that are more ethnically diverse and unequal in income distribution are more likely to participate in federal lobbying. Their lobbying engagement may help to explain why more ethnically fragmented localities receive higher per capita transfers from higher levels of government, despite their difficulty in providing public goods at the local level. 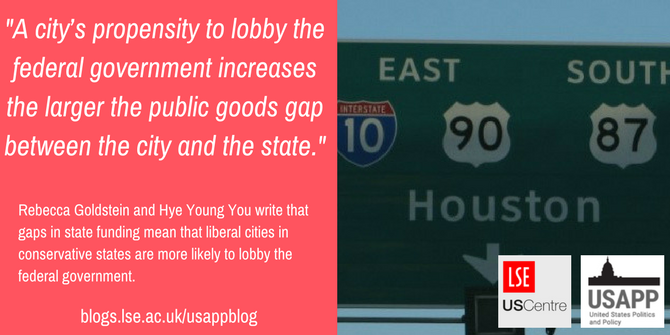 “Texas highway signs in Clearview font” by Oran Viriyincy is licensed under CC BY SA 2.0

Our findings make sense in light of the political and demographic differences between conservative states and liberal cities. Liberal cities will often be racially and economically diverse, and the city government will often wish to spend money (perhaps more than it can raise on its own) on improving local schools, building more affordable housing, and investing in public transit. In liberal states, the state government may well share these priorities and therefore be willing to support the city. In conservative states, the state government is less likely to support transfers to cities — given cities’ policy priorities and the differing demographics between a state’s cities and its non-urban areas.

Next, we turn to whether cities that lobby the federal government receive more federal funds than those that do not lobby. We use data on earmarks and Recovery Act grants awarded to cities, and exploit data on the existence of a direct flight from the relevant city to Washington, D.C., as an instrumental variable. Our regression results suggest that a 1 per cent increase in lobbying spending increases the amount of earmarks and Recovery Act grants by 1.02 per cent and 0.47 per cent, respectively.

Our analysis has been the first to focus on local government lobbying of the federal government, and its findings about the dynamics intergovernmental relations are relevant to scholars and policymakers alike. While our findings shed significant light on an important (and previously overlooked) aspect of intergovernmental relations, we hope they serve to begin a broader conversation. Do local lobbying strategies change when there are changes to which party is in power, at either the state or federal levels? Or is there stickiness in local lobbying? Unlike other interest groups, cities represent voters with differing preferences, and given that lobbying spending comes from local government budgets, whose interests are represented when cities lobby? If the returns to lobbying are so high, why do some cities not lobby at all? All these questions are worthy of study, and we hope our work opens up doors for others to examine intergovernmental lobbying further.

Rebecca Goldstein – Harvard University
Becca Goldstein is a fourth-year PhD student in the Harvard Department of Government. Her research focuses on the politics of criminal justice policy in the U.S, police behavior, program evaluation, and prisoner reentry. She graduated from Harvard College in 2013 with a B.A. in Statistics.