The Harvest Box will increase hunger for SNAP recipients. Here’s what Congress should consider instead.

The Harvest Box will increase hunger for SNAP recipients. Here’s what Congress should consider instead.

In February, the Trump administration proposed some major changes to the Supplemental Nutrition Assistance Program or SNAP. Under the proposal, at least half of recipients’ benefits would be replaced by a ‘Harvest Box’ containing shelf-stable staples rather than fresh produce. Katie Fitzpatrick argues that the plan would increase hunger and the stigma of receiving SNAP. Rather than going forward with the administration’s proposed reforms, she writes that Congress should strengthen the program by increasing benefits and improving access to healthy food.

The Supplemental Nutrition Assistance Program (SNAP) is the largest food assistance program in the US. Its goal is to reduce food insecurity and improve nutrition. In the 2017 fiscal year, SNAP delivered an average of $126 each month via an electronic benefit transfer (EBT) to more than 42 million people in nearly 21 million households. Research finds that SNAP reduces food insecurity, improves health in the short-run and long-run, and enhances economic well-being. The Trump administration’s 2019 budget proposal would undermine this important program by both changing how it distributes food and cutting its benefits.

In addition to providing a nutritional safety net, SNAP is one of the most important anti-poverty programs, especially for children who are present in 43 percent of SNAP households, and effectively responds to economic downturns. In the 2015 fiscal year, it lifted 10 percent of participating households out of poverty and 12 percent out of deep poverty. Because it is available to all types of households, the caseload is diverse. Eligibility requires only low-income and low-assets – generally 130 percent of the federal poverty line and $2,250 in financial assets – or the receipt of another anti-poverty program.

The administration’s budget proposal would fundamentally transform SNAP with its “America’s Harvest Box” idea, in addition to its 30 percent cut in the program – roughly $213 billion over the next 10 years – achieved by restricting eligibility and benefits. For the approximately 16 million (80 percent) SNAP households that receive at least $90 a month in benefits, the box would replace at least half of their monthly benefits. Contrary to the name, these boxes would not include fresh fruits and vegetables but pre-packaged food sourced from US producers, such as shelf-stable milk, peanut butter, canned meat, canned fruit, and cereal. According to Sonny Perdue, Secretary of Agriculture, the goal of the box is to innovate SNAP through the home delivery of staples that provide the same level of food value as benefits.

A reform which would increase hunger

Research suggests that the box plan would increase hunger, do little to improve dietary choices, and harm well-being. The box would increase the stigma of receiving SNAP, causing some to leave the program and others to never apply. This would undo decades of progress in reducing stigma by, for example, paying benefits electronically rather than with paper vouchers.

Even for SNAP participants, the box plan would reduce SNAP’s effectiveness in reducing hunger. Economics tells us the box will not have the same value to participants as SNAP dollars, suggesting that the box would decrease SNAP’s value. However, SNAP benefits are already inadequate for most families. Research and anecdotal information indicates that many SNAP recipients spend their SNAP benefits before the end of the month. Many combine SNAP with non-profit food assistance, such as food banks. The box would also likely create food waste because the contents may be inconsistent with recipient tastes, allergies, dietary restrictions, and cultural or religious preferences.

Additionally, delivery of shelf-stable food would not improve diets or, ultimately, reduce diet-related disease. The eating habits of most Americans are worse than recommendations and SNAP recipients are no different. Most recipients spend more on food than their benefit, suggesting SNAP is not changing how recipients buy food. Instead, recipients need help buying healthy foods, like fresh fruits and vegetables, which are often more expensive.

The box plan would increase administrative costs which are currently only 7 percent of SNAP spending. Shipping and delivery is more expensive than an electronic transfer onto a benefit card, especially in rural areas. Practical considerations crop up, as well. Some SNAP recipients are homeless and others are without stable housing; shipments may be late, stolen, or damaged during transit, while weather delays or natural disasters could prevent delivery. Any of these problems would mean the box harms recipients. 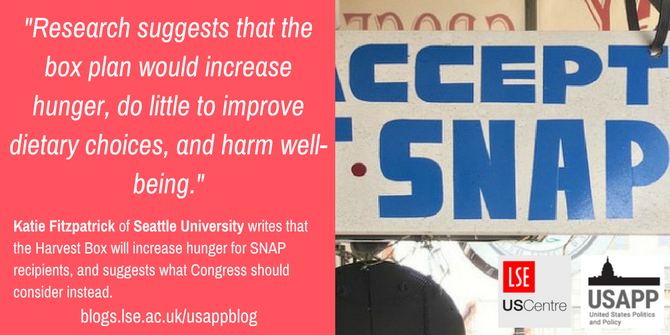 “WE∙ACCEPT∙EBT∙SNAP” by Nick Sherman is licensed under CC BY NC SA 2.0

To these objections, proponents point to other programs involving the bulk purchase and redistribution of food. The USDA, in collaboration with state agencies, distributes food to school districts participating in school meals. But, the largest direct-to-consumers program, budgeted at just $236 million, is the Commodity Supplemental Food Program (CSFP). Reaching 630,000 elderly individuals each month, the CSFP does not operate in all states and does not deliver food door-to-door. Neither the federal nor state governments currently have the infrastructure to serve the 42 million SNAP participants with delivery service.

Even if the box plan could scale, it would reduce SNAP’s effectiveness as a local economic stimulus. One source of SNAP’s efficiency is its reliance on private market grocers. Every $1 in SNAP benefits spent, generates $1.70 in economic activity. Thus, by reducing spending at grocery stores, the harvest box will reduce SNAP’s spillovers.

Looking beyond the Harvest Box

While the box plan has generated the most headlines, other proposed changes to SNAP are more likely to be enacted. Among Republicans, broad support exists to strengthen existing work requirements and further limit benefits for non-working childless households. Currently, to receive SNAP for more than three months in any three year period, childless adults must work. But, recipients that are not elderly, disabled, or in school do tend to work: almost one-quarter of SNAP households contain a full-year worker, 44 percent of SNAP households had earnings, and one-third of participants had a job. For unemployed participants, low-skill levels may make it hard to find and maintain a job, especially when unemployment is high.

Critics of SNAP worry about its growth over the past two decades. Between FY2000 and FY2017, SNAP caseloads grew 145 percent and spending on benefits grew 325 percent. Some of this growth was caused by changes in the economy, including the Great Recession. Growth peaked in FY2013, and with the improving economy, caseloads are declining and predicted to continue to decline.

Not all of the caseload growth over this period is due to the economy. Over this same period, states received new flexibility in determining program rules. With federal approval, many states adopted rules that should increase participation by, for example, simplifying the application process, relaxing eligibility criteria, and emphasizing outreach to eligible non-participants. While some state policies should decrease participation, such as fingerprinting new applicants, on net, my co-authors and I estimate that state-level rules explain approximately one-fourth of the caseload increase since 2000. These changes have ensured that needy households receive help meeting their food needs.

The upcoming reauthorization of the Farm Bill is an opportunity to strengthen this vital program. Congress should consider the following:

Katie Fitzpatrick – Seattle University
Katie Fitzpatrick is an Associate Professor of Economics at Seattle University. Her current work focuses on the effectiveness of the Supplemental Nutrition Assistance Program (SNAP), formerly the food stamp program; the causes and consequences of food insecurity; and, the use of mainstream and alternative financial institutions.