This month, Mississippi’s long-serving senior US Senator, Thad Cochran, announced that he would be retiring in April. Rolda Darlington writes that Cochran’s resignation throws up a host of new challenges for the Republican Party, which is already on the back foot in the lead up to the 2018 midterm elections. With both of the Magnolia State’s US Senate seats now in play in the fall, she writes, the Republican Party’s ambitions to retain control of the Senate look increasingly shaky.

On March 5, 2018, Senator Thad Cochran of Mississippi announced that he would retire on April 1st of this year. His choice to end his tenure as one of Mississippi’s two Republican Senators has already created confusion and angst for the GOP, who are concerned about this year’s Congressional midterm races. There is no doubt that the Republican Party still feels the sting from their electoral upset last December when Democrat Doug Jones defeated embattled Senator Roy Moore in a special election to fill the seat previously held by the now Attorney General Jeff Sessions. With the planned retirement of Thad Cochran, the GOP must now deal with another series of uncertainties concerning candidate choice, increased Democrat voter turnout for special elections, and an unpredictable wind that may not favor the Republicans when time to hold another special election to fill Cochran’s seat arrives this November.

Thad Cochran was first elected to the US Senate in 1978, becoming the first Republican elected state-wide in Mississippi in over 100 years. The octogenarian is now the 3rd longest still-serving member of the Senate, only slightly behind Senators Patrick J. Leahy (D-VT) and Orrin Hatch (R-UT). Cochran currently holds the highly coveted chairmanship of the Senate Appropriations Committee, a position of seniority which will go to Senator Richard Shelby of Alabama upon Cochran’s retirement. When Cochran steps down, Mississippi Governor, Phil Bryant, a Republican, will have ten days to appoint an interim senator. A special election will then be held on Election Day in November to fill the rest of Cochran’s term which ends in 2020.

It has not been long since Cochran fought to keep his seat as the senior Senator for Mississippi, when in 2014, he was nearly unseated by State Senator Chris McDaniel. McDaniel will appear again in the Senate races coming up in November, even though the Republican Party is not quite sure how he plans to carry out his electoral ambitions. The junior Senator from Mississippi, Roger Wicker, is facing reelection this November, and has drawn a primary challenge from none other than McDaniel. Cochran, anticipating McDaniel would make a bid for his seat if he were to resign, held the announcement that he intended to retire before the end of his term until McDaniel was forced to announce his bid for Wicker’s seat. Since Cochran’s announcement, however, McDaniel has yet to let it be known whether he will continue to vie for Wicker’s seat or switch races to compete for Cochran’s open seat in a special election. The uncertainty created by a McDaniel with wandering electoral eyes, along with an unclear path concerning which candidate to run in the unavoidable special election in November, makes Cochran’s untimely and unexpected retirement just another hassle in the GOP’s bid to hold on to the majority in the US Senate in 2018.

Arguably, McDaniel’s ultimate decision is the least of the Republican Party’s worries for the upcoming mid-term elections. On the heels of elections across the country where previous Republican strong-holds have flipped in favor of the Democrat in the race, The GOP has to be more concerned with the increase in voters turning out for Democratic candidates in mid-term and special elections. The special Senate election in Alabama late last year was just one of a series of surprising election outcomes favoring the Democratic Party. In New Jersey and Virginia, for example, the Democrats won governors races and a number of key state legislative elections. Most recently, voters and viewers stayed up and watched as a Democrat won the special election in Pennsylvania’s 18th District, where voters chose President Donald Trump by twenty percentage points in 2016. The day after the upset in the Alabama special election, the chairman of the Democratic Senatorial Campaign Committee (DSCC), Chris Van Hollen (D-MD), pledged to have a Democrat in every race in this year’s midterm elections. Mississippi remained one of the last gaps for Democrats in that pledge. In late February, however, Democrat David Baria entered the Senate race against whoever emerges from the battle between Wicker and McDaniel. Baria, the Mississippi state house minority leader, entered the race the day after McDaniel declared a primary challenge against Wicker, stating that he wanted to give the voters a true choice. What Baria may not have realized is that Senator Thad Cochran would eventually announce an early retirement, due to significant health concerns, leaving him to go up against Wicker in the November general election. 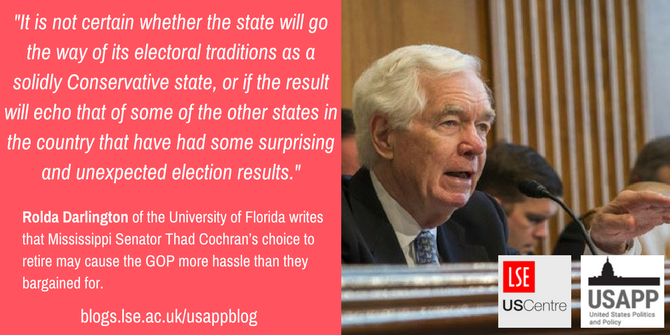 Voter turnout for the party that does not hold the White House typically spikes in the first congressional election after a new president takes office. This trend is expected to continue for the upcoming midterm elections. The expected uptick in voter turnout among Democrats, coupled with actual voter surges among Democrats already seen in primary elections in Texas, where Democrats saw their biggest midterm turnout in more than a quarter-century, seem to project a difficult midterm season for the Republicans.

Some Democratic voters simply fail to turn out for midterm and special elections, but we are seeing some shifts in this regard across the country. Therefore, it has been noted with some surprise, that voter turnout is cited as the moving variable in many of the recent races where Republicans are losing seats to Democrats, not necessarily any sort of depressed sentiment toward the sitting President. This trend does not portend well for the Republican Party in light of Cochran’s retirement plans, and to be sure, the uncertainty for the GOP’s ambitions to retain the Senate do not end there.

Mississippi has an enduring reputation as one of the most conservative states in the nation. In fact, a Democrat hasn’t won one of its two Senate seats since 1982. Beyond its electoral character, Mississippi maintains a notable reputation for conservative legislation in their state house. In recent weeks, the Mississippi state legislature finalized and passed what is referred to as the country’s most restrictive abortion laws. The bill is now awaiting the governor’s signature.

What will the voters of Mississippi do when they go to the polls to vote for two Senators in November? It is not certain whether the state will go the way of its electoral traditions as a solidly Conservative state, or if the result will echo that of some of the other states in the country that have had some surprising and unexpected election results. Electoral winds are blowing in directions that make it difficult to determine just which way a special election for Senator will end. Perhaps Thad Cochran could not have avoided throwing his retirement on to the pile of uncertainty the GOP is bound to face come this November, but his timing leaves a lot to be desired.