Congressional special elections have achieved a newfound importance, with commentators looking to their results as a potential predictor of how the Republican Party might fare in this year’s midterms. Gina Woodall warns that we should not consider the upcoming special election for Arizona’s 8th Congressional District to be a bellwether contest as some others may have been. While the Democratic candidate, Dr. Hiral Tipirneni , is a solid competitor for Republican Debbie Lesko, the district’s heavy Republican lean will likely present too great an obstacle for her to turn it blue.

Arizona’s eighth congressional district is vacant.  It will hold a special election on April 24th, to fill the seat formerly held by Rep. Trent Franks (R).  This is the first race since the election of President Donald Trump, where two women, former state Sen. Debbie Lesko (R) and Dr. Hiral Tipirneni (D) are running, although both candidates could not be any more different.

The seat was formerly held by Rep. Trent Franks (R) who resigned in December 2017 in the wake of the #metoo movement.  He allegedly asked female staffers to carry his child via surrogacy. Then, the front-runner in the Republican primary, Steven Montenegro, quit the race days before the primary, after being caught up in a “sexting” scandal with a junior staffer.

Arizona congressional district (CD) 8 is a very safe Republican district.  Sun City, the “original” retirement community with about 38,000 residents according to the 2010 census, regularly votes and 41 percent of all voters are Republican.  The district is 74 percent White with a Cook Partisan Voting Index of R+13.  President Trump won the district by 21 percent in 2016.  According to the Secretary of State’s office, Republicans have a 17 point advantage in voter registration. Examining the election data and demographics of the district alone would suggest that the Republican congressional candidate for CD 8 has this race “in the bag.” However, as the world witnessed in the 2016 Presidential election, is this enough information to predict an automatic win from the Republican candidate? Let’s examine the candidates.

Former state Senator Debbie Lesko (R) won the special primary election on February 27th, by about 12 percentage points.  Following her GOP primary win, Senator Lesko resigned her position as a state senator, which she held for 3 years.  Prior to that, she was a state representative for 6 years.  Lesko had been very active in Republican politics in the Phoenix area for several years before holding public office.  Some of her positions included serving as a Republican chairwoman for her legislative district and serving as the first Vice President for the Arrowhead Republican Women Club.   While in the state legislature, she championed legislation that included allowing people who drive golf carts to drive them along the side of the road.  This was important legislation in her district, which included Sun City.   She also presents herself as a “pro-life” and “pro-family” candidate, who consistently receives endorsements from national and local “pro-life” groups.

The Democratic candidate is Dr. Hiral Tipirneni, a former ER physician and current cancer research advocate.  Dr. Tipirneni won the Democratic primary by 19 percentage points.  Dr. Tipirneni is a first-generation immigrant, whose parents emigrated to the U.S. from India when Tipirneni was a small child.   Given her background in the medical field, Tipirneni presents herself as uniquely qualified to tackle the issue of affordable healthcare.   Negotiations, compromises, and creativity are actions she has been engaged in for years, as a physician, in service as a board member of the Maricopa Health Foundation, and as a health advocate for family members.  While Tipirneni has volunteered for political campaigns before, this is her first time running as a political candidate. 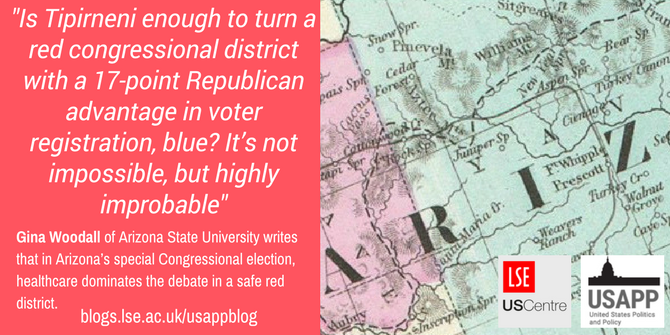 Healthcare and education are the main issues

On the issues, the candidates have striking differences.  Immigration is a critical issue, not only nationally, but especially in Arizona.  Lesko supports a secure border and looks forward to working with President Trump to protect the citizens of Arizona.  Her three prong “Border Security” plan includes: “Good fences make for good neighbors,” touting a physical wall on the border where appropriate; “It’s a people problem,” where she expresses her discontent with the poorly patrolled borders and states that an increase in personnel is critical to our security, and finally; “It’s a privilege to be here,” where she is against any type of chain migration and states that “people should only be admitted to this country based on its [sic] merits.” Tipirneni, on the other hand, calls for a solution for DACA, including a path for citizenship, as well as comprehensive immigration reform.  She is opposed to President Trump’s physical wall as the only solution to solving the immigration problem.  According to Tipirneni, “innovative technology” should be used to improve our borders.

On healthcare, another critical issue nationally and especially in CD 8, with Sun City within its borders, the candidates have different ideas.  Lesko wants to protect Medicare, Medicaid, and Social Security for people who are currently enrolled, but, for those who will be enrolled in the future, changes need to occur.  Healthcare reform is not an issue she highlights on her website.    For Tipirneni, reforming healthcare is critical.  She believes in universal coverage for all, which includes stabilizing the current Affordable Care Act, and expanding Medicare to those under 65.  Furthermore, she plans to help expand Medicaid to additional Arizonans so that there are more options for constituents. In a recent debate between the two candidates, Tipirneni was sure to point out that what she is advocating is “not socialized medicine,” but instead very much plays into “capitalism” by allowing public insurance to compete in the marketplace with private insurance carriers.

In terms of education, which is an extremely important issue right now in Arizona, where teachers are on a verge of a strike following states in West Virginia and Oklahoma, the candidates have highlighted their differences.  In 2012, while in the state House as Majority Whip, Lesko did not support making a one-cent sales tax permanent (Prop 204), a proposition where voters can vote directly on funds earmarked specifically for educational programs, public transportation infrastructure projects and human services programs.   Ultimately, the public didn’t support the proposition either.   Lesko is also an ardent supporter of “school choice” which allows individuals and corporations who donate to non-profit school-tuition organizations get a dollar-for-dollar credit on their state taxes.  These organizations then give scholarships for students to attend private schools.   This policy is perfectly legal in Arizona although it has come under intense scrutiny the last several years as certain state legislators have personally profited from the non-profits and because these “Empowerment” scholarships were initially intended to be for special-needs students, but now will be available to any student who wants to use it, pending a veto referendum in November.  Tipirneni, on the other hand, fully supports properly funding public schools and highlighting the importance of not only higher education,  but also trade schools.  Reducing student loan debt is another priority of Tipirneni’s.

Both Lesko and Tipirneni have clashed in debates on local TV political shows, and the candidates again highlighted their stark differences.  Lesko used buzzwords that would appeal to the conservative district such as “no new taxes,” “no socialized medicine” and “we need a wall” rhetoric.  She painted Dr. Tipirneni as an out-of-touch, “San-Francisco-type” candidate who does not understand nor represent the constituents of CD 8.  Dr. Tipirneni, on the other hand, laid out her alternative policy plans and reiterated that her skills as a physician will help her work with colleagues in Congress to get things done.  She corrected Lesko when Lesko referred to her health care policy as “socialized medicine” and reminded the viewers that she is a physician who understands the healthcare process.   She also made sure to highlight that she too thinks immigration reform must happen (like Lesko), but not on the backs of DREAMers.  Tipirneni also brought up a FEC complaint filed against Lesko and alleged that she mishandled state campaign funding and a third party group funneled over 50,000 from the state fund to her federal fund for office.  Lesko denies any impropriety and assured viewers that everything done in regards to her campaign finances is perfectly legal.  Lesko also acknowledged that she accepts corporate donations to her campaign, including from the Koch brothers, and she sees nothing wrong with that.  Tipirneni, in contrast, pledged not to accept corporate donations.

Overall, both candidates have their advantages.  Lesko is a tried and true conservative who supports President Trump’s policy, while criticizing his personal behavior.  However, she changed her mind when pressed about her criticism of the President in a New York Times interview.  Tipirneni is a solid challenger.  She’s highly educated, passionate, well-spoken, and ambitious.  She wants to lead, compromise, and work in a bipartisan manner to help the constituents of CD 8.  She says she fed up with partisan bickering and feels compelled to run as a solid alternative.  But is Tipirneni enough to turn a red congressional district with a 17-point Republican advantage in voter registration, blue? It’s not impossible, but highly improbable.

Gina Woodall – Arizona State University
Gina Woodall has been a lecturer in the School of Politics and Global Studies at Arizona State University since July 2007. Dr. Woodall’s teaching interests include research methods, American Government, statistics, and women in politics. Her primary research interests are social media in the political science classroom and gender, the media, and negative campaigns. She has co-authored several book chapters and journal articles with colleagues.