Abusive leaders cause suffering not only for their employees, but also for themselves, writes Trevor Foulk.

Lord Acton’s quote that “power corrupts, and absolute power corrupts absolutely” probably conforms to most of our experiences with powerful people. People who feel powerful tend to be self-focused, less empathetic, a little more rude or pushy, and just generally difficult to deal with. While most people generally understand that power makes others more difficult to deal with, one thing that’s not clear is how does feeling powerful affect power holders themselves?

In a recent study we set out to better understand this question. We conducted a field experiment that included 108 managers and leaders that worked in a variety of industries and organisations. The study took place over the course of 10 workdays. On half of those days participants took part in a manipulation that was designed to make them feel powerful. On the other days, they took part in a control manipulation (i.e., one that was not designed to make them feel powerful). We then compared the way participants interacted with others – including both how they treated others as well as how they felt others were treating them – and their own wellbeing on power days vs. control days.

This design allowed us to study the effects of feeling powerful in a unique way, because participants were in their actual work settings interacting with their co-workers during the experiment.

In other words, on power days employees’ sense of power caused them to think others should have made more efforts to try to please them, and when others didn’t do this the powerful employee interpreted it as incivility. Taken together, these findings suggest that feeling powerful causes employees to have more negative interactions with others at work – both in terms of how they treat others, as well as how they feel they are being treated by others.

We also explored participants’ well-being at the end of the day, manifested as need satisfaction and relaxation. We found that at the end of power days, because of the negative interactions that they had with their co-workers, participants’ own wellbeing suffered.

This finding is interesting for a few reasons. First, it changes the way we think about power in organisations. We almost always think of power as a “good” thing – we all want power, and we tend to assume that things will be better when we have power. These findings, however, challenge this assumption by demonstrating that because power taints the way we interact with others, it may not be as universally “good” as we previously believed. Second, this finding changes the way we think about victims of abusive behaviours. We all know that when a leader abuses a subordinate, the subordinate suffers. But these findings suggest that in addition to the subordinate suffering, the abusive leader also suffers. 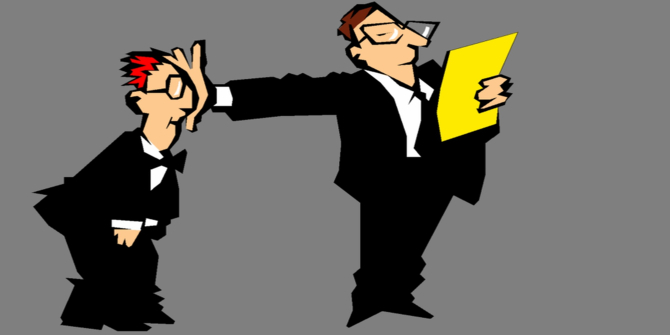 Finally, we found that the negative effects of power were not the same for all employees. Rather, employees high on the personality trait of agreeableness – a trait that indicates an employee values getting along with others – were not as likely to engage in abusive behaviour when they felt powerful. This finding is interesting in that it challenges the “universal” nature of Lord Acton’s prediction. In other words, our findings suggest that power does indeed corrupt, but maybe not universally. Instead, some employees may be less subject to the corrupting effects of power than others.

Taken together, our findings shed new light on the effects of feeling powerful in the workplace. First, they demonstrate that power harms the way we interact with others, not only causing us to treat others poorly, but also by making us feel that others are treating us poorly. Second, we show that these effects are not without consequence for the powerful employee. Instead, there is something of a “hangover” associated with feeling powerful – at the end of the day, employees suffer reduced well-being because of their own power-induced negative behaviours. Finally, we show that not all employees are equally subject to power’s corrupting effects, but rather that agreeable employees may be able to withstand the tendency of feeling powerful to inspire abusive behaviour.

Bottom line: next time you have a bad interaction with a powerful person at work, remember, their bad behaviour is causing them to suffer, too.