The public’s levels of trust and confidence in Congress have been at rock bottom for the best part of a decade, something which may be related to the perception that lawmakers do very little whilst they are in Washington DC. But can the threat of a competitive election or a primary challenge spur a lawmaker to be more productive? Analyzing legislative effectiveness and electoral pressure, Michael J. Barber and Soren J. Schmidt find that while the safer a legislator is from a primary challenger, the more effective they are, general election challenges result in an effectiveness ‘sweet spot’. After this point, legislating becomes less effective as lawmakers need to switch resources away from lawmaking and towards campaigning.

If we use the number of bills passed as our measure, the most recent congressional sessions have been the least productive of any during the past sixty years. Among members of Congress, however, individual levels of productivity vary widely; some legislators are far more effective than others at shepherding their bills through the legislative process.

At the same time, during the past few decades, congressional districts have become increasingly uncompetitive, with one party consistently dominating. But even lopsided districts don’t always mean the incumbent is safe—just ask former House Majority Leader Eric Cantor who lost his Virginia seat to a primary challenge in 2014. A primary challenger can be just as dangerous as a general election opponent, and even more so in districts which are dominated by one party.

The desire to win reelection—the electoral connection—is perhaps the single most powerful animator of legislator behavior. So, how exactly do legislators respond when their feet are put to the electoral fire? And are their responses different when facing competition from their own party rather than the opposing one?

These are the questions that we take up in our recent research. While electoral competition and legislator productivity have previously been studied in great detail separately, our research is the first to explore the relationship between the two taking into account both general and primary elections.

To answer those questions, we combine district election returns with Legislative Effectiveness Scores, the latter comprising both the quantity and progress of bills produced by legislators, for each member of the US House of Representatives from 1979 to 2009. After controlling for other known drivers of individual effectiveness (for example, seniority, committee membership, and gender we then measure the predicted level of productivity for legislators at each level of competition.

As Figure 1 shows, as we might expect, legislators do in fact adjust their bill production in response to electoral pressure. The adjustment is significant, about the same magnitude as is associated with a couple extra terms of seniority, and about 20 percent the size of the large boost given by being in the majority party. If all members of Congress experienced a one standard deviation change in vote share, our models predict that the aggregate number of bills passed into law would fluctuate by about ten in response. However, the pattern of that response is markedly different for general and primary election competition in ways that may not be immediately intuitive. 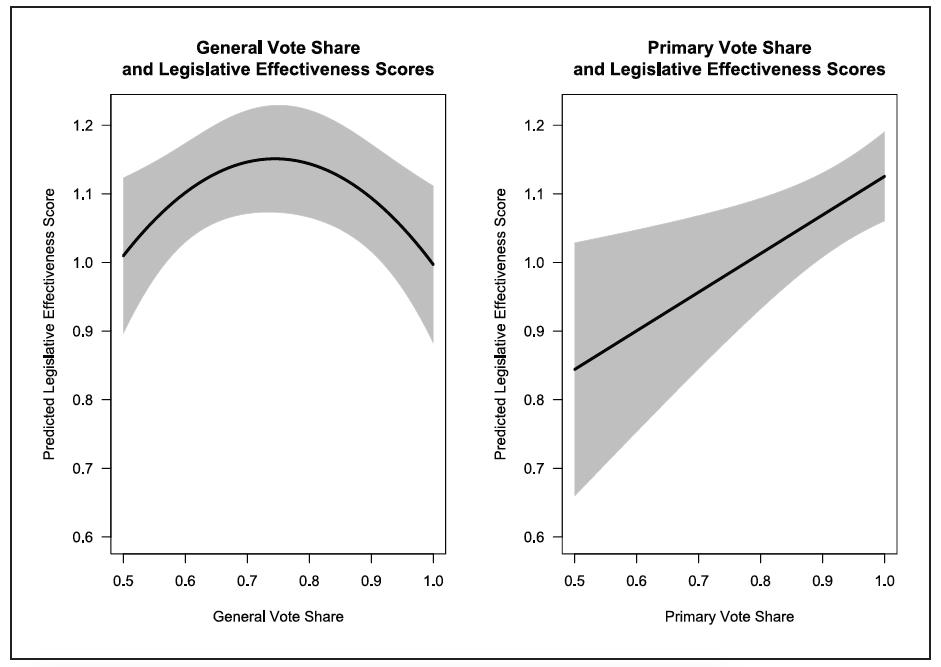 In general elections, we observe a quadratic relationship between competition and productivity, with the latter peaking when the legislator received about 75 percent of the vote share in the previous election. While our results don’t reveal the precise causal relationship at play here, in our view they do suggest what we might call an electoral “sweet spot.” We know that members of Congress facing grave threats in the general election often turn to fundraising, campaigning, and providing constituent services in an effort to win popular support. On the other hand, legislators that are (virtually) unopposed have little motivation to do extra vote-winning of any kind, including by producing legislation. Consequently, we observe a “sweet spot” where there is enough electoral pressure to spur bill production, but not so much that members of Congress feel they must abandon legislating to focus on campaigning.

With primary election competition, it’s a different story. The relationship with productivity is linear, not quadratic: the safer the legislator, the more effective she is. What accounts for the difference? Again, our results can’t answer that question with any certainty, but we do have some clues. For example, serious primary challengers are much rarer than strong general election opponents; the vast majority of legislators, especially incumbents, run virtually unopposed. When primary pressure does mount in any kind of serious way, then, legislators may be more reactive in switching to activities other than producing legislation (campaigning, etc). 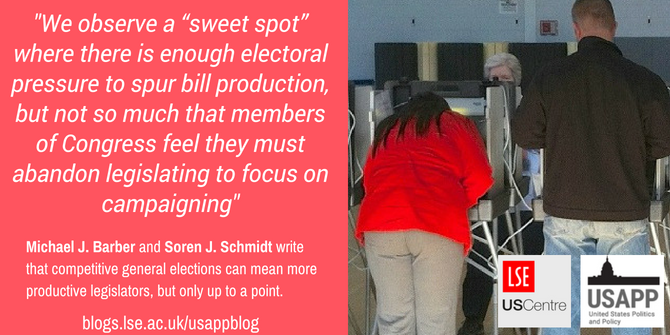 “Reading the ballot” by Dan Kennedy is licensed under CC BY NC SA 2.0

There’s one final wrinkle worth consideration. How might general and primary election competition interact with one another in influencing legislator productivity? The preferences of the constituencies that vote in each are often in tension with one another, and legislators may struggle to appease them both. To explore that question, we subsetted our models across one election stage’s vote share while estimating the effects of the other.

The basic takeaway from our models is this: at least when it comes to productivity legislators are only responsive to competition in one stage when they are safe in the other. What could be driving this interactive effect? It could be as simple as limited assets: legislators simply may not have the time or policy and campaign resources to respond to more than one close election at a time. Moreover, given the disparate demands of voters at the primary and general stage, it may simply be impossible for a legislator to respond to both simultaneously; she is forced to focus her decisions (at least in terms of allocating resources to bill production) on one of those elections and set aside the other.

Taken together, these results shed new light on the relationship between elections—both general and primary—and legislators’ choices while in office. This relationship is crucial to our understanding of democratic accountability, especially in an era of growing political polarization. Much scholarship has studied the institutional effects of polarization on collective outcomes in Congress, but more work is needed to understand how current trends play out at the level of individual legislators. We hope our work opens the door to such future research.