The Trump Administration’s policy of separating and detaining the children of immigrant families who are crossing the US border to claim asylum has drawn condemnation both at home and internationally. Rachel E. Rosenbloom writes that the practice – at a time when attempted border crossings are at a historic low – is an alarming extension of long-established policies to criminalize and lock up those who attempt to enter the US.

Reports of US government officials ripping children from their parents’ arms and warehousing them in cages have captured the world’s attention.  Over the past six weeks, the Trump Administration has taken two thousand immigrant children into government custody at the border, while imprisoning or detaining their parents. Every day, new stories emerge: of parents being told that their child is being taken away for a bath, only to find out later that the child has been taken to a separate facility; of staff at a children’s facility being told to forbid traumatized siblings from hugging one another; of a teenage girl teaching the other children in her cage to change the diapers of a very young girl who is so traumatized that she cannot speak. The UN High Commissioner for Human Rights, Zeid Ra’ad Al Hussein, has called the policy “unconscionable.”  The President of the American College of Pediatrics has called it “government-sanctioned child abuse.”

Separating families at the border is an escalation to a previously unthinkable extreme of two trends that began long before Donald Trump entered the White House.  The first of these is the increased use of criminal penalties against those whose only offense is crossing a border. The second is the expanded use of immigration detention.

Criminal penalties for improper entry into the US and for reentry following removal have been on the books for decades but were used only occasionally until the 1990s. Since then, such prosecutions have risen exponentially – in the case of improper entry, from less than one thousand prosecutions per year in the early 1990s to over fifty-four thousand by 2008. The original “zero tolerance” policy at the border was Operation Streamline, launched in 2005 during the George W. Bush Administration; under this program, federal courts began processing border-crossers in mass hearings of over eighty defendants at a time. Well before Trump entered office, immigration offenses had already come to account for more federal prosecutions every year than all other federal crimes combined.  The Trump Administration’s shift has been to implement a zero tolerance policy not just for reentry but even for first-time improper entry (a misdemeanor charge that carries a maximum sentence of six months), with no exceptions for parents, asylum-seekers, or any others.

Prosecuting parents is not the only way that the government is currently separating families; even those who present themselves at official ports of entry and state their desire to seek asylum are in some cases being separated from their children and detained. The detention of asylum-seekers dates back to the early 1980s, when the Reagan Administration began locking up Haitians fleeing the brutal regime of Jean-Claude “Baby Doc” Duvalier.  A few years later, immigrants’ rights groups brought a class action lawsuit challenging the government’s policy of detaining unaccompanied minors along the US-Mexico border.  That case, which dragged on for many years and eventually became known as Flores v. Reno, resulted in a 1997 legal settlement obligating the government to treat “all minors in its custody with dignity, respect and special concern for their particular vulnerability as minors” and requiring that children who remain in federal custody be placed in the “least restrictive setting appropriate to the minor’s age and special needs.”  In 2014, when the Obama Administration began detaining Central American mothers and children at family detention centers – part of a broad-based effort by the Obama Administration to deter Central Americans from making the journey to the United States – advocacy groups accused the government of violating the Flores settlement.  The government contended that Flores applied only to unaccompanied minors, but US District Judge Dolly Gee disagreed, ruling that Flores protects all immigrant children, with or without their parents. 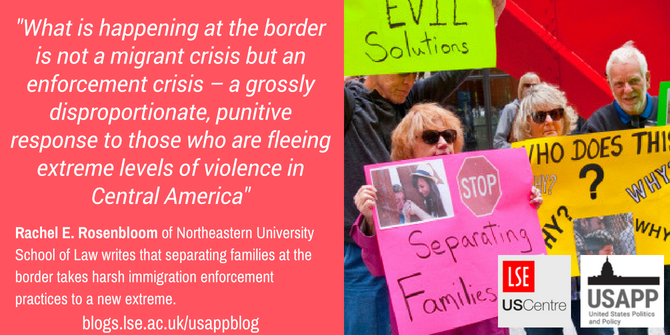 Ironically, the Trump Administration has cited Judge Gee’s decision as justification for separating families. The Administration’s perverse logic is that if the government is not permitted to detain parents and children together, it is instead compelled to detain the parents alone (or imprison them on a criminal charge) and to reclassify the children as unaccompanied minors. (It is this reclassification that places the children in the custody of the Office of Refugee Resettlement, which is running those facilities filled with cages.)  But as numerous commentators have pointed out, it is ludicrous to claim that Judge Gee’s decision or anything else compels a policy of family separation; the Trump Administration could release parents and children on bond while they are awaiting their removal hearings, as has been done previously. The American Civil Liberties Union has filed suit to challenge the practice of separating families, and a federal court will soon rule on whether to grant a preliminary injunction.  However, at least some aspects of the Trump policy, such as the decision of the Department of Justice to prosecute parents for improper entry, may well be beyond the reach of litigation.

The trauma that family separations inflict on both parents and children is severe, and even a brief separation may have lifelong consequences for a child.  It is thus entirely appropriate that public attention at the moment is focused single-mindedly on ending this policy and reuniting the families that have already been pulled apart. If and when those goals are realized, however, the crisis at the border will not be over.  The prosecution of asylum-seekers violates US treaty obligations under the Protocol Relating to the Status of Refugees, whether or not those being prosecuted are accompanied by a child.  And the continuing expansion of immigration detention represents a shameful example of the lingering exceptionalism that colors the Supreme Court’s immigration jurisprudence; in other contexts, the Court has consistently imposed strict limits on the government’s authority to detain people who have not been convicted of a crime.

Perhaps there is one positive development to come out of this harrowing chapter we are living through: people have finally stopped referring to the crisis on the border as a “migrant crisis,” a term that emerged during the initial increase in Central American asylum-seekers in 2014.  That term has always been a misnomer: apprehensions at the border are at historically low levels, less than one fourth of what they were at their height two decades ago. What is happening at the border is not a migrant crisis but an enforcement crisis – a grossly disproportionate, punitive response to those who are fleeing extreme levels of violence in Central America. While immigrant rights advocates have been making this argument for years, the Trump Administration’s new policy of separating children from their parents may have finally brought this point home to the broader public.

Rachel E. Rosenbloom – Northeastern University School of Law
Rachel E. Rosenbloom is Professor of Law at Northeastern University School of Law and co-director of Northeastern’s Immigrant Justice Clinic. She teaches courses on immigration law, refugee and asylum law, and administrative law. Her recent scholarship has focused on the intersection of criminal law and immigration law, the possibilities and limits of transnational legal advocacy in advancing the rights of deportees, and the role of race and immigration enforcement in the construction of U.S. citizenship.