Donald Trump is one of the least popular presidents in recent history – and yet his approval ratings among Republicans remain high. Christopher D. Raymond looks at President Trump’s popularity among the GOP, even as he introduces policies, such as the separation of immigrant children from their families, which many Americans oppose. He writes that up until now Republicans have been reluctant to abandon their party because of Trump, something that seems likely to continue.

The past month has seen yet another in a series of major controversies for President Trump, with his border detention policy requiring that children are separated from the parents of migrants crossing the US border illegally drawing widespread condemnation.  This has resulted in fresh claims that Trump’s presidency has hit a new low.  Not only has this policy received condemnation from a host of progressive groups, but many religious groups (including some supportive of President Trump) have been active critics.

This issue has led pundits to ask, yet again, whether Trump’s actions have finally hit rock bottom in such a way which could jeopardise his support among Republicans.  Although the images of children separated from their families are hard to look at, and while polls show that majorities of Americans (though not a majority of Republicans) are opposed to the policy, it is unclear whether support for Trump has been substantially altered by these or earlier controversies.  If our understanding of partisanship tells us anything, we should not expect support for Trump to have evaporated, now or in the foreseeable future.

While scholars have long noted that voters’ partisan affiliations change in response to their disapproval of parties’ and politicians’ actions (as seen in the seminal studies by V.O. Key and Morris Fiorina), there is also a deep appreciation of the remarkable stability of voters’ party attachments in the face of information that might seemingly lead voters to reorient their political loyalties.  The Michigan Model’s concept of party identification, referring to voters’ long-term psychological identifications as Republican or Democrat, is particularly helpful.  Party identification serves as a partisan filter through which information is interpreted, at times leading some supporters to change their own views and adopt the policy positions of their parties, and at others to evaluate parties/politicians on a partisan (rather than a policy) basis.  As a result, party identifications often remain stable, similar to one’s loyalty to a football team. 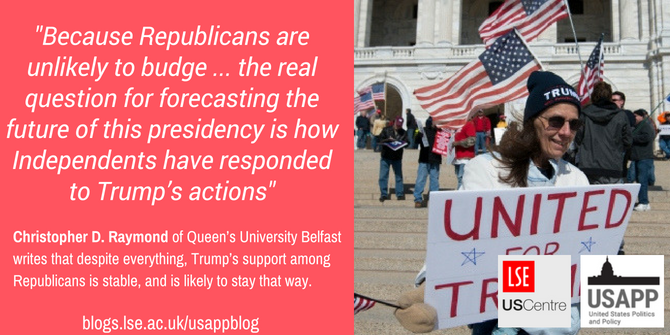 “Rally to support Donald Trump” by Fibonacci Blue is licensed under CC BY 2.0

To determine the stability of Republican support in the face of controversies relating to Trump’s actions, I examine data from two sources—Reuters/Ipsos and the Economist/YouGov—which have conducted weekly polling since the start of the Trump administration.  These data include polling from the end of June, with enough time lapsed following the scandals surrounding the separation of children and parents detained at the border to evaluate whether this latest scandal has impacted Republican support for Trump.  Figure 1 presents the percentage of Republicans who approve/strongly approve of Trump’s performance.  The Reuters/Ipsos data show that while approval dropped to about 75 percent in August 2017, it has subsequently rebounded to levels nearing the highs Trump enjoyed immediately after inauguration. 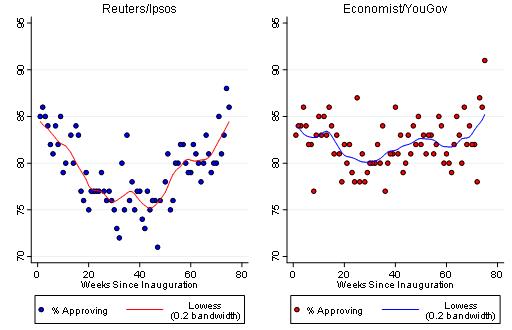 While Trump continues to enjoy solid support among Republicans, one common refrain from analysts is that these levels of support persist because Americans who once identified as Republican are leaving the party in droves.  The very public resignation by Steve Schmidt (who was a senior strategist in John McCain’s 2008 presidential campaign) last week is taken as evidence of such an exodus.  Trump’s actions are so heinous, these analysts claim, that lifelong Republicans are quitting the party, leaving only those few agreeing with Trump in the columns of Republican supporters reported in recent polls.

Two pieces of evidence refute this argument, however.  One is the evidence suggesting that the share of Americans identifying as Republican has not changed substantially over time.  This can be seen in Figure 2, which presents the percentages identifying/leaning Republican in the Reuters/Ipsos polls conducted since November 2016.  While the share of Republican identifiers fluctuates from poll to poll, the general trend in recent months is of relative stability (even if the longer-term trends are less clear): Republicans make up about the same share of the public as they did on the eve of the 2016 election. 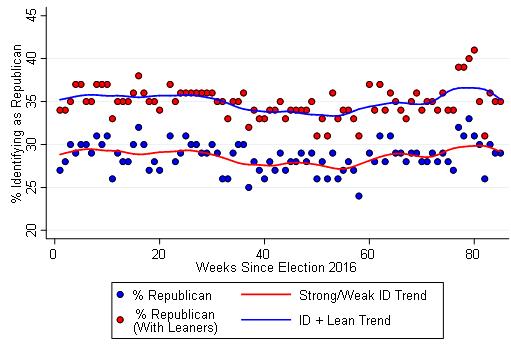 The second piece of evidence is that Trump’s approval among those who voted for him (using data from the Economist/YouGov) remains steady at around 90 percent (see Figure 3).  This suggests further that the remarkable stability in Republican support for Trump is not due to fluctuations in the number of Republicans.  While some respondents may mis-remember whether/how they voted in 2016, this measure may be less prone to (potential) major fluctuations than party identification.  Thus, there does not appear to be any serious loss of Republican identifiers. 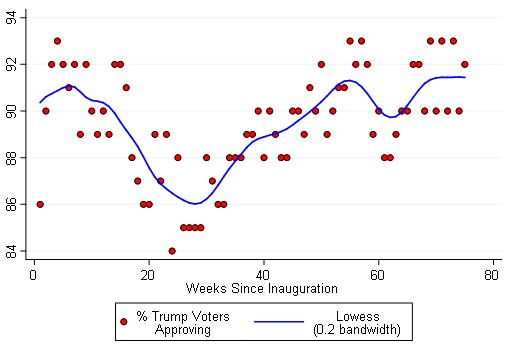 A number of commentators have, after each major Trump-related controversy (dating back to the primary campaign), asked what it will take for Republican voters to disavow Trump.  Apparently, we have not reached the limit, and the analysis above suggests we probably should not expect most Republicans to desert either Trump or their party any time soon.  Because Republicans are unlikely to budge (and Democrats are just as unlikely to suddenly find Trump endearing), the real question for forecasting the future of this presidency is how Independents have responded to Trump’s actions, as their lack of partisan attachment means they are more likely to be persuaded—and their decisions will determine whether Trump is re-elected.