What does the retirement of Justice Anthony Kennedy mean for the ideology of the Supreme Court? By examining the judicial record of one of Kennedy’s potential successors, Circuit Court Judge Brett Kavanaugh, Donald M. Gooch finds that not only would his appointment – or that of someone with similar views – push the Court farther to the right, it would also mean it would be more polarized, with far less chance of swing votes.

The conventional narrative on the United States federal courts is that they are institutionally insulated from the political forces that drive the elected branches: Congress and the presidency.  The constitutional checks on the court, in the era of judicial review, are relatively weak and ineffective. Life tenure prohibits any check by voters after they are appointed outside of the rarely used instrument of impeachment. And there are institutional and professional norms that ostensibly constrain judges from acting politically in their roles as impartial arbiters of the law.  Further, the courts operate generally in obscurity, with media attention to federal court decisions sporadic and fleeting, in all but a few rare exceptions at the level of the Supreme Court, such as Bush v. Gore, Obergefell v. Hodges, or National Federation of Independent Business v. Sebelius.  Nevertheless, as I pointed out in my 2015 article in American Politics Research and USAPP blog post on the ideological polarization of the Supreme Court, the Supreme Court is not, in fact, immune to the strong polarization forces that influence the elective branches of the US federal government.  Rather, ideological polarization is as much a feature of the Supreme Court in the modern era as it is in the US Congress.

Indeed, the Court has increasingly polarized ideologically in recent times, and the decision of Justice Anthony Kennedy to take senior status, and thus step down from his seat on the Court, will almost certainly exacerbate the polarization of the Court.  CBS News and the Washington Times have reported that President Donald Trump has narrowed down his short list for Justice Kennedy’s replacement to two finalists:  D.C. Circuit Court Judge Brett Kavanaugh and Chicago Circuit Court Judge Amy Coney Barrett. While Barrett was appointed just last year to the Seventh Circuit Court of Appeals, and thus no empirical estimate of her ideological position exists at this time, we do have data on Judge Kavanaugh, who has served in the federal courts since 2006.  Furthermore, the rumored short list, including Barrett, have similar ideological profiles to that of Judge Kavanaugh, and thus we can reasonably use his position as a proxy for Trump’s nominee.  Should a nominee like Judge Kavanaugh be chosen by Trump and confirmed by the Senate as Justice Kennedy’s replacement, it would both significantly polarize the current Supreme Court, and be one of its most profound ideological shifts in the past 40 years. 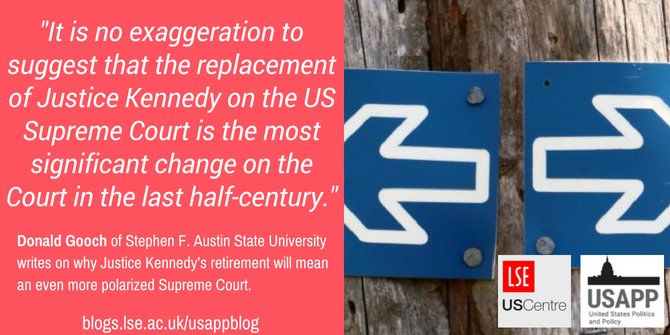 To illustrate the potential magnitude of the ideological shift in the Court due to Kennedy’s retirement in this context, we can look to the Judicial Common Space (JCS) scores developed by Lee Epstein as a measure of the ideological position of federal court judges and justices.  Though there are some underlying problems with the empirical estimation of the ideological placement of justices, particularly with respect to the selection effect of docket control at the level of the Supreme Court, the JCS scores are among the best available estimates for comparing the ideological disposition of judges across levels of the judiciary.  Figure 1 shows all twelve of the changes on the Court since 1980 and the potential replacement of Justice Kennedy with Justice Kavanaugh. The justice being replaced is listed first, and the new justice is listed second.  The bar represents the change in ideology of the justice for that particular seat, as measured by the last term of the departing justice and the first term of the new justice, using JCS scores.  The Kennedy-Kavanaugh shift comes in third, after the titanic shift in ideology due to the 1990 appointment of Clarence Thomas, one of the most conservative justices of the past four decades, to replace Justice Thurgood Marshall, one of the most liberal justices of the Twentieth Century, and the Brennan-Souter shift in 1989.   Of course, both of those appointments involved a Republican president replacing a Democratic appointed justice.  The Kennedy-Kavanaugh ideological shift would thus potentially be the largest in magnitude intraparty replacement since 1980.

However, the ideological shift at the time of the nomination is not nearly as significant as the long-term effect of a new justice taking their seat on the Court.  The average length of the term of a justice on the Court has increased in the modern era, and thus presidents have increasingly looked to the Court to establish legacies that extend well past the end of their terms.  Yet the impact of the nomination of a justice over time is largely out of presidential control, as justices exhibit varying degrees of ideological drift over their careers on the Supreme Court.  Some justices remain relatively consistent, while others move substantially in either direction.

We can see this in Figure 2, which illustrates the ideological shift due to a change on the Court since 1980, using the JCS score of the departing justice in their last term and the last or latest term (2016) of the justice who took their place.  Justice Souter, appointed by President George H. Bush, drifted substantially towards the ideological left over his career, such that by his final term in 2008 he was ideologically indistinct from Justice Elena Kagan, appointed by President Obama. He thus substantially reduced the ideological distance between himself and the justice he replaced, William Brennan.  On the other hand, while Chief Justice Roberts was an ideological carbon copy of Chief Justice Rehnquist in his first term, by the 2016 term, this had significantly changed. Chief Justice Roberts’ ideological profile in 2016 was to the left of that of Sandra Day O’Connor, a moderate swing vote in her last term on the Court, therefore widening the gap between himself and the final ideological position of Chief Justice Rehnquist.  Using this measure, while the Marshall-Thomas shift remains king, coming in second in the magnitude of ideological shift is the replacement of Byron White by Ruth Bader Ginsburg.  White had become increasingly conservative towards the end of his term, while RBG has moved steadily to the ideological left over her career, such that she now occupies the extreme left of the Court.  The Kennedy-Kavanaugh shift would start in third, just as it did in the previous analysis, but its ultimate disposition would depend on how Kavanaugh—or whomever President Trump nominates—changes ideologically over the course of their time on the Court. 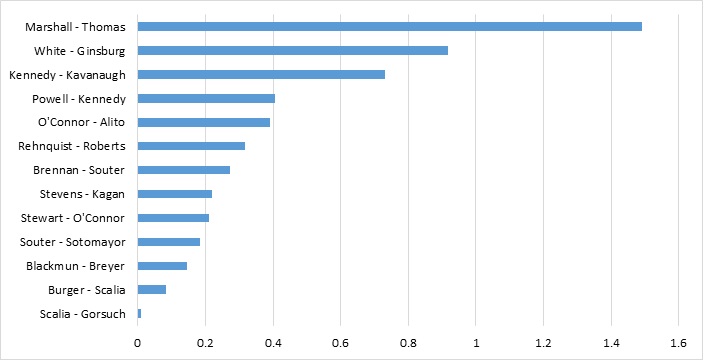 The impact on the current court in the 2016 JCS scores is apparent from the distribution depicted in Figure 3 compared to the distribution in Figure 4, with Judge Brett Kavanaugh’s 2018 JCS score standing in as a proxy for the likely nominee.    The median justice shifts from Justice Kennedy’s slightly liberal ideological position to the moderately conservative position of Chief Justice Roberts.  This represents a 17.3 percent shift in the conservative ideological direction in terms of the 2016 Court.  Using standard measures of polarization, I find that the difference between the Supreme Court justices’ ideological positions is likely to increase substantially. This potential shift will mean a substantial increase in the polarization of the Supreme Court with liberals and conservatives ideologies now standing in even starker difference to one another.

It is no exaggeration to suggest that the replacement of Justice Kennedy on the US Supreme Court is the most significant change on the Court in the last half-century.  All three of the landmark cases mentioned at the beginning of this article were 5-4 decisions, and in two of the three cases, Justice Kennedy was the deciding vote.  In the 2016-17 Court term, Justice Kennedy voted with the majority in 95.7 percent of all of the cases, and in only one did he file a full dissent.  He has been the deciding vote, and often the author of the opinion, in most of the impactful cases to come before the Court during his tenure.  His replacement on the Court will likely constitute a seismic shift in the ideological median of the Court, the polarization of the Supreme Court, and the Court’s interpretation of the law and the Constitution.