Independents are less likely to vote for Democratic minority candidates because they think they are more liberal.

Independents are less likely to vote for Democratic minority candidates because they think they are more liberal.

Why do minorities continue to be underrepresented in the US House of Representatives? In new research, Sarah Fulton and Sarah Allen Gershon investigate the role of race and partisanship in shaping voters’ sense of group identity, and how perceptions of the ideology of minority candidates affects vote-choice. They find that white independent and Republican voters perceive non-white Democratic candidates to be more liberal. These voters, they write, perceive exaggerated ideological differences for those candidates who belong to two ‘out-groups’: both race and party.

Non-whites make up 38 percent of all Americans, but only 23 percent of members of the US House of Representatives. Why are there so few minorities in Congress?  Our research indicates that white voters’ beliefs about candidate identity shape their willingness to vote for candidates of color.

Individuals perceive greater similarity with those whom they share an identity and greater difference with those whom they do not; in other words, sharing a group identity (or being part of an ‘in-group’) with a candidate leads voters to believe they have similar attitudes, however, not sharing an identity (or being part of an ‘out-group’) leads them to expect differences between candidates’ beliefs and their own.  In our research, we focus on two kinds of group identities: race and partisanship. We hypothesize that white Democratic voters will view minority Democratic candidates as belonging to one out-group (race) and one in-group (partisanship).   In contrast, we expect that white Republican and independent voters will sense that minority Democratic candidates belong to two out-groups (racial and partisan), which should amplify their perceived differences with these candidates.

We look at how voters perceive the ideology of minority candidates, and whether this affects their vote-choice.  While previous research has centered on white partisans, our work is unique in engaging the perceptions and behavior of white independents. 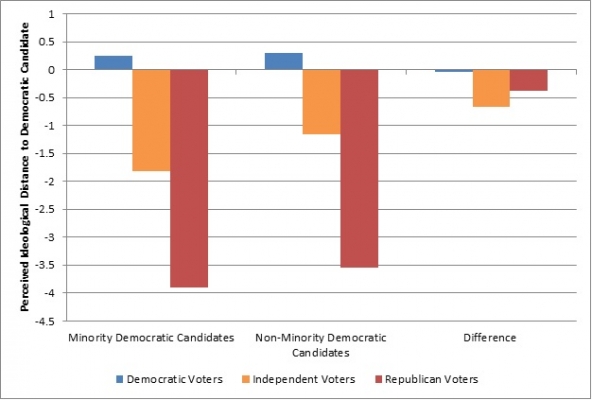 One reason why voters might perceive minority Democratic candidates to be significantly more liberal is because they might objectively be more liberal.  To see whether perceived ideological distance is rooted in reality or is a reflection of inaccurate stereotypes, we conducted an OLS regression analysis of perceived ideological distance, after taking into account other objective measures of liberalism, like: DW-NOMINATE scores and CFScores.  We also included a new measure of candidate ideology to add analytical rigor to our test. This measure of candidate ideology draws upon the perceptions of multiple district informants who rate the same candidate in the same district.  This generates an average opinion of candidate ideology that is based on the assessments of individuals who are embedded in the congressional district and who are familiar with the candidates.  By integrating different indicators of ideology, we can better gauge the extent to which voters’ assessments of minority candidates are rooted in or disconnected from more objective indicators of ideology.  By incorporating all three measures of ideology, our analysis constitutes a strict test of the hypothesis that independents and Republicans misperceive their ideological distance to Democratic minority candidates. 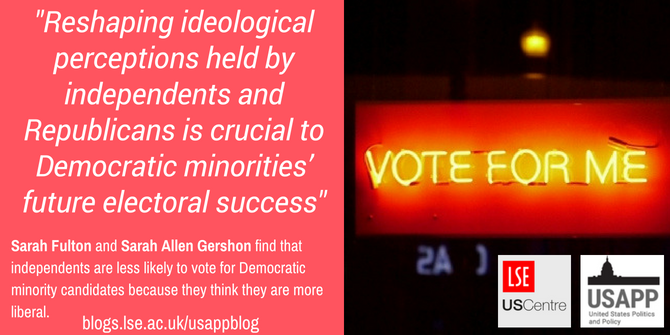 “Vote For Me” by the justified sinner is licensed under CC BY NC SA 2.0

Figure 2 shows the predicted ideological distance Democratic, Republican, and independent voters perceive between themselves and a minority or non-minority candidate.  When the confidence bands (vertical lines) overlap, as in the case of Democratic voters, we conclude that there is no significant difference in how Democratic voters perceive minority and non-minority candidates.  But, when the confidence bands do not overlap, as in the case of Republican and independent voters, then we conclude that they perceive minority and non-minority candidates differently.  The graphic provides robust evidence that white independent and Republican voters perceive non-white Democratic candidates as more liberal, and that this perception of difference cannot be explained away by alternative explanations that might account for the ideological distance.  In contrast, Democratic voters’ views about ideological proximity are unrelated to the candidate’s racial identity.  These findings are wholly consistent with our group identity theory which predicts that white independent and Republican voters will perceive minorities as belonging to two out-groups (racial and partisan), and thus will exaggerate their perceived ideological differences.  In contrast, white Democrats only differ from minority Democratic candidates on the race dimension, and thus perceived ideological differences should be minimized. 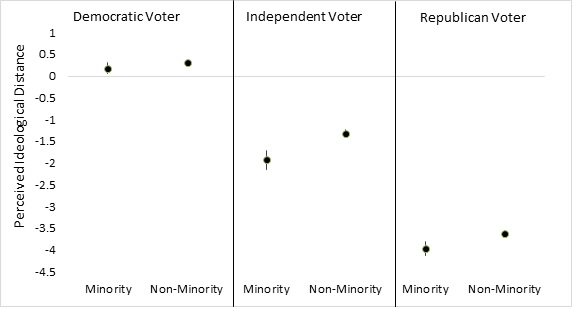 What are the implications of our findings? To investigate, we run a logistic regression on the probability of voting Democratic in a congressional race and include a variety of controls for respondent, candidate and district characteristics. 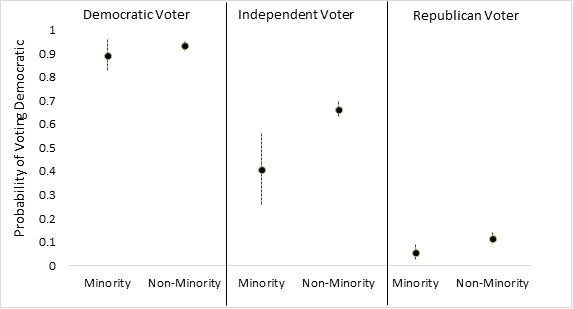 Why do perceptions of ideological distance exert a stronger effect on independents’ vote-choice than on Democrats’ or Republicans’?  In the context of increasingly polarized congressional elections, partisanship is the strongest predictor of vote-choice. For partisan voters, ideological perceptions may make a difference at the margins, but by in large, their vote-choice will reflect their partisanship.  But because independents are uncommitted to either party, factors like ideological perception will exert a stronger impact.  If independents are the only group that is truly “up for grabs”, Democratic minorities’ electoral prospects will be diminished in moderate and swing districts with large proportions of white independents.  Minority Democrats’ difficulty in appealing to independent voters may account for their paucity outside of heavily Democratic areas, like those found in majority-minority districts.  Our results demonstrate that reshaping ideological perceptions held by independents and Republicans is crucial to Democratic minorities’ future electoral success.