Recent years have seen immigration become a new ‘third rail’ in American politics, with positions on undocumented and legal immigration varying on party and regional lines. In new research, Tyler Reny examines US Senate candidates’ appeals on immigration during election campaigns. He finds that Republicans tend to use anti-immigrant appeals and that Democrats are generally more pro-immigrant, and that each party is more likely to make these appeals the larger a state’s Latino population. Once a state’s Latino population becomes large enough, however, he finds that Republican anti-immigrant appeals become less likely as countermobilization efforts become stronger.

Immigration has emerged as one of the defining issue of American politics under Donald Trump’s presidency. From a campaign launched with racially incendiary language, to the “Muslim Ban,” cancellation of the Deferred Action for Childhood Arrivals (DACA), reduction of refugee resettlement, and forcible separation of parents from children at the border, President Trump has used the powers of the presidency to make changes to immigration policy all while excoriating Congress for its inaction on the issue. Yet Congress hasn’t been sitting on the sidelines, they have tried to pass a fix for DACA, tried to pass a compromise package with border wall funding and a DACA extension, and recently a bi-partisan group of House Members signed a discharge petition that could force a vote on DACA in the House. Despite the fact that immigration positions have polarized, there are still a variety of elite views on immigration. What then explains immigration politics among elites? In a recent work, I argue that the interaction between state level demographic change, voter demographics, and electoral competition make appeals about immigration more attractive to elites during their political campaigns.

Traditional Black-White racial appeals have certainly not disappeared from politics but the increasing importance of immigration, due to rapid demographic change, has increased the volume of racialized immigration-based appeals from political elites. On the Republican side, culturally conservative elites have increasingly appealed to white voters with dire warnings of the cultural and political threat of the Hispanic “invasion.” On the Democratic side, Democratic candidates are increasingly appealing to the growing Latino population with group-based appeals like immigration. As a result, Republicans and Democrats both face electoral incentives to address immigration. But that still doesn’t explain variation in candidate campaign appeals. To better understand that variation, we must look to state-level demographic and political factors.

First, demographic change is rapidly and visibly shifting the makeup of much of the US population. While immigrants traditionally settled in a handful of receiving states like Texas, California, New York, Illinois and Florida, new arrivals are increasingly settling in smaller communities across the South and Midwest, communities that were far more likely to be white and racially homogeneous. It is in these “acculturating contexts,” that immigrants are seen as particularly threatening, where white voters are more able to connect their local contexts to national immigration narratives, and where I expect Republican candidates to be most likely to use anti-immigrant appeals. 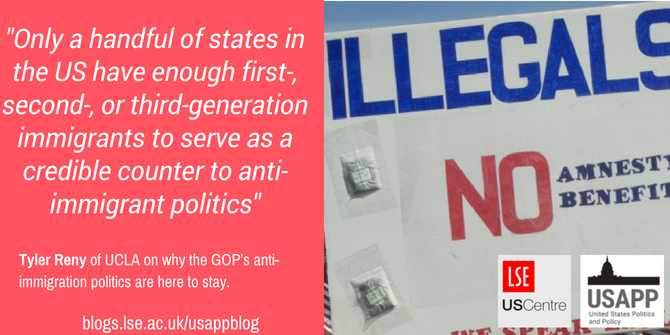 “ILLEGALS” by Tim Pierce is licensed under CC BY 2.0

While demographic change could incentivize anti-immigrant appeals from conservative candidates, Latino countermobilization—a backlash effect—could disincentivize such appeals. California’s experience in the early 1990s is illustrative. Governor Pete Wilson ran a re-election campaign almost exclusively on his support for Proposition 187, a punitive anti-immigrant ballot measure. In the long term, the fight over Proposition 187 mobilized Latinos to be politically active and helped cement Democratic control of state politics which continues to this day. Thus, it is likely that larger Latino voting populations will increase the likelihood that Democrats will use pro-immigration appeals while decreasing the likelihood that Republicans will use anti-immigrant appeals.

Finally, candidate strategy is heavily influenced by perceived electoral competition. Candidates who are leading by wide margins in the polls may simply choose to play it safe and avoid contentious issues.  Those who are losing may try anything to improve their standings in the polls. Those in competitive elections, however, have to be most strategic about which groups they mobilize and the tradeoffs inherent in those choices. For both Republicans and Democrats, immigration appeals are likely an attractive issue to mobilize key voters, conditional on state demographics.

To test these hypotheses, I turned to look at electoral campaign appeals in US Senate campaigns. While congressional voting patterns can be revealing, few bills dealing with any given issue area actually come up for votes in Congress and when they do they are often packaged together with other issues. Candidates for elected office, however, often take public stances on a host of major issues in their bids for public office.  In total, I scraped the campaign websites of 616 candidates who ran for US Senate in 2010, 2012, and 2014 to measure these appeals. Because US Senate seats are held for 6 years, and elections are staggered, this dataset covers the campaigns for every US senate seat. I coded whether the candidate used punitive immigration language, welcoming immigration language, or no immigration language at all. I then regressed this outcome on my key explanatory variables—demographic change in each state, size of the Latino voting population in each state, and level of competition in each candidate campaign—together with a host of additional control variables (for more detailed methodology, see the full article here).

Figure 1 – Distribution of Appeals across Parties 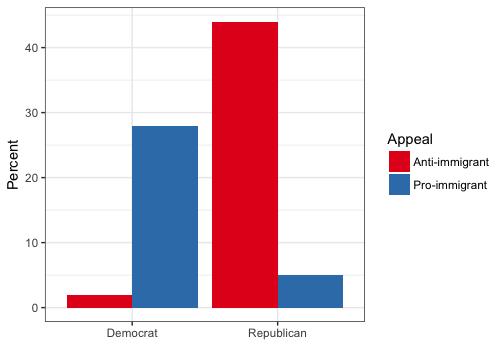 Second, with respect to changing demographics, I find strong support for my hypothesis. As I show in Figure 2, as the rate of demographic change in the state increased, so too did the probability that Republicans would use anti-immigrant appeals. Demographic change had no effect on Democratic immigration appeals. 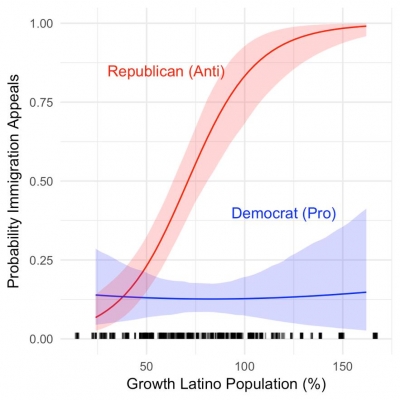 Note: Solid lines indicate the predicted probabilities of using immigration appeals for candidates from both parties across the full range of state-level Latino population growth. All other covariates held at their means. 95% confidence intervals.

Note: Solid lines indicate the predicted probabilities of using immigration appeals for candidates from both parties across the full range of state-level Latino population growth and for each level of competition.

If we want to understand immigration politics in Congress, it’s important to look to the political and demographic incentives that elected officials, and candidates running for office, face. My study hints at the political cycle of demographic change. As states begin to diversify, anti-immigrant politics are likely to dominate. As the immigrant population grows and registers to vote, however, Democrats will begin to mobilize these voters and the incentives to use xenophobic appeals decrease. Yet only a handful of states in the US have enough first-, second-, or third-generation immigrants to serve as a credible counter to anti-immigrant politics. Until they do, we can likely expect anti-immigrant politics to play a significant role in American politics for the foreseeable future.

Tyler Reny – UCLA
Tyler Reny is a PhD Candidate in political science at UCLA. His research examines the political impacts of demographic change and the origins of racial attitudes in the United States and has work published or forthcoming in several academic journals including the American Political Science Review, Comparative Political Studies, Social Sciences Quarterly, and Aztlan. You can find more information on his website www.tylerreny.com and follow him on Twitter @tylerreny.