Since 2010, the California State Assembly has seen white representation fall and an increase in the number of African American, Asian American and Latino legislators. Sara Sadhwani writes that much of this change may be down to the Golden State’s adoption of the top-two primary system in 2012, which allows candidates to compete in an open primary with the top two vote winners advancing to the general election, regardless of their party.

President Donald Trump’s push to “make America great again” has re-ignited the issue of ‘good’ representation of women and minority communities. Many observers, including House Democratic leader Nancy Pelosi, argue that the underlying meaning of his campaign slogan is to deny women and burgeoning communities of racial, ethnic and religious minorities access to US institutions, claiming the slogan is a mask for a generational throwback to times when white men held the reins of power. Indeed, the president has faced stern criticism for a lack of gender and racial diversity among his nearly 2,500 administrative appointments.

Scholars have long debated the extent to which gender and racial parity would constitute ‘good’ representation for women and minorities. At the heart of this debate is a need to balance inclusion as measured by the raw numbers of women and minorities that hold elected or appointed office with quality and substantive considerations about the kind of representation that is received. Yet, scholars have also long known that the structure of electoral institutions can constrain ‘good’ representation, keeping women and minorities from ever achieving elected office. Examples such as Jim Crow laws that denied African Americans the ability to vote and more recent changes to voter identification laws that restrict access for those without readily accessible documentation pervade US history.  Beyond executive branch diversity, whose fate lies at the hands of an individual, are underrepresented communities achieving ‘good’ representation through the United States’ electoral system?

In the politically progressive and racially diverse state of California, new electoral innovations appear to be having relatively beneficial representational effects for women and minority communities. In the last several years, Californians have used their direct democracy system of the ballot initiative to adopt three institutional changes to its electoral system: A top-two primary system, a nonpartisan citizen redistricting commission and term limits for state representatives. 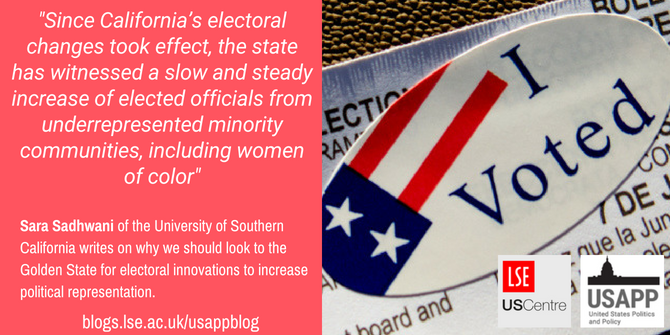 Among the most radical of changes is the switch to a top-two primary system, where candidates compete in an open primary and the top two vote-getters – regardless of party – advance to the general election. The initiative was touted as an institutional design that would lead to more moderate elected officials. The logic suggested that in Democratic or Republican stronghold districts where two candidates from the same party might compete, a moderate candidate would garner broader support. Indeed, since the adoption of the initiative took effect in 2012, forty-four general elections have featured candidates from the same party, though scholars have not found any conclusive evidence of systematic moderation.  The potential diversifying effect of the new primary system, however, became a focal point in 2016 when voters in the state had the option of Kamala Harris or Loretta Sanchez – both Democratic women of color – who vied for an open US Senate seat.

Since California’s electoral changes took effect, the state has witnessed a slow and steady increase of elected officials from underrepresented minority communities, including women of color. Perhaps the greatest change can be seen in the California State Assembly, where the percentage of whites in 2016 dropped 17.5 percent from 2010, before the changes took effect. Over the same period, racial minorities saw increases in their share of elected office holding, including African Americans (2.5 percent increase), Asian Americans (5 percent increase) and Latinos (10 percent increase). Women of color increased their share of the assembly by nearly 8 percent as well.

With only three elections completed, it is too soon to establish a definitive link between the inclusive electoral design changes that California has implemented and the increases in diversity found within the state assembly. Indeed, during this same time California has continued on its course of demographic change and increases in newly naturalized voters. In 2015, California officially became a majority-minority state with Latinos outnumbering whites. Nonetheless, while the Trump administration may be regarded as attempting to return the United States to a time when the exclusion of diverse voices was an accepted norm, California’s electoral innovations could be viewed as striding forward toward the ideal of ‘good’ representation of historically underrepresented groups and communities.