About 5 million children born in the US live with at least one undocumented parent. In new research, Alex Street investigates what having an undocumented parent means for their children’s’ interest in civic and political engagement later on in life. Rather than having a chilling effect, as might be expected, he finds that the children of undocumented immigrants have the same level of interest in community involvement, and are actually more likely to be activists on immigration issues.

According to Pew, as of 2015, there were about 11 million undocumented immigrants in the US. That the US has a large undocumented population is not a new finding; less well known is the fact that most have lived in the United States for a decade or more, and that many have US-citizen family members.  This is largely because the 14th Amendment to the US Constitution ensures that almost everyone born in the country is a US citizen.

An estimated 5 million US-born children live with one or more undocumented parents, and millions more grew up in such families but have now started households of their own.  Since most undocumented immigrants are Latino, studying the experiences and views of these young Americans is especially important for understanding the future of Latino politics.

In contrast, other research implies that the experience of growing up with undocumented parents may push young Americans towards activism.  Research on social movements suggests that one of the factors that make people feel they must organize and protest, rather than leaving this work to others, is when strong cultural norms—such as family unity—are violated.  This may help explain why “Stop Separating Families” is one of the most common slogans for immigration activists and why so many children joined the large Immigrants’ Rights marches of 2006.  Following this logic, we might expect the children of undocumented immigrants to be more politically active than their peers, at least on immigration issues. 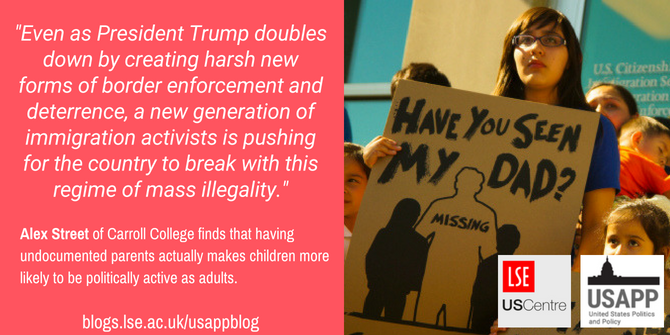 “Stop Separating Families” by Joe Brusky is licensed under CC BY NC 2.0

In new research, we used a new survey of young US-born Latinos to test these alternatives.  We find no clear differences by parental legal status in levels of community involvement.  People who grew up with undocumented parents are just as likely to join a school’s Parent-Teacher Association, attend meetings or volunteer for a church or charity.  This implies there are no “chilling” effects of parental legal status in this area.  The US-born children of undocumented migrants are apparently learning much the same habits as their peers, either because their parents have not been scared away from the civic sphere or because schools and local networks have filled in any gaps.

Moreover, we also find signs of “activating” effects of growing up with undocumented parents, when it comes to immigration issues.  Even controlling for other factors, the children of the undocumented are more likely to have participated in marches or rallies for immigrants’ rights.  And they are up to 20 percentage points more likely to say that they think protest is an effective way to demand political change.

As is so often true in the social sciences, it is hard to prove that these differences are due only to parental legal status, since people differ in all sorts of other ways.  So we ran some extra tests.  In particular, we compared otherwise similar people whose parents happened to arrive before or after a date in the early 1980s that was later used as the cut-off for an amnesty program for undocumented migrants under the 1986 immigration reform.  The results support the claim that having undocumented parents actually causes the US-born offspring to be especially active on immigration politics, as they emerge into early adulthood.

More than three decades have now passed since the last big US immigration reform, in 1986.  In that time, the federal government has passed many laws and regulations to make it harder to cross the US-Mexico border and to make it easier to deport migrants who are not authorized to stay and work in America.  Few Americans are satisfied with the combined result of inaction on migration policy along with harsh enforcement measures: a large, long-settled population of fearful immigrants.  Even as President Trump doubles down by creating harsh new forms of border enforcement and deterrence, a new generation of immigration activists is pushing for the country to break with this regime of mass illegality.  If they succeed, the US-citizen children of undocumented migrants are likely to play a central role in this movement.

Alex Street – Carroll College
Alex Street is an Associate Professor of Political Science and International Relations at Carroll College in Helena, Montana.  He studies immigrant political participation and elections in Western Europe and North America.  He has recently published an article on the political effects of immigrant naturalization in Germany (party preferences solidify, but only for second generation migrants) in the journal International Migration Review.