Ahead of presidential elections, the Republican and Democratic parties signal their agendas by releasing policy platforms. But do parties’ promises to focus on one issue over others remain credible following the election? In new research, E.J. Fagan examines party platforms and Congressional roll call votes, and finds that the party which holds the White House does keep its agenda-setting promises, but only until the next midterm elections, when attention snaps back to issues pushed by the other party.

Every four years, US political parties release a platform at their national presidential nominating conventions. These platforms are long, detailed documents, both listing hundreds of the party’s policy positions and making their case to voters that they should be elected into power. In a country with parties composed of decentralized networks of party actors and elected officials, the platforms represent one of the only official statements of the party’s promises for public policy.

These platforms raise the question: do parties keep these promises? The question is deceptively difficult to answer in a political system with high institutional friction, multiple veto points and rapidly shifting policy preferences. My work focuses on one particular kind of promise: signals that a party believes one issue to be more important than others and will receive a disproportionate share of scarce resources from lawmakers once elected into office. If these promises are credible, a voter should be able to observe the relative emphasis of issues in each party’s platform and choose between two different sets of priorities if that party is elected to power.

To understand the importance of agenda setting for representation, one needs only to look at the Democratic Party’s legislative agenda after the 2008 election. Democrats promised large reforms on health care, climate change, and immigration policy in their late-August platform. Just three weeks later, Lehman Brothers declared bankruptcy, kicking off the worst financial crisis and recession since the 1930s. Once elected to office, Democratic lawmakers and President Obama had to focus much of their time, energy and political capital on stabilizing the economy and solving the problem of the broken US financial system. Amidst the chaotic first year, Democrats chose to address their biggest campaign promise, a major expansion of the US public health care system (Obamacare), instead of creating a cap and trade system for carbon emissions or a path to citizenship for undocumented immigrants. Two years later, Republicans regained control of the House of Representatives, eliminating any near-term possibility for either ignored priorities to pass.

Promises to devote disproportionate attention to an apparent problem should be difficult to keep. Party platforms are released months to years before Congress is able to act on an issue. In the meantime, the most important problems facing lawmakers can change. In the Democrat’s case, they not only had to deal with the direct fallout of the Great Recession, but also the Deepwater Horizon oil spill in the Gulf of Mexico, the Arab Spring, wars in Iraq and Afghanistan and a horrific earthquake in Haiti.

Do Parties Keep Their Agenda-Setting Promises?

To answer if parties keep their agenda setting promises, I borrow data and methods from my colleagues at the Comparative Agendas Project (CAP), one of political science’s largest and most comprehensive data collection efforts. Scholars at CAP collected observations of the outputs of government and politics, such as lines in the party platforms collected by Professor Christina Wolbrecht at Notre Dame University, and categorize them using a common coding scheme, all available using a convenient graphing tool on the CAP website. Each observation is classified into one of 20 major topic areas, such as health care or energy policy, and 221 subtopic areas, such as pharmaceutical regulation or nuclear power. Using this system, we can compare, for example, the proportion of Congressional hearings on health care to the proportion of the Democratic Party Platform devoted to health care. If attention tends to increase after an issue is emphasized in the platform, the promises signaled by issue emphasis in the platform are credible, and voters have the ability to choose between two different sets of priorities.

When we do this across all 20 major topic areas, as shown in Figure 1, we see significant alignment between platforms and roll call votes:

In my research, I perform additional analysis using time series cross sectional methods. I conclude that parties do keep their agenda setting promises on legislative activity in the Congress immediately after the election, such as roll call votes, but non-legislative activity, such as oversight hearings, do not appear to be related to the platform.

My results suggest a second interesting finding: the attention shift is temporary. Understandably, party platforms convey little information about the Congressional agenda after the midterm elections. At that point, nearly three years of intervening events have brought new information to members of Congress that was unavailable to platform committees. However, I find that something else happens in the second Congress after the midterm election: attention snaps back. Issues that were emphasized in the President’s platform are deemphasized, while issues emphasized by the other party, even if they are in the minority, are resurgent. I attribute the snap back to the mechanics of disproportionate information process, as argued by Bryan Jones and Frank Baumgartner in their book, The Politics of Attention. They argue that if Congress devotes disproportionate resources to one issue at a given time, they must necessarily ignore others. Problems build up in the ignored issue area, and Congress is forced to quickly pivot away from the issues they originally paid extra attention to and toward the ignored ones. In the long run, attention evens out.

E.J. Fagan – University of Texas at Austin
E.J. Fagan is a PhD student at the University of Texas at Austin. He studies agenda setting, political parties, Congress, think tanks, social policy and budgetary policy. In particular, he is interested in how legislatures process information and solve problems, and how capacity, ideology, and accountability impact problem-solving.

Posted In: E.J. Fagan | Elections and party politics across the US 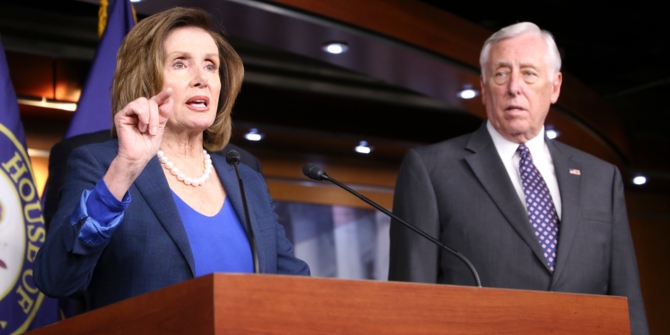