During her tenure as Secretary of State, and later during her 2016 presidential election campaign, Hillary Clinton called for women’s rights to be central to US foreign policy. In new research Nilay Saiya, Tasneem Zaihra and Joshua Fidler find that improving women’s rights outside of the US actually helps to make the US safer; countries where women can be educators and also have economic rights are less likely to be the source of anti-American terrorism.

Hillary Clinton has long been a champion of international women’s rights, believing that the “rights of women and girls is the unfinished business of the 21st century.” She made the status of women a central concern of her tenure as Secretary of State, articulating at her Senate confirmation hearings in 2009 her belief that women’s rights should be “central to our foreign policy, not as adjunct or auxiliary or in any way lesser than all of the other issues that we have to confront.” She made similar statements in her campaign to become America’s 45th president in 2016.

Recently, Clinton has taken the issue of women’s rights further, considering it an issue of national security rather than just a normative concern. At the 2010 TEDWomen Conference in Washington D.C., she unequivocally stated that the empowerment of women and girls was not just a humanitarian and moral issue but a security issue as well—one with direct implications for international and US national security. “Give women equal rights, and entire nations are more stable and secure. Deny women equal rights, and the instability of nations is almost certain. The subjugation of women is, therefore, a threat to the common security of our world and to the national security of our country.”

These statements explicitly linking women’s rights to national and international security have come to be known as the “Hillary Doctrine.” While a growing body of literature supports a key part of the Doctrine—that countries which support women’s rights tend to be more stable, secure and prosperous—a crucial component of Clinton’s claim remains untested—that the empowerment of women makes the United States more secure. In new research, we test this claim by examining if countries that repress women are more likely to produce terrorists who threaten American national security. We find that they are, and that countries with better women’s rights are less likely to do so.

The link between women’s rights and anti-American terrorism

It may not be immediately clear why the provision of women’s rights would result in lower levels of anti-American terrorism. After all, the vast proportion of the world’s terrorists is men. We argue that the lack of female empowerment makes it more difficult for women to function as barriers in the radicalization process, thus providing more opportunity for terrorism to take place, both domestically and against other countries. On the other hand, where women enjoy the same rights as men, they have more ability to voice their opposition to the use of force by making their case within their families, communities and political systems. We theorize different pathways by which political, social and economic rights for women have a mitigating effect on anti-American terrorism. While all three contribute collectively to the concept of women’s rights, they exhibit unique ways in which women’s rights can be violated. The presence of these rights also undercuts support for and motivation to engage in terrorism in different ways.

Political rights allow women but a brake on the political process if needed and help prevent states from externalizing their masculine violent norms in their interactions with other states, including the use of state-backed extremist groups. Politically-empowered women will be less likely to support violent anti-American groups and the exporting of radical ideologies abroad. Thus, countries that are restrictive of women’s political rights will be more likely to give rise to anti-American terrorism than those where such rights are respected.

The importance of empowering women to educate

Social rights concern how women are treated and viewed by society as a whole. One of the most important ways in which social norms of gender inequality can lead to anti-American terrorism concerns the realm of education. Where children are educated exclusively by men, they are far more likely to be taught traditional gender norms emphasizing dominance, aggression and the importance of maintaining the gender status quo. Not only do these norms drive social conflict, they can also sow seeds of violent anti-Americanism. Some male-dominated madrassas in the Islamic world, for instance, are notorious for instilling and reproducing violent anti-Americanism among the children they educate. In these radical schools, children are taught that Muslims and non-Muslims cannot coexist peacefully and that they have been hand chosen by God to rescue the world from its decadence by declaring war on the enemies of Islam. Students learn that no country represents a greater or more evil enemy than the United States. 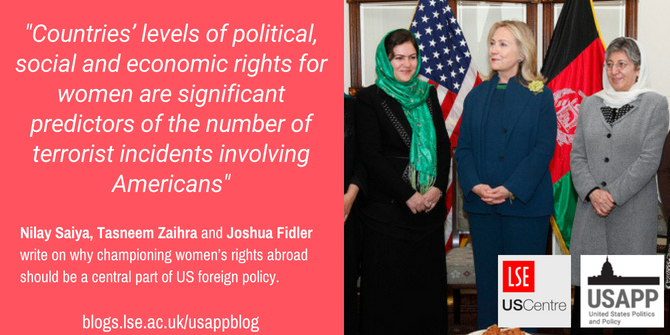 Image by “US Embassy Kabul Afghanistan” is licensed under CC BY ND 2.0

On the other hand, when women are empowered to educate young people (and, indeed, obtain education themselves), they are also enabled to become the custodians of cultural values, communicate those values to future generations, and promote tolerance and nonviolent political and civic engagement. The presence of women teachers makes it less likely that educational systems will degenerate into incubators of violent anti-American extremism. Female educators are also uniquely positioned to counter the myth that violence is glorious and speak directly to the sufferings that such ways of life can have on wives and daughters who are differentially impacted by conflict. In this way, they can play an important role in countering violent radicalization before it occurs.

The importance of women’s economic rights

The final link between a lack of female empowerment and terrorism involves women’s economic rights. With respect to anti-American terrorism, economic equality naturally generates higher levels of wealth. An overwhelming body of work has shown that countries which are stable and prosperous not only do not experience terrorist attacks inside their borders, they also do not give rise to terrorist attacks against other countries. On the other hand, countries not marked by gender equality in the economic area tend to be poorer. In these countries, terrorists will have an easier time persuading their audience that certain countries or organizations are responsible for their economic deprivation. As the world’s richest and most powerful country, the United States is especially vulnerable to such a charge. This claim has far less credence in relatively prosperous countries—where women participate in the workforce, have equal access to land, and contribute to productivity.

Our research finds strong support for the Hillary Doctrine. To be sure, this does not suggest that gender repression is the only state-level variable behind anti-American terrorism, only that the existence of laws which codify traditions preventing society at large from seeing women as less valuable than men tends to fuel terrorism against Americans more often than countries where these restrictions do not exist.