Communication strategies matter in elections. Candidates can be ambiguous in how they speak to the public by avoiding clear positions and strong statements or they can communicate by taking clear and consistent stances on issues.  How do voters respond to these different strategies? In new research Christine Cahill and Walter J. Stone find that voters tend to feel more negatively about candidates who are more ambiguous in their statements. With this in mind, they argue that candidates in the upcoming 2018 election should clearly and consistently communicate their policy positions to the electorate in order to maximize their chance of winning.

There are many ways for candidates to be ambiguous on policy positions.  They may emphasize different priorities or even different policy stances tailored to different audiences; they may be perceived as ambiguous because they remain largely silent on a given policy issue; they may emphasize an issue that people often have strong feelings about, for example by saying they want to reduce crime, without spelling out how they would accomplish a shared goal.

For example, Democrat Conor Lamb narrowly won a special election in Pennsylvania’s 18th US House District in early 2018.  The 18th District is historically Republican: previous Republican presidential candidates defeated the Democratic candidate by over 20 points, including the 2016 election, and the congressional Republican seat has been unopposed in the last two races. During the campaign Mr. Lamb (D) was often criticized by media outlets for avoiding clear policy stances and for being inconsistent on principled issues, such as gun ownership and abortion, in attempts to appeal to a wider net of voters. In this particular case, Mr. Lamb’s strategic ambiguity may have helped him win the competitive election.

In contrast, candidates can clearly and consistently maintain policy positions throughout the duration of an election period.  Voters may reward candidates that take a principled policy stance. In this case, it would be costly to remain ambiguous. Which of these communication strategies do voters prefer?

“Vote For Me” by the justified sinner is licensed under CC BY NC SA 2.0

Research in political science and psychology provides evidence for success for both communication styles.  Just like a first date, the more vague or quiet someone is, the more an individual may initially like them; studies show that people tend to project their own preferences or values onto quiet or ambiguous individuals.  On the other hand, other studies indicate that ambiguous politicians might be linked with incompetence and inexperience in office, and voters may especially distrust candidates who flip-flop their positions on issues.

To study the impacts of the clarity of candidates’ policy positions, we use data from the UC Davis Election Study and the 2010 CCES Common Content.  We measure policy ambiguity by looking at the extent to which political experts agree on a candidate’s policy position on a liberal-conservative scale.  It should be more difficult to place a candidate who avoids policy stances or takes inconsistent policy positions, thus we should expect there to be greater dispersion in experts’ placements of ambiguous candidates.  The more disagreement among raters, the higher the ambiguity of a candidate’s ideological position. 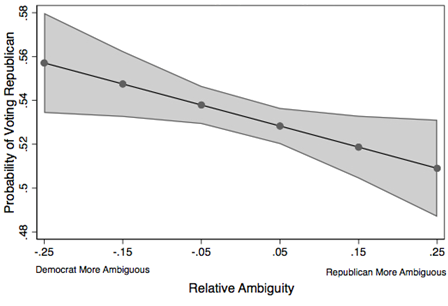 The second interesting result emerging from the analysis is that voters think about policy ambiguity in a negative way. Voters are asked to rate the honesty and integrity of the Democratic and Republican candidates in their districts.  We take the mean voter rating to create a “valence (feelings) differential” between the Republican and Democratic candidate in a district. Positive numbers indicate the Republican has a higher (more positive) rating compared to the Democrat, and negative numbers indicate the opposite.

Figure 2 shows the effect of policy ambiguity on how people feel about candidates. As a Republican’s policy positions become increasingly ambiguous compared to the Democrat in her district, the Republican candidate’s rating become significantly more negative.   Candidates who attempt to broadly and ambiguously appeal to all voters are thus more likely to be seen as dishonest and lacking in integrity. 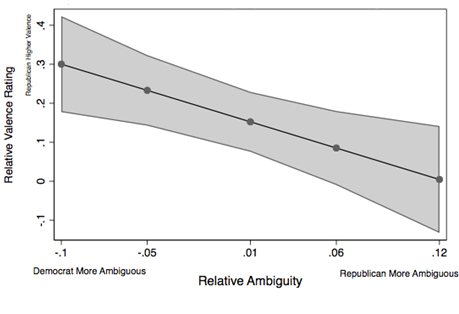 Voters must be able to distinguish and differentiate between the policy positions of candidates in order to make an informed vote that coincides with their own policy preferences.  Thus the evidence we show for a punishment effect for ambiguous candidates is actually a positive finding for the democratic health of elections.  Moreover, the statistically significant association between policy position ambiguity and voters’ negative feelings is a potential mechanism to explain why voters punish ambiguous candidates.  Successful communication strategies in elections and first dates are thus fundamentally different: while vagueness and ambiguity may score a second date, politicians should instead strive for clarity and consistency to win elections.

Walter J. Stone – UC Davis
Walter J. Stone is Professor Emeritus and Research Professor at UC Davis.  His most recent book is Candidates and Voters:  Ideology, Valence, and Representation in US Elections (Cambridge 2017).