Recent decades have seen a sea change in cannabis regulation in North America beginning with the legalisation of the drug for medicinal use in the 1990s in some US states and then referendums which legalised marijuana for recreational use in many states after 2014. But has cannabis legalisation been a good thing? Wayne Hall writes that despite growing support from the public and some state governments, there is simply not enough evidence yet to answer that question definitively.

Cannabis use was prohibited by the United Nations Single Convention on Narcotic Drugs in 1961 because it was believed to pose a serious risk to users’ health. Critics of cannabis prohibition have argued since the 1970s that the drug is much less harmful than alcohol and that criminal penalties are a disproportionate punishment for a behaviour that, at worst, harms the user. According to reformers, cannabis would be better legalised and regulated in the interests of public health.

In the US in the 1970s when cannabis use was very common among young people, the most radical reforms removed criminal penalties for possession and use. On the other side of the Atlantic, the Netherlands decriminalised small retail sales in coffee shops. Criminal penalties for cannabis use were removed in some Australian states in the 1980s and in some EU countries in the 1990s and 2000s but more radical reform largely stalled for over a decade.

What factors were responsible for these radical changes in cannabis policy?  In the US, public support for legalisation in surveys increased steadily during the early 2000s, achieving a majority in 2011. One factor was a well-funded movement to legalise medical cannabis use, funded by George Soros and other philanthropists. Medical cannabis use was legalised via citizen-initiated referendums, first in California in 1996 and later in nearly 30 other states. Reformers in some of these states used medical cannabis laws to bring about the de facto legalisation of recreational use. They did so by broadening what counted as medical use and establishing retail “cannabis dispensaries” that flourished after the Obama administration announced that it would not enforce Federal cannabis prohibition in these states.

The legalisation of adult cannabis use via citizen initiated referendums came a decade later. The arguments that won public support were that cannabis use was less harmful than alcohol, that the criminal law discriminated against minorities, that the costs of enforcing cannabis prohibition were too high, that a regulated legal market would undermine the black market, and that state governments could use cannabis tax income to fund schools and drug prevention programs. 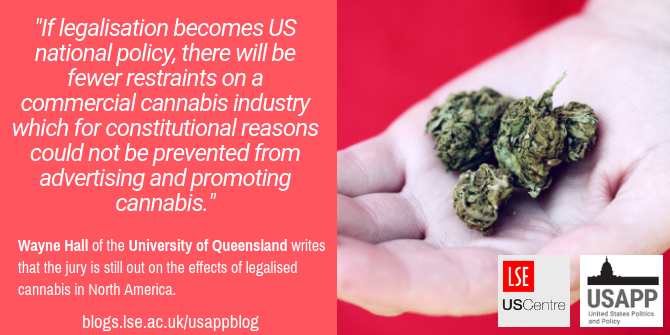 Photo by Sharon McCutcheon on Unsplash

Is cannabis legalisation a good thing?

Legalisation has no doubt been welcomed by adult cannabis users who can now use without fear of arrest, cannabis producers and sellers, and US state governments in need of tax revenue.

Opponents claim that legalisation will increase cannabis use among adolescents. They argue reasonably enough that the use of any commodity will increase, if it is more readily available at a lower price and legal penalties no longer apply. They are especially concerned about the adverse effects of cannabis on developing adolescent brains.

Will increased cannabis use harm users?

One claim is that cannabis legalisation could increase car crashes if more cannabis users drive while impaired. There is debate about the strength of evidence that cannabis impairs driving; studies of the effects of legalisation on impaired driving are also conflicting. All US states that have so far legalised have nonetheless banned driving while impaired by cannabis; the challenge is enforcing these laws.

Cannabis is a drug of dependence. Increasing numbers of users have sought help to stop, including in the Netherlands which decriminalised cannabis use in the 1970s. The risks of developing dependence were lower than those for alcohol, tobacco or heroin in the early 1990s but these risks could increase because more potent cannabis products (e.g. concentrates with 70 percent THC) are available at lower prices in states that have legalised. One may also see amplification of existing social differentials in heavy cannabis use and possibly, cannabis being used for longer among the socially disadvantaged.

The concern that legalisation will increase adolescent cannabis use is understandable. Daily cannabis use in adolescents has been strongly associated with: educational underachievement; poorer mental health; and the use of other illicit drugs. It is difficult to tease out cause and effect because troubled young people are more likely to become regular cannabis users. It is nonetheless likely that regular cannabis use by troubled young people will not improve their well-being and quality of life. The public health challenge will be finding effective ways to prevent regular use among adolescents when adult use is legal.

How will cannabis legalisation affect alcohol and other drug use?

Advocates of legalisation argue that cannabis will serve as a substitute for alcohol and hence legalisation will substantially reduce alcohol-related harm. The alcohol industry campaigned against legalisation in Colorado but now seems more interested in ensuring that cannabis becomes a complement rather than a substitute for alcohol. They are investing in the Canadian cannabis industry and marketing cannabis-based beers. One can foresee them campaigning to allow the sale and use of cannabis in bars.

Advocates of legalisation have used an association between medical cannabis laws and lower rates of opioid overdose deaths in different US states to argue that legalising cannabis use will reduce opioid-related deaths. They thereby interpret a causal association when it favours their case while discounting similar interpretations of the association between regular cannabis use and various poor psychosocial outcomes.

Too soon to say?

There are several reasons why it is premature to draw strong conclusions about the public health and social impacts of legalising cannabis use in the US.

First, the fact that cannabis is illegal under US Federal law has restrained the activities of a legal cannabis industry. Fear of Federal prosecution has limited investment and deterred the alcohol and tobacco industries from entering the market. If legalisation becomes US national policy, there will be fewer restraints on a commercial cannabis industry which for constitutional reasons could not be prevented from advertising and promoting cannabis.

Second, it has taken time for cannabis supply to meet demand from existing users. Cannabis prices have already declined per gram of THC but we can expect to see much larger reductions in prices if cannabis legalisation becomes national US policy.

Third, it may take time for social disapproval of regular cannabis use to change.

For all these reasons one may expect cannabis use to increase slowly after legalisation, as was the case with alcohol use after the repeal of National Alcohol Prohibition in 1932.