Earlier this month, during Senate Judiciary Committee hearings to confirm Justice Brett Kavanaugh to the Supreme Court, Senator Cory Booker of New Jersey released uncleared committee documents. Brian Alexander writes that Booker’s tactics, in combination with the 2016 House sit-in over gun violence show that procedural disobedience is an effective legislative tactic for the minority party that leads to few penalties. With that in mind, he argues that we should expect to see the tactic being deployed more often in Congress in the near future.

On June 12, 2016, the United States was confronted with another horrific gun massacre, this time at a nightclub in Orlando, Florida, resulting in the deaths of 49 people. Meanwhile, in Congress, efforts to advance gun control legislation were stymied by gun rights advocates with the backing of Republican leadership. On Wednesday, June 22, this standstill erupted in confrontation when Democratic members of Congress staged a nearly 26-hour sit-in on the floor of the House of Representatives, demanding action on gun control bills before Congress entered the July 4 recess, grinding breaching rules and grinding formal proceedings to a halt.

The sit-in occurred as a coordinated response by House Democrats over frustration with Republican leadership for not taking up gun control legislation. Shortly after the House convened that Wednesday morning, Georgia Congressman John Lewis, the civil rights icon chosen as the figurehead for the sit-in, offered a floor speech pleading for gun control legislation. Nearly the entire 188-person Democratic caucus participated in the sit-in, including visits from supportive Democratic Senators.  Amid chants of “No bill, no break!” they proclaimed they would not budge until the majority leadership allowed consideration of gun control bills.

Republicans, caught off guard, quickly gaveled out and shut off House television cameras. The protest suspended almost all scheduled legislative business until 1 p.m. the next day and left Republican leadership with few options outside the extreme choice of using the Sergeant at Arms to forcibly restore order. Democrats further violated House rules through the use of mobile phones to broadcast live video of the demonstration on social media. This streaming video was widely picked up by news outlets, shared on social media platforms, and aired in its entirety by C-SPAN. 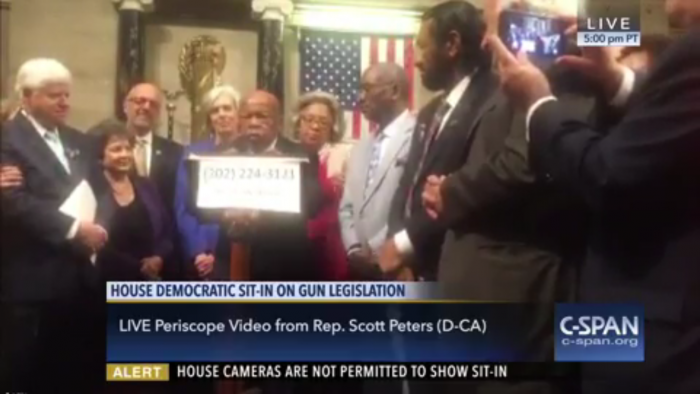 Republicans widely derided the sit-in.  In an interview with me, one observer stated: “There are rules, standards of conduct. Jesus Christ, they’re out there on cell phones, eating pizza, slouching all over the place. It’s like freakin’ Woodstock. It’s bullshit”. Yet no formal sanction was issued against the Democratic protestors.  The main consequence was in the next Congress when House rules were changed to impose a financial penalty on members using recording devices within the chamber.  Rather than illustrating the perils of willful disregard for the rules, the 2016 gun sit-in suggests the potential for the tactics of civil disobedience as a source of minority power in the House of Representatives.

While historically rare, procedural disobedience is not unique to the Democratic sit-in of the last Congress.  Other cases include a Republican takeover of the House chamber during a recess in 2008 to oppose an offshore drilling ban, a 1995 occupation of the House chamber by minority Democrats during a weekend in response to a government shutdown, and a 1968 dispute led by Republicans over televised presidential debates with then-candidate Richard Nixon. What is more, such instances of disruptive, rule-bending behavior have not been met with immediate formal consequences.  The tactic does not appear to have contributed to legislative victories, but other benefits are achieved.  By willfully violating formal rules, a disruptive minority can convey its message to the public, rally its base, and at least temporarily obstruct the agenda of the majority including activity on unrelated legislative business.  These examples suggest that procedural disobedience is an effective legislative tactic of the minority party of the House. 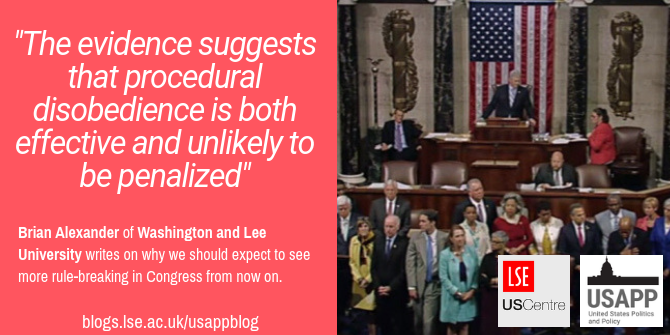 In the Senate, the minority has greater ability within the rules to shape proceedings—most notably the filibuster. Yet even there, we may see a frustrated minority engage the tactic.  A recent confrontation between Democratic Senator Cory Booker of New Jersey and Senate Republican leaders has many hallmarks of procedural disobedience.  During the September 2018 Judiciary Committee hearings for Donald Trump’s nomination to the Supreme Court, Brett Kavanaugh, who is widely opposed by Democrats, Booker released committee documents that may not have been cleared for the public.  In an exchange with Republican Senator John Cornyn of Texas during the hearings Booker stated, “I’m going to release the email about racial profiling and I understand the penalty comes with potential ousting from the Senate.  And if Senator Cornyn believes that I violated Senate rules, I openly invite and accept the consequences of my team releasing that email right now”.

Although the terms of this case are murky due to competing claims over whether the documents were actually secret when Booker released them, Booker’s public statement and apparent intentions closely align with what we expect from procedural disobedience: frustrated members of the minority party willfully violate chamber rules to achieve legislative or political goals.  Regardless of whether Republican leadership follows through with sanctions, the benefits to Booker are already apparent: his stature is raised among the Democratic base who opposes the Kavanaugh nomination; a punishment raises Booker’s profile for standing up to Republicans; a lack of punishment calls Republicans on a bluff.  Like the gun sit-in and other examples from the House, procedural disobedience may be an effective tactic for members of a restive minority party in the Senate. 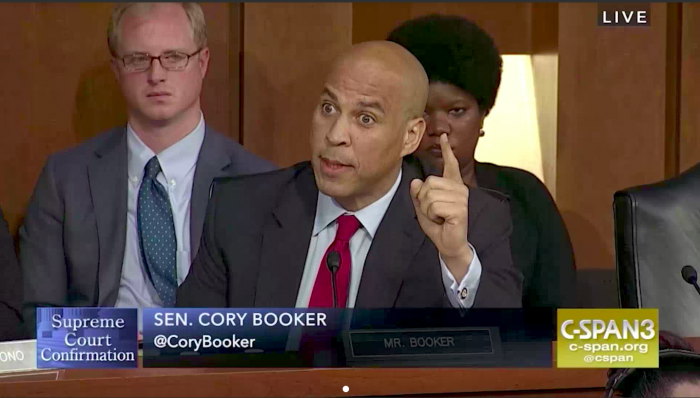 The politics of the gun debate and Supreme Court nomination are unique in many ways, but factors that led to rule-thwarting in each care are endemic to many pressing issues in the modern Congress: polarized public and legislator preferences, mobilization among partisan bases, and a very important issue. Arguably, the strategic logic of congressional decision making supports such demonstrations when a weak minority party sees procedural, policy, and electoral benefits. In other words, in terms of achieving some narrowly defined objectives, procedural disobedience works.

If procedural disobedience provides at least some political or strategic advantages, has historic precedent, and has a relatively minimal threat of sanction, we should ask why it is not used more often by a frustrated, weak minority on issues where polarization is highest.  On the one hand, strategically speaking, there are limited instances when a sufficient number of members would agree upon radically disruptive tactics. Such agreement occurs only where the minority party would find a combination of preference unity, mobilized constituencies, and an important issue. Additionally, if the tactic were used more frequently, the likelihood of formal sanction by the majority would potentially increase—no more allowing the Democrats to “blow off steam,” as one observer described the Republican response to the gun sit-in to me. Moreover, it is plausible that public opinion could backfire against members who repeatedly do not allow the institution to function according to its own rules.

Beyond the strategic, cost-benefit component of norm adherence, it is possible that one part of why  members of the House minority are reluctant to engage more frequently in procedural disobedience is simply because members respect the norms of the institution irrespective of whether or not adhering to them benefits them. Adhering to norms, in this sense, is rooted in a sense of what is appropriate—“fulfilling obligations in a role in a situation” — or what is agreed upon as proscribed or prescribed. For instance, adherence to the norm of courtesy, despite the unlikelihood of punishment for its violation, suggests that members aren’t adhering to norms because it is only good for them. In 2004, Overby and Bell observed that “[as] norms become internalized over a long period they outlive the expiration of purely rational considerations and continue to exercise an influence on behavior even when individual utility concerns may dictate otherwise”.

Just as norms may constrain, they may guide behavior as well. Regarding minority party behavior, in his book, Underdog Politics: The Minority Party in the US House of Representatives, Matthew Green suggests, “[e]xisting norms and practices matter, too: some tactics gradually accrete until they develop a sort of ‘autonomous motivational dynamic,’ done simply because they always have been done and there is an unquestioned faith that they work”.

On the other hand, the evidence suggests that procedural disobedience is both effective and unlikely to be penalized.  Additionally, in today’s highly polarized Congress, the intensity of ideological, strategic, and sometimes personal conflict between Republicans and Democrats is the greatest in recent history, while the minority party in the House is substantially disempowered.  Frustrated minority party members in an era of dogged partisan and ideological conflict may see acts of procedural disobedience as an increasingly effective political tactic.  If this is the case, rule breaking in the US Congress may become a more common feature of an already conflicted era in US politics.

Brian Alexander – Washington and Lee University
Brian Alexander is an Assistant Professor of Politics at Washington and Lee University, where he teaches courses in US government and international relations, combining nearly twenty years professional experience in government and politics with research and academic study. Brian’s research is focused on the U.S. Congress and areas such as legislative norms, parliamentary procedure, and bicameral relations.