What is the best way for law enforcement to deal with crime ‘hot spots’? In recent years, police forces have tended to favor tougher enforcement strategies which proactively focus on the most problematic places. In new research which studies policing strategies in Newark, New Jersey, Eric L. Piza finds that what he calls ‘guardian actions’ such as citizen contacts, business, taxi and bus checks were much more effective at reducing the likelihood of violent crime compared to enforcement actions like arrests and interrogations.

Research conducted during the “Professional Era” of policing (the early to mid-20th century) found that many traditional police activities, such as random patrol and rapid response to 911 calls, had little effect on crime. This led many to conclude that the police were ill equipped to make any meaningful impact on levels of crime. The sentiment towards police has since changed; now there is a great deal of scientific evidence which shows that contemporary police practices can indeed prevent crime. This has occurred due to a large-scale change in the police mission, with proactive strategies being emphasized much more than the reactive strategies that defined the Professional Era. A particular strategy that has amassed a robust record of success is Hot Spots Policing, which involves concentrating crime prevention resources within the most problematic micro-places (e.g. street corners and block faces) rather than evenly distributing resources throughout entire cities or neighborhoods. In 2004, the National Academy of Sciences’ Committee to Review Research on Police Policy and Practices found that interventions at crime hot spots provide the strongest collective evidence on police effectiveness that is now available. A systematic review and meta-analysis by Anthony Braga and colleagues provides further support for Hot Spots Policing.

Somewhat lost in these study findings is the fact that Hot Spots Policing can vary greatly in scope. On one hand, police activity in hot spots can take the form of law enforcement actions such as arrests, summonses, or field interrogations (what is commonly referred to as “stop, question, and frisk”). Conversely, police could affect crime by just being present and informal engagement with residents, relying less on punitive enforcement. Not enough is known regarding which of these types of activities most effectively prevents crime. This is an important gap in the knowledgebase in light of recent events that have caused tension between police and the communities they serve. Given that high levels of law enforcement actions can potentially increase such tensions, policing would benefit from more research on the types of officer actions that most effectively address crime.

To explore this topic, in new research I analyzed the activities of police officers who worked in the Newark, NJ Police Department’s (NPD) Operation Impact, a foot-patrol saturation intervention. On a nightly basis from the summer of 2008 through the summer of 2009, Operation Impact officers patrolled a quarter-square mile area suffering from the most disproportionate levels of violent crime in the city according to internal analyses of the NPD. Official enforcement actions were expected to take place on a frequent basis during the intervention. NPD commanders also recognized that, given their daily presence within the target area, foot patrol officers could (and should) conduct additional activities to combat crime. 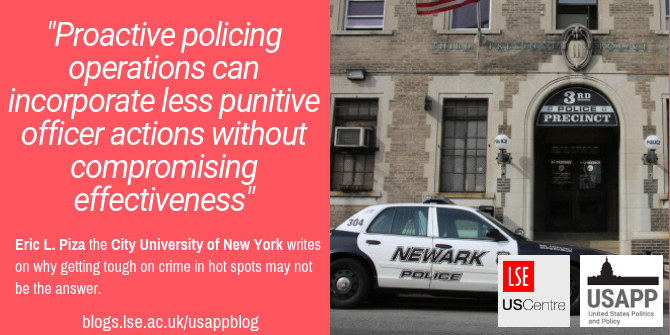 “Newark Third Precinct Police Station” by Paul Sableman is licensed under CC BY 2.0 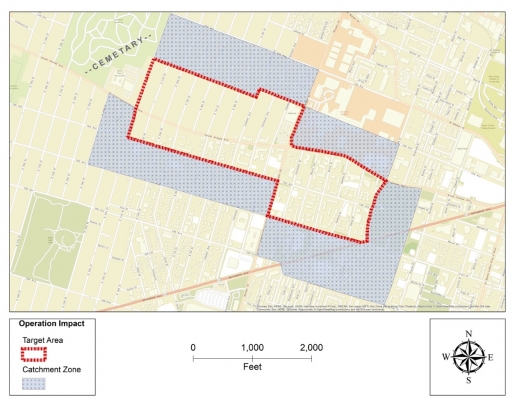 It’s important to note that the study design was not without limitations. For one, the data used in this study is now quite old (2009). This is largely due to data limitations, with the type of guardian actions included in this study not systematically captured in police databases. This required me to collect, code, and digitize hard copies of after-action reports submitted by foot patrol officers, with such reports only available for the Operation Impact intervention. I recommend that researchers replicate this study using updated data sources. While acknowledging these qualifications, I believe this study has important policy implications for contemporary policing. Since the Professional Era, American Policing has been defined by a warrior mindset whereby police view themselves primarily as “crime fighters” with enforcement actions considered the benchmark for measuring officer productivity. My current study adds to the small, but growing, body of research suggesting that proactive policing operations can incorporate less punitive officer actions without compromising effectiveness. Given the potential drawbacks of aggressive enforcement, and the fact that less intrusive actions can generate significant crime control benefits in certain contexts, police should consider more readily incorporating guardian actions into hot spots policing interventions.