Graduates of Ivy League universities like Harvard, Yale, and Princeton dominate American politics. But how do voters feel about their country being run by those educated at these elite institutions? In new research, Carlos X. Lastra-Anadón and Thomas Gift asked survey respondents to rate hypothetical candidates who were randomly assigned an education at either an Ivy or non-Ivy League school. They find that conservatives were less likely to vote for Ivy Leaguers, while liberals were no more or no less likely to support them at the ballot box.

Since 1990, zero presidents have landed in the White House without an Ivy League education. Even Donald Trump, who rails against elites, attended the University of Pennsylvania. And it’s not just the Oval Office. Currently, more than 40 out of 535 members of the 115th Congress hail from Harvard. But do voters actually want it that way? The question is important because it speaks to the views of Americans on elite representation. Yet despite the enormous successes of Ivy League graduates in politics, the answer is far from obvious.

Ivy Leaguers might win elections for lots of reasons, including their proclivity to run for office, other intangible traits they possess, or their membership in high-powered networks. Pundits have no shortage of opinions on whether an elite diploma should be a bonus at the ballot box. On the one hand, FoxNews’s Sean Hannity insists, “I’m not impressed by people’s degrees. Harvard doesn’t impress me, Yale doesn’t impress me, Columbia doesn’t impress me.” On the other, journalist David Ignatius laments that “[i]t’s fashionable with the Sarah Palin set to attack Harvard and treat its graduates as elitists.”

For their part, politicians seem conflicted on whether an elite education actually helps at the ballot box. President Trump has boasted, “I went to the Wharton School of Business. I’m, like, a really smart person.” Republican Sen. Tom Cotton, however, has been criticized by an opponent for “brag[ging] on the fact that he went to Harvard.”

Figuring out what Americans really think about Ivy-League-educated politicians is hard. In real-world elections, lots of moving variables can affect the results. In new research, we offer an answer to this challenge. Our study, conducted through the Harvard Digital Lab for the Social Sciences, involved a unique experiment. We provided citizens across the country with biographies of hypothetical candidates running for governor, and then asked respondents to evaluate them. Unbeknownst to participants, however, we randomly varied where the candidates went to school: either Harvard, Yale, or Princeton, or, alternatively, a set of less-elite schools.

Here’s what we found: Liberals rated elite-educated politicians as more competent. Conservatives deemed them less relatable. As to the crucial issue of ballot box appeal: Liberals were no more or no less inclined to favor elite-educated candidates. Conservatives, however, were significantly less likely to vote for Ivy Leaguers.

What does this all suggest?

One interpretation is that conservatives discount the value of experts in policymaking and view elite universities as bastions of progressivism. As political writer Fred Schwarz has observed, “Unofficially,…the Ivy League, even avant la lettre, has for centuries been a symbol of everything Middle America hates: rich, snobbish, exclusive, Eastern, and too smart for its own good.” 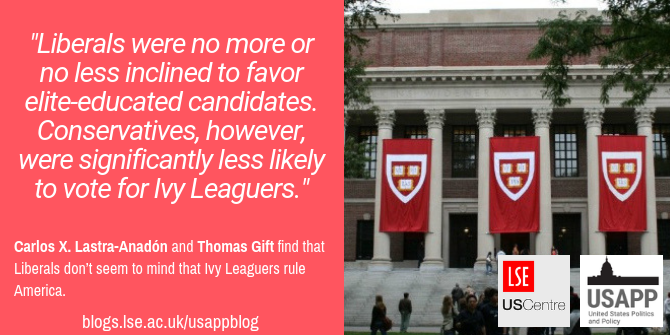 By Joseph Williams (originally posted to Flickr as Harvard) [CC BY 2.0], via Wikimedia Commons.

Liberals, by contrast, may value academic smarts more as a requisite for good governance. They might also think that the prevailing values of elite universities – like diversity, multiculturalism, and social justice – provide graduates of elite schools empathy for ordinary Americans.

These sharply contrasting views may have implications for elite universities to the extent they are concerned that their images differ across “red” and “blue” America. Harvard law professors Jack Goldsmith and Adrian Vermeule, for instance, have complained that “the distinctive progressive ideology of elite universities is relentlessly critical of, to the point of being intolerant of, traditions and moral values widely seen as legitimate in the outside world.”

Additionally, there’s the tactical issue of how and whether politicians will continue to tout – or downplay – their elite educational pedigrees in elections. Some campaign strategists might want to rethink their game-plan for how candidates frame their educational backgrounds. Our results may also reassure politicians lacking an elite diploma that this does not disadvantage them in running for office.

Lastly, the question arises of whether the hyper-credentialed class of politicians that now run Washington and many statehouses across the country are actually more effective. On this, there’s reason for doubt. New York Times columnist David Brooks, for instance, has noted the irony of how universities and other American institutions have become increasingly meritocratic, only to see concomitant declines in trust in government.

If America ultimately elects another Ivy Leaguer to the White House, it won’t be shocking. Yet from the perspective of voters, the evidence seems clear: It will likely be in spite of the candidate’s prestigious diploma, rather than because of it.