Legalised cannabis in North America is still in its honeymoon period. The long term effects may not be so positive.

Legalised cannabis in North America is still in its honeymoon period. The long term effects may not be so positive.

Is the jury out or in on cannabis legalisation in North America? Wayne Hall writes that we only have four years of data from only two US states on the effects of the legalised drug, and that these effects are likely to change radically should the drug be legalised nationwide.

In his recent response to my article on cannabis legalization for this blog, Daniel Bear argues that my analysis of the overall impact of legalisation in the US and North America more widely  focused too much on possible harms (e.g. increased youth use and cannabis dependence) and underemphasized its likely benefits (e.g. decreased arrests for cannabis use, reductions in drug-related crime and new tax revenue for governments to fund other social goods).  He argues that cannabis legalisation has “worked pretty well”.

I agree that legalisation has eliminated arrests for cannabis use and allowed police resources to be better used. It has created a new revenue stream for government to use on other socially desirable programs.  I also see a downside to new tax revenue, namely, that governments may come to depend on it, as many governments have on gambling taxes, which makes them unwilling to regulate cannabis in any way that will reduce the tax revenue that comes largely from daily cannabis users.

My main disagreement is with Bear’s assumption that the short-term effects of cannabis legalisation provide a reliable guide to its longer-term effects. This is unlikely for two reasons. 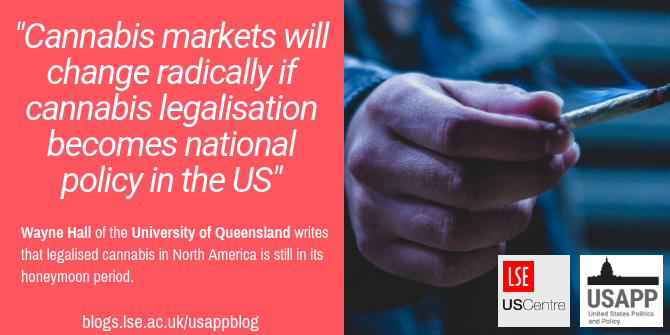 Photo by Cristian S. on Unsplash

First, we have only four years of data from the first two states to legalise, Colorado and Washington, and this has been done while cannabis remained illegal under Federal law, exposing cannabis producers and retailers to the risks of Federal prosecution and putting them on their best behavior.

Second, cannabis markets will change radically if cannabis legalisation becomes national policy in the US. This seems increasingly likely as more US states legalise cannabis (nine states so far and another three likely to do so) and a majority of the US public support legalisation. National legalisation will probably mean the commercialisation of cannabis markets under minimal regulatory restraint. Cannabis production and retail sales will be transformed as the alcohol, tobacco, pharma and biotechnology industries enter the cannabis business, as is now happening in Canada. Commercialisation will make cannabis more available, at much lower prices and in much more potent forms than now. This will include cannabis extracts that contain more than 70 percent THC, which already comprise 20 percent of the cannabis market in some states that have legalised.