Despite the country’s vast food production and exports, millions of Americans go hungry every day. While many are quick to point the finger at poor spending choices, the reality of food insecurity is far more complex, write Kaitland M. Byrd, W. Carson Byrd, Leslie Hossfeld, E. Brook Kelly, and Julia Waity. They argue that as long as those in poverty are blamed for their own hunger, policy change is unlikely. In the meantime, local efforts such as food pantries and community gardens will continue to try to fill the hap and help the undernourished in America.

We have edited and contributed to a new volume of research describing the complexity of food insecurity in the US. What many people may not understand is how this issue is not reducible to a person’s food choices or whether they pursue healthy food options. Unfortunately, the justifications for why more people are battling food insecurity often lands on the people themselves, not the situations they are facing.

Long-held public beliefs and political divisions suggest people in power will use the stereotypes of who is in poverty and who attends college to justify not expanding assistance. Further, they will default to individualistic explanations for inequality. People should make better choices or spend their money more wisely, the argument goes. Yet, this is antithetical to the scholarship on food insecurity and poverty which describes how decisions are not as straightforward because of these difficult situations.

For example, Raphaël Charron-Chénier of Arizona State University points out in the volume that if you are in poverty, you spend nearly a quarter of your household income on purchasing food on top of nearly half of your income on housing, while non-poor families only spend 15 percent on food and about one-third on housing. This impacts black and Latino families the hardest who are also more likely to face poverty in the US Further, impoverished families do not spend their money on food irresponsibly such as going out to eat every day; they simply spend more on buying groceries or “utilitarian food expenses” not on “convenience food expenses.” 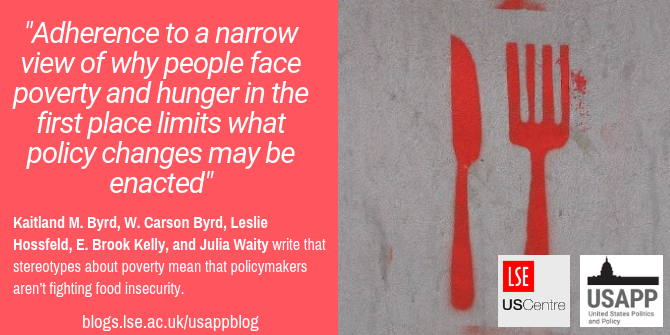 Even couponing is not as helpful as one would think for impoverished families and college students to save money and gain nutrients. As we found in our study of coupons and savings, most coupons are for non-food items, and coupons for food are mostly for heavily processed items requiring people to purchase more units in order to save money. These minor savings with coupons can come at a high health risk and even provide more empty calories that can exacerbate hunger and food insecurity.

Food insecurity can even change how people think about their typical diets, rationalizing going hungry as normal. As college students limit their everyday expenses, many students justify experiences with food insecurity as simply the “typical college diet.” Limiting their expenses and going hungry to work with what funds they have counters recent arguments that most college students are coddled and out-of-touch.

Does that mean these students, like those facing poverty in our communities, are held mostly responsible for going hungry and having more unhealthy food options to choose from? Would that also mean that politicians and policymakers would be slow to pursue policy changes to combat food insecurity?

The short answer is yes, it does.

For over thirty years, research on people’s attitudes notes that a popular perspective places blame for poverty and inequality on an individual’s efforts rather than broader issues they must navigate each day. This view of impoverished people spans the political spectrum and is accentuated by perspectives of race and why racial inequality persists long after the Civil Rights Movement and the election of Barack Obama as president.

The pernicious beliefs of who people in poverty are and what they do with their money echo political ploys of the past that conjure racial stereotypes of the poor, and more recently, use the supposed backwardness of poor rural areas such as Appalachia to argue for limiting public assistance including food-related programming. The policy debates on these issues becomes a narrative of whether political parties support welfare entitlements or personal accountability. This recurring way of framing the issue blames individuals for their hunger and poverty, while the research on these issues is placed in the ideological rearview mirror.

While research can describe the complexity of food insecurity and the struggles facing people with these issues, adherence to a narrow view of why people face poverty and hunger in the first place limits what policy changes may be enacted. The limited policy action is arguably why communities across the country and college campuses are seeing the growth of local food movements to combat these issues.

Many food justice movements are led by those who are stereotyped and used in political arguments to limit food-related assistance. While dominant political arguments and public opinions hinge on individual responsibility for not expanding policies, these local food movements provide evidence of why policymakers should do so: they are expanding community opportunities with limited means.

Urban gardens and markets are increasing in many communities such as Southeast North Carolina, South Florida, and Detroit. On college campuses, food pantries are becoming part of student resources and professors are inserting basic security needs statements on their syllabi to try and tackle the food insecurity facing their students. Imagine what would happen if these communities had more support to tackle these issues.

Until public policy attitudes and common political ploys move from narrow explanations and stereotypes for why a person—a child even—goes hungry, we may see little substantive political movement beyond local efforts to combat food insecurity continuing in the foreseeable future.

Kaitland M. Byrd – Virginia Tech
Kaitland M. Byrd is a lecturer in sociology at Virginia Tech. Dr. Byrd’s work examines the interrelated aspects of food culture and movements, hunger and obesity, and social inequalities. Her current projects include an in-depth study of the influences on barbecue food culture, and the perceptions of and health behaviors related to the myth of the “freshman fifteen” on college campuses.

W. Carson Byrd – University of Louisville
W. Carson Byrd is an associate professor of sociology at the University of Louisville. Dr. Byrd’s research centers on race and educational inequalities, interracial and intraracial relations and their influence on ideologies, as well as the connections among race, science, and knowledge production. These three areas intertwine under a broader research umbrella examining how educational institutions, particularly colleges and universities, can simultaneously operate as centers for social mobility and engines of inequality.

Leslie Hossfeld – Clemson University
Leslie Hossfeld is Dean of the College of Behavioral, Social and Health Sciences and professor of sociology at Clemson University. Dr. Hossfeld’s research examines poverty, health, nutrition, and food insecurity, particularly across the Southeast US This research includes co-leading the USDA SERA-47 Southern Extension Research Activity Learning Community project, where she works to strengthen local and regional food needs and priorities in 13 Southern region states. She focuses on multi-disciplinary strategies and collaborative partnerships to better understand and alleviate persistent poverty in the region.

E. Brooke Kelly – University of North Carolina at Pembroke
E. Brooke Kelly is a professor of sociology at the University of North Carolina at Pembroke. Dr. Kelly has worked with students and community partners on numerous community-based research projects addressing poverty and food insecurity, and her research has maintained a focus on social inequalities, work, and family, with a more recent focus on food insecurity.