Various news outlets and researchers are saying the 2018 midterm elections will be ‘(Another) Year of the Woman’ and Midterm Election coverage continues to focus on women as a key group to watch. Samantha Pettey delves into why researchers expect such big gains by women in 2018 – which may see their representation increase to 25 percent of the US House – and why these increases are likely to be concentrated among Democrats.

Women currently hold a historic high of 20 percent of the seats in Congress. There is hype around this number increasing in the 2018 midterms since a surge of women filed papers and won their primaries. The Center for American Women and Politics (CAWP) has tracked women at many levels of government in the 2018 election environment. Currently, 23 women are running for the 35 available Senate seats, 239 for the 435 seats in the House, 16 in the 36 gubernatorial elections, and 3,381 in 46 state legislatures. CAWP points out that these numbers alone have shattered existing records and provide good reason to expect another Year of the Woman.

When women run, they win, but the race is not always ‘even’

There is a popular saying that ‘when women run, they win.’ Women are no longer at a disadvantage in polls since the probability of success is equal for men and women, all else being equal. To this end, scholars also focus on female candidate emergence— since if emergence increases, success should follow. 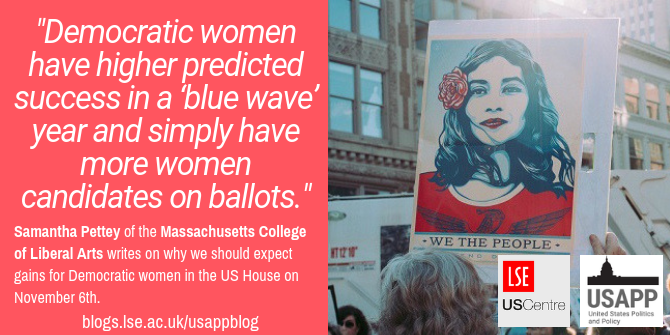 Yet, this notion tends to ignore the uphill battle most female candidates face while trying to attain office. Research suggests stereotypes of women still play a role in voters’ minds during the campaign. My colleagues and I find evidence that voter evaluations of women as leaders varies depending on the voter’s gender, candidate-quality, and gender of the candidate. We argue that looking at both candidates in the race is important and that relative assessment, rather than individual assessment, is a valuable indicator and serves as a cue to voters.

Therefore, depending on who turns out to vote, and the make-up of a given race, women may be perceived as relatively less qualified for office than their competition. And since many women are competing in competitive races in 2018, females may be at a greater disadvantage, even if they are quality candidates. In other words, ‘all else being equal’ is not always an appropriate way to examine races with female candidates.

A closer look at the differences between Female Democrats and Republicans

In the current Congress, about 73 percent of the women are Democrats and only 27 percent are Republican. Further, this trend is likely to continue given the 2018 primary election results favoring Democratic women. CAWP finds that for 2018, Democratic women make up about 65 percent of Senate candidates, 78 percent in the House, 75 percent of Governor candidates, and 71 percent of state legislative candidates. These findings, in combination with generic ballot support for Democrats, lend truth to a Year of the Democratic Woman.

If we look at research on women as candidates and as voters and then take into account the current political environment we can see why it is looking so likely that we will see more women in the US Congress come January 2019.

Using FiveThirtyEight’s Classic forecast model for the House, I examine the likelihood of a woman’s general election success. The Classic model predicts each race by compiling a district’s current polls, historical trends, scandals, past voting patterns, etc. Using data from October 18th (a day after the last Federal Election Commission  filing pre-general), I made a variable with only two categories predicting a very generous measure for chance of success—in this analysis, if a candidate had at least a 20 percent chance to win, they are coded as having a reasonable likelihood of victory while candidates with less than a 20 percent chance are considered very likely to lose.

I examine candidates who ran in open seat primaries and are now running as challengers or in open seats. For example, if someone ran against a sitting incumbent in the party primary they are excluded (This only applies to a few candidates–most are expected to win the general, like Alexandria Ocasio-Cortez,  Ayanna Pressley who is running unopposed). I exclude female incumbents (71 total) since nearly all are also predicted to safely win their seats.

Focusing on open seats and challengers is important since open seats are the best way for women to enter office. Running against incumbents, as a challenger, is hard since incumbents have high success rates. While incumbent success is never guaranteed, as witnessed in this year’s primaries, their likelihood of success is quite high.

As Figure 1 shows, female challengers have a reasonable shot in about 28 percent of the races. This is true for 36 percent of Democratic challengers versus 0 percent for Republican women (this number is also low due to the low number of female Republican challengers). But, as previous research suspects, a majority, or roughly 72 percent, of women are expected to lose as challengers. 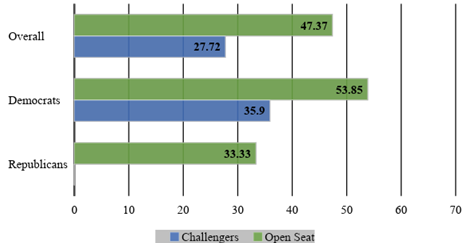 Moving onto the analysis of women running in open seats, nearly 50 percent of women have a chance at victory, ergo the saying ‘when women run, they win’. Yet, partisan differences are quite stark. Republican women have this chance in about 33 percent of their open seat races while Democratic women are predicted to have a shot at winning in about 54 percent of their open seat races. This difference in predicted success will further increase the gap between Democratic and Republican women in office. Especially since the number of female Democratic candidates is considerably higher than Republican females. Democratic women have higher predicted success in a ‘blue wave’ year and simply have more women candidates on ballots.

Given the generous measure of predicted success in my analysis, and while assuming most female incumbents will win reelection, the House could see a modest gain of five percentage points in women’s representation. This would potentially increase female representation in the House for the 116th Congress to about 25 percent. While still low and far from parity, a House with 25 percent of the Representatives as women would be a historic high. Further, the last Year of the Woman in 1992 had longer lasting effects, so the gains in 2018 could potentially be the start of a long lasting positive trend over several election cycles.

October 25th, 2018|Elections and party politics across the US, Making Sense of the Midterms 2018, Samantha Pettey|0 Comments
Previous post Next post