The US Federal Funds rate is the measure which determines interest rates across the US economy – and is therefore a very important tool in economic policy-making. Traditionally, the Federal Reserve has complete independence in determining its policies in this area, but President Trump has undermined this principle with recent comments that the Fed should be more Dovish. Michael Ellington and Costas Milas analyse the recent history of the Federal Funds rate and find that it has actually been too low to stave off inflationary pressures in the economy. They argue that Trump is right to criticize the Federal Reserve – but that his critiques are in the wrong direction.

In a recent tweet (re-tweeted nearly 15,000 times), US President Donald Trump linked the Federal Reserve’s monetary policies to the stock market slowdown by noting that “If the Fed backs off and starts talking a little more Dovish, I think we’re going to be right back to our 2,800 to 2,900 target range that we’ve had for the S&P 500”

This tweet came shortly after an interview with The Wall Street Journal, where Donald Trump renewed his criticism of Federal Reserve Chairman Jerome Powell on the grounds that he “almost looks like he’s happy raising interest rates” when the economy does not really need any interest rate hikes.

Trump’s criticism should be put in an economic context. Current personal consumption expenditures inflation, at 2.2 percent per annum in 2018Q3, is just above the Fed’s 2 percent target and real GDP growth of 3.5 percent per annum in 2018Q3 is above the 3.2 percent average growth rate of the post-World War II period. The issue will undoubtedly become more pressing when the US economy takes a turn for the worse. Indeed, in a fresh interview with The Financial Times, former Federal Chairwoman Janel Yellen noted the following: “think about what is going to happen [with Trump’s criticism] later on as the economy slows”.

Although his direct criticism of Jerome Powell appears to undermine the independence of US monetary policy, the pressing issue is whether Donald Trump is justified in indirectly asking the Federal Reserve to set lower interest rates. 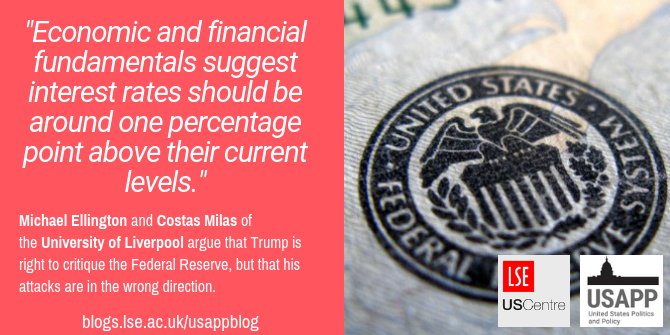 “The Fed” by Richard Cawood is licensed under CC BY NC 2.0

We investigated this issue by relying on so called monetary policy rules initially advocated in 1993 by Professor John Taylor. These rules assess US policy interest rates in terms of economic fundamentals, namely the deviation of US inflation from its 2 percent numerical target and the Congressional Budget Office (CBO) measure of the output gap. A positive (negative) output gap indicates that the economy grows above (below) its potential. If the economy is growing above its potential, then rising inflation becomes more and more likely. Policy rules suggest that monetary policy tightens (in the form of higher interest rates) when inflation rises above the target and/or the output gap is positive.

Noting the valid criticism that models often used in the current literature are not flexible enough to track the changing nature of key economic variables over time, we rely on a sophisticated model to assess whether past and current US monetary policy is consistent with developments in inflation and the output gap (technical details of our model).

Figure 1 plots the US federal funds rate together with the fitted values of two policy rule models. ‘Policy rule 1’ takes into account information provided by US inflation and the output gap. ‘Policy rule 2’ is more open minded, and perhaps more in line with what Donald Trump appears to have in mind, as it considers, in addition to inflation and output gap developments, a broad set of 47 economic and financial indicators. These indicators, which account for the housing market, stock market, money, and corporate and government bond yields, are pooled together in one financial factor. 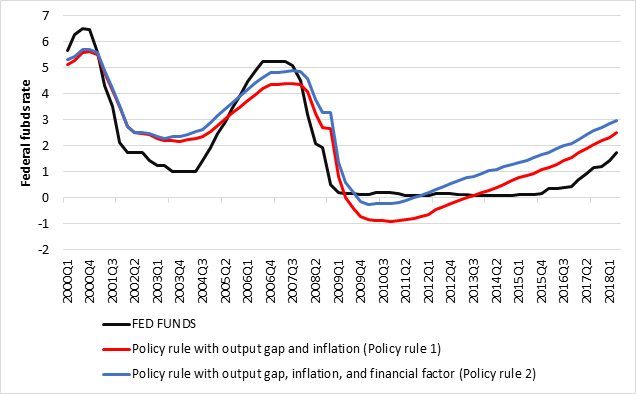 So, what does Figure 1 tell us?

Jerome Powell took office as the 16th Chairman of the Federal Reserve in February 2018. Both policy rules suggest that the US interest rate is below what economic and financial fundamentals seem to suggest. In other words, President Trump should be grateful that Jerome Powell and his colleagues are not tightening even quicker than they currently are!

In his WSJ interview, Donald Trump noted “I’m very unhappy with the Fed because Obama had zero interest rates”. From Figure 1, we see that the open minded ‘Policy rule 2’ suggests that, in order to avoid rising inflation, US monetary policy should have been tighter since 2012. On the other hand, the less open minded ‘Policy rule 1’ suggests tighter monetary policy should have been in place since 2013, that is, one year later. In fact, economic and financial fundamentals suggest interest rates should be around one percentage point above their current levels.

Noting that Barack Obama was a White House resident between January 2009 and January 2017, our results suggest that tight monetary policy with interest rates above zero should have been pursued by the Fed since the second half of Obama’s presidency. With this in mind, it is fair to say that President Trump is correct in ‘complaining’ to the WSJ but for the wrong reasons. Rather than enjoying a long presidency of zero interest rates, Barack Obama’s term of office should have also seen, at least partly, higher interest rates!