The stakes are high for China as it faces structural change and the increasing need to import raw materials, write Roberto Bonfatti and Kevin Hjortshøj O’Rourke.

World trade has increased tremendously in recent decades, driven by the rise of China and other emerging economies. The reliance of world trade on choke points (such as the Strait of Hormuz, the Malacca Strait and the South China Sea) creates the need for someone to guarantee the freedom of navigation. Traditionally, this role has been upheld by the naval hegemon of the day: Britain during the 19th century’s Pax Britannica, and the United States today. While the naval hegemon may in fact be providing a global public good by behaving in this manner, its activities may not always reassure everyone, especially if strategic tensions are gradually building up between itself and rising powers such as China.

Rising tension between the US and China is often analysed in the context of the broader challenge that the rise of China poses to US military hegemony. Political scientists have long cautioned against the risks posed by shifts in relative power. In fact, in the eyes of some theorists, such shifts are the main reason why war can occur. For example, Powell (2006) shows, in the context of a two-country world, that if one of the two countries is catching up militarily on the other, it may be impossible to dissuade the established power from launching a pre-emptive war against the rising power.

This is because from the perspective of the established power, not going to war carries a future cost: in the future, the rising power, having become more powerful, will be better able to impose its will on the established hegemon when it comes to disputes between the two. The follower has an incentive to forestall a pre-emptive war by the leader, by promising the leader a sufficiently big slice of the pie in the future. Since it cannot pre-commit to this, and has an incentive to use its greater power in the future to secure a greater share of the pie, the leader may choose to launch a pre-emptive war in order to lock in a higher share of the spoils while it still has the chance.

Applied to the case of industrial catching up, this model seems to have clear implications. Military power goes hand in hand with growth and industrial development; thus, an established industrial leader should be the one to consider launching a pre-emptive war against a catching-up, late industrialising, follower.

In a recent article we show that, if international trade is taken into account, the implications of the model can be quite different. Central to our analysis are the assumptions that the follower needs to import increasing amounts of raw materials from the rest of the world, as it undergoes structural change, and that the leader may be able to blockade the follower’s trade.

An industrial leader may well be losing out to a catching-up follower in terms of potential military power; however, this does not necessarily imply that it is actually becoming militarily weaker over time. Industrial catching up is a double-edged sword for the follower: while it makes its military apparatus potentially more powerful, rapid growth and structural change also makes it more dependent on imported raw materials. If the leader has the capacity to blockade these imports in case of war, the follower may actually become militarily weaker, rather than stronger, over time. In this case, it may be the follower who launches a pre-emptive war on the leader, and not the other way around.

By generalising the model in this manner, we open up a rich menu of theoretical possibilities. For example, the follower may decide to attack resource-rich peripheral areas in an attempt to become more self-sufficient, or entirely self-sufficient, in raw materials. It may do so instead of, or prior to, launching an attack on the leader. The follower may even attack the resource-rich region in circumstances when it knows that this will provoke an attack upon it by the leader, when otherwise the two countries would not have gone to war.

We argue that our model can shed light on why it was Japan who attacked the United States in 1941, and not the other way around (Barnhart, 1987). This was unambiguously a case of an industrial follower catching up on the leader. And yet Japan was also becoming rapidly more dependent on imported raw materials. Japan’s invasions of resource-rich Manchuria, China, and Southeast Asia were attempts to break free from this pattern of increased dependence: they correspond to attacks on the resource-rich region in our model, prior to an eventual attack on the leader. 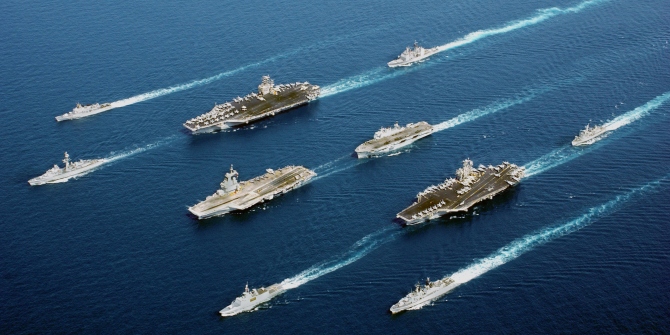 Like Japan, late 19th and early 20th century Germany had been rapidly catching up on the Britain and the United States. However, Germany had also become more dependent on imports of food and raw materials. While we do not argue that this strategic dependence explains the origins of either world war in Europe, Avner Offer (1989) has argued that it was a key factor explaining the Anglo-German naval rivalry which preceded World War I. After World War I, Hitler was obsessed with German dependence on imports of food and strategic raw materials. The importance of securing the resources needed to fight his wars is a constant theme of Adam Tooze’s (2006) classic book on the Nazi economy. One obvious solution was to attack Eastern Europe, which corresponded to the resource-rich peripheral region in our model, even though attacking Poland risked war with the UK and France. And in the long run, conquering Russia was seen as the only way to achieve complete self-sufficiency in raw materials.

Such theoretical and historical considerations suggest that it is Chinese vulnerability, rather than American, that we should be worried about. As long as the United States retains control over maritime choke points, it may be China, rather than the United States, that fears becoming more vulnerable over time. In that context, Chinese expansionism in the South China Sea, while potentially dangerous, may not be so surprising.

Roberto Bonfatti – University of Nottingham
Roberto Bonfatti is an assistant professor at the University of Nottingham’s School of Economics. He holds a PhD in economics from LSE (2010), and BSc in Economics and Finance from Bocconi University. Roberto’s research lies at the intersection of international trade, political economy, and economic history. Among his topics of interest are the relation between trade and the rise and fall of colonial empires; trade and war; the economic legacy of empires, particularly in terms of the international specialisation of former colonies; and the political economy of the natural resource trade.

Kevin Hjortshøj O’Rourke – University of Oxford
Kevin Hjortshøj O’Rourke is the Chichele professor of economic history at All Souls College, University of Oxford, and the research director at CEPR. He is a fellow of the British Academy, a member of the Royal Irish Academy, and a research associate of the NBER. He received his PhD from Harvard in 1989, and has taught at Columbia, Harvard, University College Dublin, Sciences Po Paris and Trinity College Dublin. Kevin’s research lies at the intersection of economic history and international economics, particularly international trade. He has written extensively on the history of globalisation, and his Globalization and History (with Jeffrey G. Williamson) won the 1999 American Association of Publishers/PSP Award for the best scholarly book in economics. His latest book, The Spread of Modern Industry to the Periphery since 1871 (edited also by Jeffrey G. Williamson) was published in 2017.