The 2018 midterm elections were like no other in recent memory: record turnout combined with vitriolic rhetoric from the current occupant of the White House – President Donald Trump. Peter Finn and Robert Ledger write that ahead of the 2020 presidential election, both the Democratic and Republican parties will be taking lessons from their victories and defeats in a country which appears to be at a crossroads more than ever.

For once, it wasn’t all about The Donald. For 12 hours or so (perhaps a few more) after it became clear the Democrats (after winning the popular vote) had taken control of the US House of Representatives whilst the Republicans had solidified their grip on the Senate, it was possible to think beyond the US President and consider US politics without Donald Trump dominating the conversation, if only as an unspoken elephant in the room.

What does this score draw of an election mean for the Democrats and Republicans as we move into 2020 campaign mode? Did it provide any settlement of its leftist-centrist Democratic debate? Have pollsters re-gained credibility? Have the positive losses of Beto O’Rouke in Texas and Andrew Gillum in Florida provided sufficient momentum to launch 2020 presidential bids (and what about so-called Washington outsiders like lawyer Micheal Avenatti and party power-brokers like Senator Elizabeth Warren)? What does all this mean for the Mueller investigation and the potential for impeachment proceedings? Could a bipartisan deal on infrastructure emerge? And were the retiring Republicans who fired missives in Trump’s direction on the way out the door relics of a party that now no longer exists? For his part, Trump claimed victory, played the part of pantomime villain by attacking a CNN journalist, but it felt like he had lost his hold on the narrative.

Then, with the firing of Attorney General Jeff Sessions (continually berated by Trump for recusing himself from oversight of the Mueller Investigation and labelled by the ACLU as the worst Attorney General in recent US history) Trump seized back the narrative. Yet the questions being considered ahead of Sessions’ firing still matter for Republicans, Democrats, and independents alike. And, in our final piece for our Making Sense of the Midterms series, we consider them in order to capture the impact of the 2018 midterms moving forward.

Unlike 2016, the pre-election polls proved accurate in 2018. There were few surprises as Democrats took the House of Representatives with a gain of 40 seats, while Republicans increased their majority in the Senate by two seats. Nevertheless, a closer look at the results of 6 November reveal a number of interesting, sometimes contradictory, trends. In political terms, both parties can point to some level of success.

Unsurprisingly, President Trump quickly moved to claim a great victory in the upper house. Indeed, many Presidents have experienced far worse losses in the midterm immediately after their own ascent to the White House. The Senate electoral timetable, however, worked in the Republicans’ favour and in some respects the Democrats did well to avoid a worse outcome. Although a ‘blue wave’ was predicted by some, later derided as a ‘trickle’ in the election’s aftermath, the Democrats will feel pleased with their gains in the House, which was in the upper reaches of what they hoped. The party defeated the GOP in a number of suburban seats, many of which traditionally vote Republican. Nevertheless, the inability of Democrats to win more state-wide votes, discounting those of either coast and the blue victories of Kyrsten Sinema in Arizona and the re-election of Martin Heinrich in New Mexico, will be of some concern in the run-up to 2020.

The Democrats: a need for a national message with a local focus

Political observers were watching these midterms keenly to see which direction, depending on results, the Democrats might take in 2020. Would the party shift to the left on the back of eye-catching candidates such as Alexandria Ocasio-Cortez and Beto O’Rourke, or would more centrist candidates demonstrate a more moderate approach as the only way to defeat Trump in 2020? As with so much else, the results proved inconclusive.

Nancy Pelosi, likely to re-take the position of Speaker of the House, may feel vindicated by the victory. Long-term Democratic figures can outline a strategy that will appeal outside the base on the coast and big cities. Nevertheless, the momentum within the party may be with less establishment figures. Insurgent candidates such as Beto O’Rourke, who narrowly lost in the Texas Senate race, and Alexandria Osario-Cortez, who won a House seat in New York after defeating a Democratic establishment incumbent in the primaries, have become national figures following the excitement generated by their campaigns. The Senate wins in Nevada – by moderate Jacky Rosen – and Arizona – by one-time Green Party member Sinema – were also big victories. In fact, one of the stories of the midterms was the number of women candidates who won seats for the Democrats, as well as the number of military veterans the party fielded. Anti-Trump indignation is clearly a method to excite the Democrat base and get out the vote. A more positive campaign (a number of candidates backed ‘Medicare for All’ for instance) may be needed to convince less partisan voters. A victory strategy in 2020 will likely combine a national message with local focus. 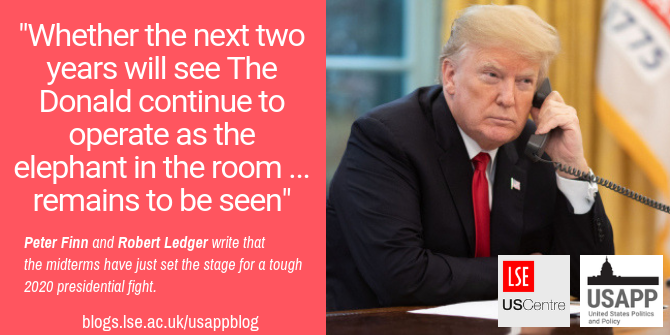 “President Donald J. Trump in the Oval Office” by The White House is Public Domain.

The Republicans: a declining appeal?

The GOP had some success on election night. By increasing their majority in the Senate, the party will have an easier time with confirmation hearings. Moderate Republicans, such as Susan Collins, will have less impact on key votes. A number of commentators see the results as confirmation of a Trump takeover of the party – that the Republicans now occupy far-right or fringe populist positions. This is not entirely true. Mitt Romney, for instance, was elected as Utah’s Senator in his comeback election. Nevertheless, Trump has bolstered his position within the GOP. It remains to be seen if his nativist approach will pay off in 2020 and beyond. Political observers have been predicting for some time that the Republicans face declines going forward unless they can widen their voter appeal. The wins for the Democrats, or close races, in southern states such as Nevada, Arizona, Texas and Florida will likely reinforce these predictions.

The Midterms have shown a country very much at a crossroads. How the President fares in 2020 depends, as always, on events over the next two years. A number of areas could strengthen or weaken his case: the effect of his tax cuts and the economy more generally, whether his approach to trade benefits his supporters and perhaps crucially, whether he can appoint another judge to the Supreme Court. The latter issue has been seen by many conservatives as reason enough to support a man with whom many clearly have little in common.

Trump’s decision to fire Attorney General Jeff Sessions surely brings forward his day of reckoning with the Mueller investigation. A new appointee may try and close down the investigation, in which case a huge furore, if not constitutional crisis, may ensue. Likewise if Mueller publishes a report that suggests the President was involved in serious wrongdoing, the Democratic leadership will come under pressure from its left-wing to initiate impeachment proceedings. Besides this, the Democrats will likely feel emboldened to obstruct Trump and initiate further subpoenas, related to Mueller’s and, as seems likely, return in some way to the House Intelligence Committee investigation into the 2016 election which collapsed amid bi-partisan dispute early this year. This strategy, if the post-1994 or post-2010 Republican tactics are anything to go by, may in fact turn off voters. Then there is foreign policy, an arena a President constrained in domestic politics may feel more uninhibited. In this series, however, Jeremi Suri has argued that the newly divided Congress may provide a check on the President’s ability to conduct foreign policy. Certainly the Trump Presidency is forcing change on other countries, including traditional allies. Influential voices in Europe, for instance, are calling for a more autonomous foreign policy.

A midterm election to remember

The 2018 Midterms generated a significant amount of interest, stretching well beyond the usual politico crowd and causing a spike in turnout compared to recent midterms. In fact, it appears turnout was the highest in a century. The 2016 election of Donald Trump has provoked an unprecedented interest and passion in US politics, with casual observers now able to namecheck candidates in obscure state elections. Whether the next two years will see The Donald continue to operate as the elephant in the room as he has done since launching his presidential bid in June 2015, or whether there will be more moments that see his dominance slip away and open up space for broader conversations remains to be seen. Yet, one thing is certain: whatever transpires in the next two years, the 2020 stakes will be even higher.

November 30th, 2018|Elections and party politics across the US, Making Sense of the Midterms 2018, Peter Finn, Robert Ledger|0 Comments
Previous post Next post