The past two weeks have seen an upheaval in the politics of the Old Dominion State. What began as a disagreement over a late-term abortion bill in the state House of Delegates developed into a scandal for the state’s Democratic Governor, Ralph Northam, after a 1980s yearbook linking him to racist imagery emerged. This has been followed by further accusations of sexual misconduct towards the state’s Lieutenant Governor, Justin Fairfax, and racism on the part of the Attorney General, Mark Herring. Lauren C. Bell writes that the state’s relative lack of legislative professionalism has helped the scandal to unfold as it has and that there is little chance that any of those affected will be removed from office by their legislative colleagues.

It would be hard to imagine a more tumultuous two weeks in politics than what Virginia has just experienced.  It all began with a controversial abortion bill that would have significantly reduced the difficulty of obtaining a late-term abortion in cases of non-viable pregnancies. The bill was tabled in a House of Delegates subcommittee on January 28, but that did not stop opponents from vilifying the Democratic sponsors of the legislation as promoting infanticide and “after-birth” abortion.

On January 30, Governor Ralph Northam, a pediatric neurologist by training, made a regularly-scheduled appearance on a Washington, DC-area radio program to take questions about Virginia government and policy.  When asked about the late-term abortion bill, he called the reaction to it “overblown” and described in medical terms what happens when non-viable fetuses are delivered.  His comments sparked immediate outrage, largely but not exclusively from those to his political right, many of whom alleged that he supported the murder of newborn babies.

A Bad Week Gets Worse

Late Friday afternoon, February 1, Big League Politics, a right-wing politics site, published yearbook photos from Northam’s medical school yearbook page that included a photo of two individuals—one dressed in blackface, and one in a Ku Klux Klan outfit.  The site reported that it was tipped off by a medical school colleague of the Governor’s who was upset over Northam’s abortion comments.

Within a matter of hours, Northam issued a statement of apology.  Calls for his resignation were swift, but not universal.  The next day, however, Northam in a press conference recanted his initial apology and said he did not think he actually was one of the people appearing in the racist photo.  He acknowledged, however, that he had once “darkened his face” to enter a Michael Jackson dance contest—adding that he had won because of his “ability to moonwalk.”  When asked by a reporter whether could still moonwalk, Northam appeared to consider demonstrating, until his wife stepped in to stop him.

Rather than quell the calls for his resignation, Northam’s press conference accelerated them.  Senior members of Virginia’s congressional delegation, including the state’s US Senators, Mark Warner and Tim Kaine, who had resisted calling for his resignation the day before, now joined the chorus of calls for him to quit.  The speculation was that Lieutenant Governor Justin Fairfax would soon be called upon to step in to serve the rest of Northam’s term—possibly as early as Sunday, February 3.

But on Sunday morning, Virginians awoke to the news that Fairfax had been accused of a 2004 sexual assault; overnight, the Lieutenant Governor’s office put out a statement in which he denied the allegations—even before they had been widely reported—and threatened legal action against anyone spreading them.  On Monday, February 4, Fairfax went further, alleging that it was highly suspicious that the assault claims would surface at the precise moment he was being talked about as the next Governor of Virginia. He went on to allege that City of Richmond Mayor Levar Stoney – who may have gubernatorial ambitions of his own – or even Northam himself was behind the news (both quickly denied involvement).

As the politics blog Wonkette noted in summing up the week’s events on February 5, “Everyone in Virginia has lost their damn, moonwalking minds.”

And yet, it wasn’t over yet.  On Wednesday, February 6, Attorney General Mark Herring, the third ranked statewide-elected Democrat holding executive office in Virginia announced that he, too, had once dressed in blackface in 1980.  Coming, as it did, in the wake of the Northam and Fairfax news, Herring’s announcement received a more subdued reaction—but claims that Virginia Democrats are in “crisis,” “chaos,” “turmoil,” abound in the wake of the Herring revelation.

Some political observers have pointed out (mostly tongue-in-cheek, but not entirely) that parliamentary-style democracy would make a response to the madness in Virginia more possible.  Still others have wondered whether Northam (or Fairfax, or Herring) might simply be impeached and removed from office.  But the state constitution makes that difficult, allowing impeachment and removal only for official misconduct and incapacity to govern.    And there are other ways in which the institutional structure of Virginia’s government both contributes to the possibility of scandal and insulates its politicians from the effects.

Virginia is the only state in the union that allows its governor to serve just a single term of four years, and its General Assembly sessions are among the shortest in the country.  The most recent iteration of the Squire Index of legislative professionalism ranks Virginia 33rd out of 50 states.  The combination of short General Assembly sessions (30 days in even-numbered years and 60 days in odd-numbered years) and citizen legislators means that the political class is not as well developed in Richmond as it is in many other states.  Members of the General Assembly, and even lieutenant governors—the post Northam held for four years from January 2014 until January 2018—almost always maintain another, regular job on the side by necessity, since state legislators make just $18,000 per year.  There are fewer political consultants, lobbyists, and staff in Virginia than there are in other state capitals.

Northam’s radio show comments reflected this citizen-governor reality; when asked a fraught political question, his response was steeped in his medical background and not measured against the likely political impact. 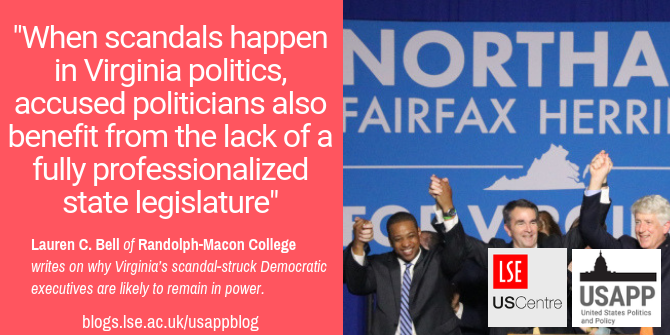 Furthermore, when scandals happen in Virginia politics, accused politicians also benefit from the lack of a fully professionalized state legislature.  Short General Assembly sessions mean that state legislators have virtually no time to devote to engaging with these scandals in a substantive way.  Indeed, this week was also “crossover,” the halfway point of the legislative session, and the deadline for each chamber to approve legislation and send it to the other chamber.  So, while scandals blazed in the executive branch, the legislative branch continued its work apace.

As much as anything else, the events of the last two weeks have shattered Virginians’ collective sense of political identity.  As the New York Times pointed out in 2014, “The Old Dominion—a commonwealth, as people here are quick to point out, not a state — has for centuries fancied itself a haven of good government led by public-spirited citizens dating to Patrick Henry and Thomas Jefferson.”

Virginia’s political culture and the Democratic Party’s relatively new “zero-tolerance” position on accusations of racism and sexual misconduct has amplified the hand-wringing over political scandals, while the state’s constitution and the time constraints binding the General Assembly both serve to limit the institutional prospects for removal of any of these men from office.  There is also far less incentive for the Democratic Party of Virginia to use partisan mechanisms to push any of these officeholders out now that all have been tainted by scandal.  If Northam, Fairfax, and Herring resign en masse, Republican House Speaker Kirk Cox is next in line to serve as Governor.

As talk turned to the line of succession, speculation swirled that the most likely outcome would be that the three embattled politicians might orchestrate an exit; if Fairfax or Herring were to resign ahead of Northam, the state constitution would seem to allow Northam to fill their place with an uncontroversial Democrat before he himself resigned.  But any such action which itself would likely be contested in the courts.  And with Fairfax accusing Northam of releasing information about the sexual assault allegation, and Herring throwing Northam under the bus for the yearbook photo (even as he knew that he himself had appeared in blackface) there’s not a lot of love lost between or among the three members of Virginia’s executive branch right now.

As CNN (and former Richmond NBC affiliate) political reporter Ryan Nobles tweeted: “…the sum total of these three monster scandals in a short window of time means the most likely scenario is that they all stay in power.”

Unless there are forthcoming revelations that are equally or more damaging (and, really, anything seems possible in Virginia right now) Nobles is most likely right in the short term.  But with General Assembly elections just a year away, and less than a year until the primary season begins for the 2020 presidential election, it remains to be seen what the longer-term impacts might be.