Although some critics have floated the idea of impeaching Donald Trump, Democratic leadership in the House of Representatives has so far muted such calls. Some analysis, however, suggests that if Trump declares a national emergency to build a border wall with Mexico, it would constitute an impeachable offense. Thomas Gift examines how conversations over impeachment could change if Trump issues an emergency declaration. He argues that while Democrats would still be reluctant to pursue impeachment, it could make impeachment more likely in the future depending on the outcome of other investigations, including the Mueller probe.

Investigations into President Donald Trump are ratcheting up under the new Democratic-controlled House of Representatives. Combined with the soon-to-be released Mueller report looking into alleged collusion with Russia, Trump is feeling pressure from multiple angles.

If there’s a smoking gun in any of these probes, Democrats will be obliged to follow the fact pattern, wherever it might take them. This could lead to a vote to impeach the President by the House — and perhaps even ouster from office by the Senate if enough Republicans turn against the president.

Yet when it comes to impeachment, one point to keep in mind right now doesn’t have to do with the usual Trumpian ignominies: Russia, tax returns, or any of the president’s past actions. Rather, it concerns the issue of the moment in national politics: the US-Mexico border wall.

While as of 11 February, it looks as if congressional Democrats and Republicans have agreed to avert another government shutdown, the deal allocates far less – $1.4 billion – to border security than the nearly $5.7 billon Trump had demanded for his wall. In reaction to the deal, Trump reportedly said at an El Paso rally on Monday night: “Just so you know, we’re building the wall anyway.”

If Trump still takes the brash maneuver of declaring a national emergency in an effort to build the wall that he wants — even in the face of Democratic opposition, murmurings of backlash within his own party, and serious criticism about the legality of such an act — some say it would provide grounds for impeachment.

Harvard Law School professor Noah Feldman, for instance, argues that declaring a national emergency over unauthorized immigration “would constitute a high crime and misdemeanor qualifying him for impeachment.”

Frank Bowman, author of High Crimes & Misdemeanors: A History of Impeachment for the Age of Trump, claims that Trump pursuing the national emergency tactic “could constitute part of a larger pattern of impeachable conduct.” 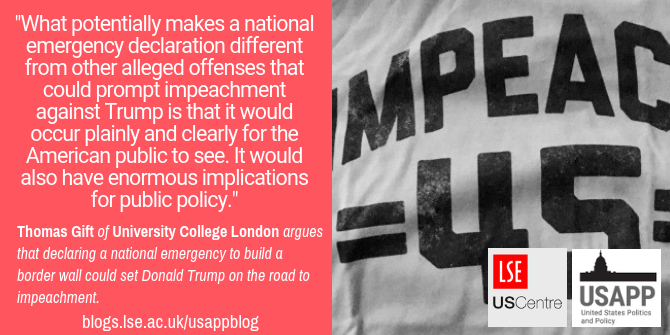 So far, Democrats have exercised restraint on impeachment, but it’s unclear whether Trump declaring a national emergency would change their position. To this point, there’s been an understanding among House Speaker Nancy Pelosi and her colleagues on Capitol Hill that impeachment could backfire.

For one thing, Trump’s base would likely interpret such a move as a political hit, which could further galvanize Republicans to turn out to the polls in 2020. Despite recent dips in Trump’s favorability numbers, the president’s followers aren’t a force that Democrats want to activate, especially with a general election on the horizon.

In addition, even moderate voters might view the move as a sidetrack from more important priorities: passing legislation on prescription drugs, infrastructure, and so on. In 2018, Democrats promised to roll up their sleeves and work for the American people. Impeachment might strike some as mere political retribution.

What potentially makes a national emergency declaration different from other alleged offenses that could prompt impeachment against Trump is that it would occur plainly and clearly for the American public to see. It would also have enormous implications for public policy.

The elephant in the room, however, is that there’s no uniform consensus that declaring a national emergency would be unlawful. Jonathan Turley, a professor of law at The George Washington University, insists that “an emergency declaration to build the wall is unwise and unnecessary. However, the declaration is not unconstitutional.”

Similarly, according to Elizabeth Goitein, co-director of the Liberty and National Security Program at the Brennan Center for Justice, “Declaring a national emergency to build the wall would be an abuse of emergency powers. But Congress left the door wide open to this abuse by giving the president complete discretion to declare a national emergency.”

A united House majority would have the numbers to impeach the president if he issued an emergency declaration. By itself, however, that wouldn’t lead to Trump’s ouster. It seems implausible that two-thirds of the GOP-controlled Senate would support removing Trump from office. Indeed, some Republicans like South Carolina Senator Lindsey Graham even seem to be encouraging him on the wall.

What’s more likely to happen if Trump declares a national emergency is that it fosters a latent groundswell in favor of impeachment. If details emerge from the Mueller report (or other investigations) that are less than favorable to the president, it makes eventual impeachment more probable than it would have otherwise been.

Despite indictments of several of Trump’s allies, Democrats are still searching for unassailable evidence that the president knowingly conspired with Russia during the 2016 election. Even absent such proof, however, circumstantial evidence in that case might be enough to cause Democrats to vote to impeach Trump if resentment from him declaring a national emergency festers.

Daniel Drezner, a professor at Tufts University’s Fletcher School of Law and Diplomacy, says that “so long as Trump is president, impeachment will be part of the conversation.” If Trump declares a national emergency, don’t look for Democrats to pursue impeachment immediately. But do look for it to move the needle in that direction.