This week an evidentiary hearing began in the North Carolina state capital over allegations of election fraud in last November’s US House election for the 9th District. Mary Jo Shepherd writes that the apparent ‘harvesting’ of absentee by mail ballots by a Republican campaign consultant may have been spotted and dealt with had the election directors in the local state Board of Election been better resourced.

An evidentiary hearing began this week in North Carolina’s state capital, Raleigh, over the state’s Ninth Congressional District election fraud scandal.  In November, Republican Mark Harris narrowly defeated Democrat Dan McCready by 905 votes to win the US Congressional seat.  Later in November, the state Board of Elections refused to certify that race due to allegations of ‘election irregularities’.  For the last three months, the North Carolina State Board of Elections (NCSBE) has been investigating what happened.  This past Monday marks the first day of testimony to uncover what happened.

An election operative, McCrae Dowless, is accused of ‘harvesting’ absentee-by-mail votes which is illegal in North Carolina.  Harvesting involves collecting absentee-by-mail ballots from citizens and subsequently altering or destroying the ballot.  Additionally Dowless allegedly requested absentee ballots on behalf of unknowing citizens.  The end goal is to change the outcome of an election by manipulating absentee-by-mail votes.   Andy Yates, a campaign consultant who works for Red Dome Group, hired Dowless.  The Red Dome Group is a consulting group hired by Mark Harris’ Republican campaign.  During the course of this hearing we expect to learn exactly what Mr. Dowless allegedly did with ballots and if Mr. Yates or Dr. Harris knew about Mr. Dowless’ alleged activities.

The underlying problem in this case involves the administration of elections in North Carolina.  This case involves not only how voters send in their absentee-by-mail ballots but also the way they are collected and managed by the county boards of elections.  Each county in North Carolina has its own board of elections that runs the county’s elections and hires its own election director and staff.  For example, each county Board of Elections (BOE) choses what type of election equipment they purchase, what type of ballot to use, and maintains the voter registration roles for their county.  They have wide discretion in some matters while the State of North Carolina’s Board of Elections (NCSBE) controls the election rules and process.  The NCSBE is governed by a board appointed by the governor.  The board’s members come from the state’s two largest political parties with no one party having more than three members on the five-person board.  Currently the NCSBE is made up of three Democrats and two Republicans.  The NCSBE has rules surrounding absentee-by-mail ballots such as requiring two witnesses to your signature on your ballot or having the ballot notarized.  The rules are adequate, but elections officials assume that citizens know the rules and abide by them.  Citizens assume that the county boards of election have the capacity to enforce the rules. 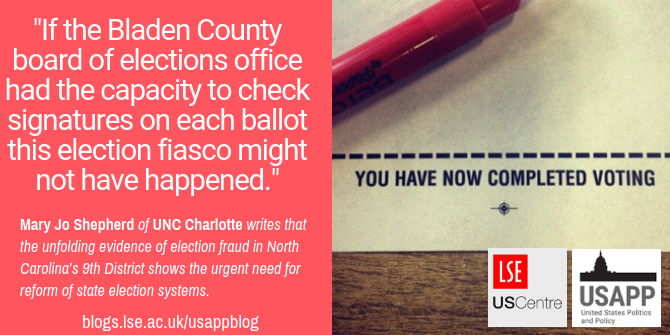 “Absentee ballot, submitted” by kaythaney is licensed under CC BY 2.0

Current research indicates that the directors of each county’s board of elections have different levels of capacity to manage these processes.   Election administration scholars recognize that administrative capacity of local election offices affects the ability of the jurisdiction to operate an election.   Is there someone at the county BOE checking that the absentee-by-mail signatures are valid?  Is there anyone tabulating how many absentee-by-mail ballots are notarized by any one notary or signed by the same witness?  This appears to be one of the main problem areas for the District 9 election fraud scandal.  The BOE’s put the burden of complying with the ballot rules on the voter.  Assuming that voters are honest and there are no bad actors, this system has worked well for decades.  We can no longer assume that bad actors will not attempt to manipulate elections.

Dowless’ alleged actions constitute a wholesale election fraud.  He allegedly schemed, hired, and attempted to cover up a large-scale collection of ballots in order to ensure a specific electoral outcome.  What if this had been the Russian government instead of an allegedly corrupt local actor?  With no mechanism at the boards of elections to verify signatures or notary stamps on ballots, the absentee-by-mail process can be easily corrupted.  County Boards of Election vary in their ability to professionally manage their offices and administer their responsibilities. It is not a stretch to understand that election directors with low capacity to operate their offices also have little capacity to catch election fraud.  The job of the election director is to print ballots, buy election equipment, and register voters.  Little time and resources are left over in an already slim budget to check every single absentee-by-mail ballot to make sure the same witness isn’t signing multiple ballots.

Based on the testimony from one day at the 9th District election fraud hearing – one individual witnessing multiple ballots is exactly the type of fraud that has thrown the 9th District race into question.  If the Bladen County board of elections office had the capacity to check signatures on each ballot this election fiasco might not have happened.  Clearly, the state needs better systems and processes in place to prevent this from happening again.  Regardless of the outcome of the evidentiary hearing, the next step is to consider what types of reform will prevent it from reoccuring.