Many politicians use the rhetoric of open government, but operate with a lack of transparency. Ben Worthy and Marlen Heide consider the Trump presidency in these terms, and find that, for all the lies, there is also an unintentional openness – and it is not yet clear which of these tendencies will weaken the presidency most.

Most politicians promise to be more open than their predecessors. But once in office, their outlook changes. They find themselves caught between the pressure to be open and the siren-call of secrecy. The conventional wisdom is that politicians rapidly fall out of love with transparency and its potential for exposure, uncertainty and unpleasant surprises. Obama is a case in point, as he went from executive orders promising a new era of openness to prosecuting more leakers than every other administration in US history before finally pardoning Chelsea Manning on his way out of the door.

Michael Wolff’s book Fire and Fury described how Trump has been both secretive and open at the same time: we have never known, simultaneously so much or so little about what a president has been doing and thinking. As Clare Birchall points out, he challenges some of our ideas about what being ‘open’ and ‘closed’ actually means.

Most presidents have hidden, or at least tried to hide, something. From Kennedy’s and Clinton’s philandering to Nixon’s bombing, everyone in the White House seems to have had something they wanted buried. Woodrow’s Wilson’s incapacitating illness was covered up so completely in 1919 that no one knew that his wife (a direct descendent of Pocahontas, no less) was acting President for more than year.

Yet no president has come to power with as many secrets as Trump. Perhaps Bill Clinton was his direct inspiration, with his constant dissembling and cover ups. In 2016 Trump refused to release his tax returns, while his medical report was written ‘in a few minutes’ (probably by Trump himself). Non-disclosure agreements abound in his business affairs and in the White House. There are also claims of ‘Catch and kill’ operations at major publications to bury stories about him, which have lately dragged in Amazon’s Jeff Bezos.

As President, Trump has issued secrecy waivers for lobbyists and refused to release White House visitor logs. His advisor daughter, inspired by ‘Crooked Hillary’, appears to have been using private email for public business. Trump’s only important mention of ‘transparency’ seems to be in reference to his border wall, which needs to be ‘transparent’. Here’s the full quote:

One of the things with the wall is you need transparency. You have to be able to see through it…And I’ll give you an example. As horrible as it sounds, when they throw the large sacks of drugs over, and if you have people on the other side of the wall, you don’t see them – they hit you on the head with 60 pounds of stuff? It’s over.

But what is it that Trump fears? Luke Harding’s book Collusion paints an extraordinary picture, in every sense of the word, of connections and conspiracy so vast that they are hard to believe and difficult to fathom. There appears to be a deep, twisted and toxic set of connections to Russia spanning decades and covering everything from Trump’s money to his cabinet picks. These begin with Soviet (and then Russian) intelligence overtures to Trump since the late 1980s, possibly involving compromising material. These are then overlaid with proposed business deals in the 1990s, the bailing out of Trump via Deutsche Bank and finally the infamous alleged meetings over leaks in 2016. The infamous Steele dossier, which is in a sense a raw intelligence statement rather than finished product, may be the bombshell hiding in plain sight. As Sarah Grant and Chuck Rosenberg explain :

The Mueller investigation has clearly produced public records that confirm pieces of the dossier. And even where the details are not exact, the general thrust of Steele’s reporting seems credible in light of what we now know.

Though large parts are not confirmed it has ‘held up well’. Wolff claims that there are other (worse) secrets hidden in their accounts.

While much of this remains circumstantial, Trump’s behaviour with Putin is certainly bizarre and, in national security terms, downright dangerous. When meeting Putin in late 2018, Trump had no note taker of his own and confiscated his interpreter’s notes. As this article points out:

President Trump has gone to extraordinary lengths to conceal details of his conversations with Putin, including on at least one occasion taking possession of the notes of his own interpreter and instructing the linguist not to discuss what had transpired with other administration officials.

This means that ‘there is no detailed record, even in classified files, of Trump’s face-to-face interactions with the Russian leader at five locations over the past two years’.

Yet, as the Wolff book points out, Trump’s White House is also oddly transparent and open, partly by intent and partly by accident. Trump committed to be, as Mark Fenster calls it, ‘morally open’ to the American people and, whichever way you read that, it is true. You do not need to search beyond Trump’s own Twitter account to know almost everything that the current President is thinking (and, interestingly, all those tweets are covered under the Presidential Records Act). Trump spectacularly demonstrated the power of the President to ‘declassify at will’ when he (accidentally? purposely?) disclosed sensitive Israeli intelligence on ISIS to Russia. He has also allowed cameras to film cabinet meetings and, more infamously, a meeting with Nancy Pelosi, which she branded her ‘skunk tickling’ clash. His declaration of a border emergency, and his admission that he ‘didn’t need to do it’, was part of Trump’s ‘honesty’ or his inability to understand that a politician needs to discriminate between their public (stated) and private (actual) motives: he is open because he is ‘undisciplined in his lack of hypocrisy’.

Part of this openness is accidental. For all the NDAs, this is by far the leakiest administration in modern history, with a stream of leaks opening up everything from Trump’s private life and racist views to the planning and chaos at the heart of government. A constant flow of memoirs have given us all sorts of details, including the fact that officials discussed using the 25th amendment to remove Trump in 2017. Bombshell leaks about everything are becoming the norm. Only in January 2019 did we discover that Trump was being investigated by his own FBI as a national security threat. It’s hard to imagine how the press and public would have reacted to such a revelation about Obama. Wolff claims that the biggest leaker, the super-leaker, is Donald J. Trump himself, who spends his evenings ranting to his billionaire friends on the phone. 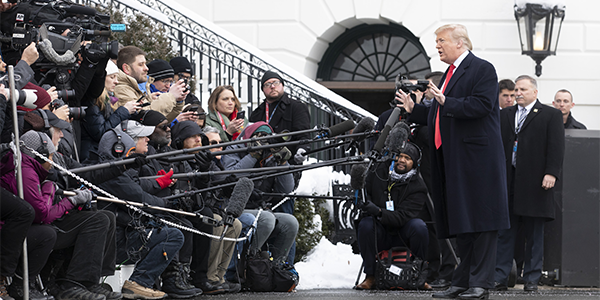 Trump also has a remarkable ability to encourage greater openness pressure by his own actions, in what is commonly known as the ‘Streisand effect’. His rants and attacks have attracted the attention of the media and opponents and played an important part in the many ongoing investigations from the intelligence agencies (some of who he has insulted and sacked) and Congress (who he has raved about regularly).

Wolff’s book mentions that, among Trump’s many odd fixations, is an obsession with John W. Dean. He was Nixon’s White House Counsel who, fearing he was to be made the Watergate scapegoat, co-operated and gave evidence to the investigating committee in a blaze of damning publicity. Why, you may wonder, would Trump fixate upon someone with knowledge of something turning against him and going public?

The question is whether it will be Trump’s secrets or his openness that end his presidency. Amidst all this hyper-modern post-truth politics, Mueller’s investigation appears oddly old fashioned, patiently following the oft-repeated dictum to ‘follow the money’ and Robert Caro’s instruction to ‘turn every page’. The investigation is fundamentally about Russia, not Trump, but from what little can be gleaned, Mueller is quietly, privately and patiently assembling fragments and pieces to tell a devastating story. We still know little about what’s happening, but it may be that Trump’s collusion and obstruction are the same thing. Just like Clinton’s Whitewater investigation, no one knows quite where such patient, legalistic processes can lead and what they can reveal.

As publication is imminent, there’s now another transparency battle looming, as, legally speaking, the Attorney General does not have to release the report to Congress or the public. The new Attorney General, William Barr, promised repeatedly to abide with the procedures for sharing Mueller’s findings, but they do not obligate him to do anything except inform the public and Congress Mueller’s investigation is complete. That’s not to say, however, that Mueller’s report won’t be the most leakable document since the Steele report.

So far, documents have been the key. Whatever ‘thing’ happened, it needs to have been written down or recorded. So far, remember, Mueller was triggered by James Comey’s contemporary notes of his meeting with Trump. Flynn was caught out on intelligence recordings. Trump’s lawyer appeared to have been recording their conversations. Though you would assume care would be taken, Donald Trump Jr’s publishing of his emails shows there is a trail and Trump’s odd ‘recording’ tweet seemed to hint, with shades of Nixon, at some sort of taping system.

Records are at the heart of any good openness regime, and are normally behind any big scandal. Remember, Nixon was caught by his own recordings, not the allegations. For all his claims of being new or different, whether Trump stays or goes may depend very much on the age-old question of whether someone wrote it down or pressed record.