In nearly half of US states, voters are able to directly influence state budgets through the ballot initiative process. In new research, Jeff Cummins examines what drives ballot box budgeting in California, finding that while divided government means more budget related initiatives, it makes tax cut measures less likely as legislators who are otherwise at loggerheads can generally agree on tax cuts. By contrast, when state budgets are healthier, tax cut initiatives from interest groups are more likely since legislators prefer spending on their constituents.

Over the last several decades, voters in California and other states have made some significant budgetary decisions at the ballot box. Instead of the normal, deliberative budget process, where legislators take testimony from agency officials and other experts and negotiate the final contents with the governor, voters get a chance to weigh in on fiscal decisions that may have enormous consequences. This ballot-box budgeting, as it is known, has led to a dual-track budgeting process where legislators and the governor make the vast majority of budgetary decisions, but voters also make what are considered to be some of the most important ones as well.

California is often regarded as ground zero in the ballot-box budgeting phenomenon because of the passage of Proposition 13 in 1978 (which capped property taxes) and the renewed interest in the initiative process. However, budgeting through direct democracy is not unique to California and the other 23 states with an initiative process. Nearly all states allow voters to weigh in on budgetary matters because bonds or constitutional amendments must be referred to voters in these states. Combining both initiatives and legislative measures from the 2016 general election, voters in 26 states saw a total of 59 budget-related ballot measures, according to the National Conference of State Legislatures ballot measure database.

While some direct democracy advocates applaud voter participation in government budgeting, it places constraints on state policymakers’ attempts to finalize taxes and spending each year, especially during tough budgetary times, and locks future generations into the priorities set by previous generations. Throughout the 2000s, California teetered on the brink of insolvency and was compared to Greece and other European nations experiencing severe financial problems. Ballot-box budgeting was commonly viewed as a significant contributor to these problems in California.

In our research, we examined the factors that led to ballot-box budgeting in California and found that divided government, where one party controls the executive branch and the other party controls the legislative branch, and party polarization played significant roles in the frequency of budget-related measures on the ballot. We specifically looked at initiatives that either earmark revenues for a certain policy area or cut taxes. Both of these types of measures fall under the umbrella of ballot-box budgeting because they limit how policymakers can allocate state revenue. Funding dedicated to one area by a ballot measure cannot be spent elsewhere, while tax cuts reduce revenue which in turn constrains how much money can be spent.

Somewhat surprisingly we found that divided government and party polarization affect earmarks and tax cuts in opposite ways. We had assumed that both factors would boost the number of budget-related measures on the ballot because they increase the likelihood of gridlock. Policy advocates, deterred from the normal legislative process, would then circumvent the legislature by going to the ballot box. This logic seems to play out for initiative earmarks, but not for tax cut measures. 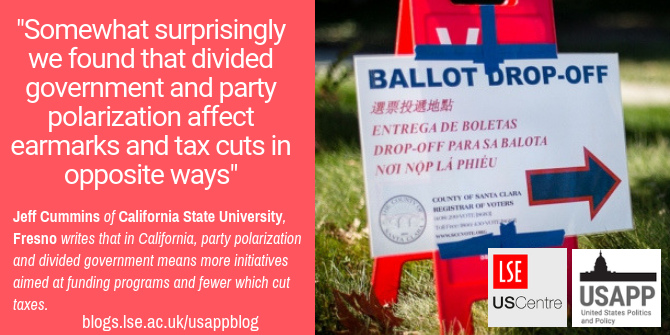 “Ballot Drop Off – Mayfield” by hjl is licensed under CC BY NC 2.0

For policy advocates seeking funding for their programs, a gridlocked legislature is unlikely to satisfy their funding demands. Democrats and Republicans in the legislature, and the governor, are likely to have different ideas about the spending levels for different programs and polarization between the parties exacerbates these disagreements. Thus, the initiative process is an attractive pathway for advocates to secure funding. This is the pathway that led to Proposition 98 in 1988, one of the most significant initiatives in California history. It carved out nearly half of the state budget for K-12 programs.

Tax cuts, on the other hand, are a different story. Both Democrats and Republicans like tax cuts because they are popular with voters and they can pad the resume of publicity-seeking politicians. In a gridlocked legislature, where little productivity is expected, tax cuts are an area where legislators can find agreement. Policymakers, seeking compromises that they can advertise to the public, can find agreement on tax cuts, preempting the need for advocates to bypass the legislature and use the initiative process.

The explanation for the different effects on initiatives that either earmark revenue or cut taxes is reinforced with our findings on the impact of budget conditions on initiative frequency. When budget conditions are more positive, where revenue is flowing into state coffers, the number of initiative earmarks goes down. Policy advocates are more satisfied with the allocation to their programs and the need to do an end-run around the legislature is reduced. In contrast, our results show that healthier budgets lead to more initiatives for tax cuts. Surging revenue signals to tax cut advocates that rates are too high and that those “hard-earned tax dollars” should be returned to taxpayers. However, legislators are reluctant to grant them under these circumstances because they need the additional revenue to satisfy spending advocates and to send pork home to their districts. Stronger budgets present the opportunity for legislators to shower their supporters and constituents with spending-driven benefits that they can then tout on the campaign trail.

Recent research had downplayed the role of divided government as a contributor to initiative use in favor of an explanation that emphasized the role of pivotal legislators in driving the number of initiatives. Pivotal legislators occupy key “pivot points” along the ideological spectrum in a legislative body that could block or pass legislation, such as a legislator who represents the final vote to override an executive veto. We explored both explanations and found support for both.

Ironically, while ballot-box budgeting constrained the options available to policymakers, thus prolonging California’s budget woes in the 2000s, it also rescued the state in 2012. After Governor Jerry Brown ran into gridlock while trying to negotiate a tax increase with legislative Republicans that would have helped to balance the budget, he turned to the initiative process to get the job done. Proposition 30, which increased income and sales taxes, passed and helped keep the state afloat.

Jeff Cummins – California State University, Fresno
Jeff Cummins is Professor of Political Science at California State University, Fresno. He is the author of Boom and Bust: The Politics of the California Budget and co-author of California: The Politics of Diversity. He previously worked for the Legislative Analyst’s Office in Sacramento, where he served as a budgetary adviser to the legislature. His work focuses on state budgeting, term limits, and electoral accountability and has appeared in such journals as Social Science Quarterly, State Politics and Policy Quarterly, and American Politics Research.