Heading into the 2020 presidential election, many policy debates surround measures which would help to address economic insecurity, such as Medicare-for-All and higher minimum wage laws. In new research, Mallory E. Compton and Christine S. Lipsmeyer look into what drives voters to support more government spending on one such policy – unemployment insurance. They find that when the economy as a whole is bad, people support greater spending, no matter their own circumstances. On the other side of the coin, when government social programs are less comprehensive – as is the case in the US – support for such measures is driven by people’s own individual circumstances.

Economic insecurity is rising in the US, and that’s a problem. It’s an important issue not only because it has detrimental effects on personal health and wellbeing, but also because research shows that economic insecurity shapes political behavior—how people vote and what policies they support. Given the importance of ongoing policy debates about reducing insecurity (e.g., a higher minimum wage, Medicare-for-All, the Affordable Care Act), it’s important to understand individuals’ preferences for those polices, and, also, what motivates those preferences.

In recent research, we investigated why individuals in developed democracies support greater spending on social insurance policies. Existing work pointed to three factors, which we argue have interrelated effects.

First is pocketbook or personal economic insecurity: when individuals face greater uncertainty in the labor market, it should be in their self-interest to support public policies aimed at guaranteeing greater economic security. When someone is more vulnerable to unemployment, they should see more at stake in unemployment insurance, for example, and may therefore be more supportive of public spending on it.

Second is sociotropic or collective economic insecurity: when the economy as a whole is experiencing greater insecurity (i.e., unemployment), individuals tend to support social policy more. This may be motivated by altruism and a concern for the wellbeing of others, or it may be that managing economic risk with public policy becomes more important as greater attention is devoted to economic security by the media, friends, etc.

Third is the institutional context: a range of public policies exist to reduce economic risk, and the existence of those policies affect individuals’ policy preferences in two ways. First, more generous and comprehensive social policies may buffer people from perceiving economic insecurity as a risk—people become less sensitive to or aware of their own exposure to economic risk, when they can rely on social insurance. Second, the existence of those policies can become institutionalized and normalized, and people may value the security they provide regardless of their own risk level.

With survey data from 16 developed democracies (including the US) in 1996 and 2006, we examined how these three factors explained individuals’ support for greater spending on unemployment insurance. (Please see our complete article and online appendix for the methodological details.) Our findings suggested some important conclusions. 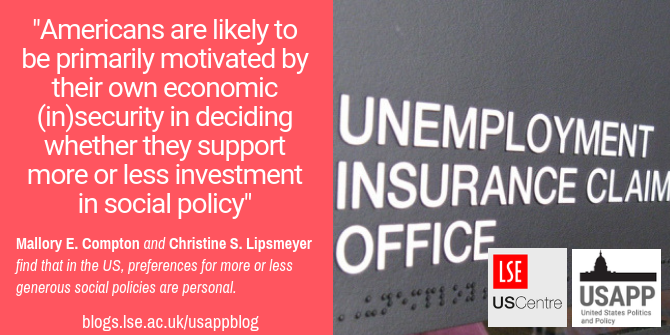 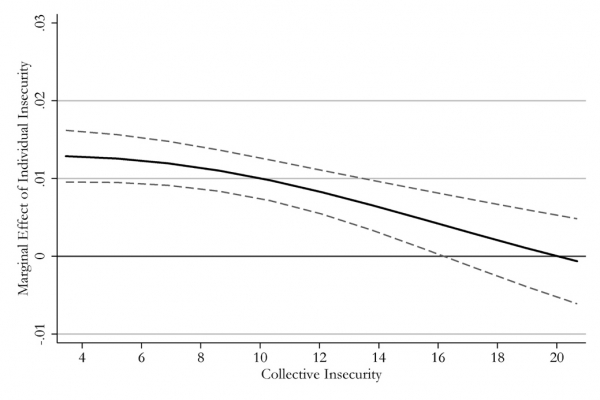 Our second important finding was that the effects of both personal and collective insecurity on policy preferences depended on context, and specifically, policy context. On the one hand, where social programs are less generous and less comprehensive—i.e., where governments provide relatively less security through public policy—individuals’ support for spending on unemployment insurance is largely driven by their own personal risk exposure. This result is shown in Figure 2. 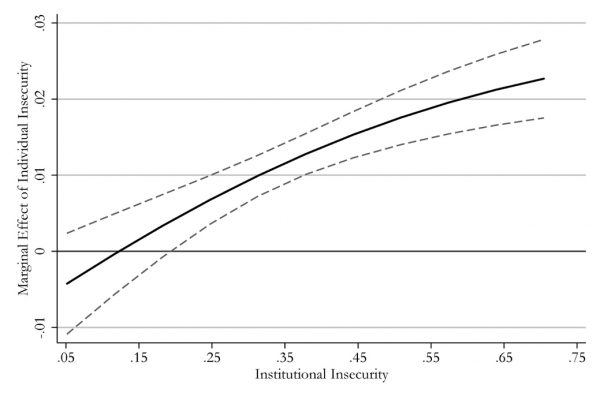 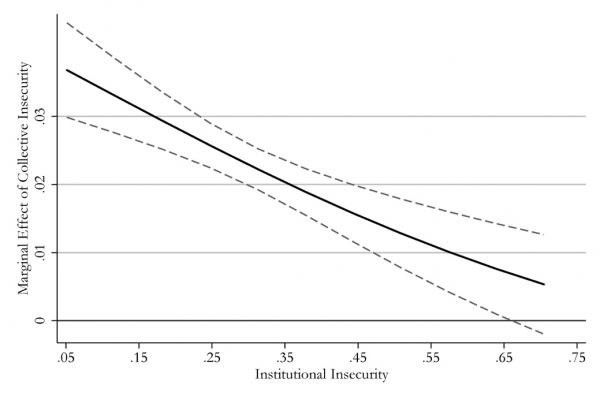 These results shed new light on why and when people are motivated to support greater spending on social policy. Yes, personal self-interest seems to matter quite a lot, but that’s not the end of it. People are also motivated by collective economic concerns, and sometimes macroeconomic insecurity matters more than personal economic insecurity. We used a cross-national research design, but our findings can still help us understand the politics of social policy in the US, specifically.

In this context of both low unemployment and less-generous policy institutions, Americans are likely to be primarily motivated by their own economic (in)security in deciding whether they support more or less investment in social policy. In the current US context, personal economic motivations trump collective economic concerns.

Christine S. Lipsmeyer – Texas A&M University
Christine S. Lipsmeyer is an Associate Professor of Political Science and the Director of the Program in Policy and Politics at Texas A&M University. Her current research interests include questions about redistribution, the dynamics of government policymaking, and the politics and economics surrounding budgets and public spending. Recently, her work has been published in The Journal of Politics, Social Science Quarterly, and the Journal of European Public Policy.