Donald Trump’s rhetoric isn’t the end of the presidency as we know it, but a symptom of what it has become

Donald Trump’s rhetoric isn’t the end of the presidency as we know it, but a symptom of what it has become

President Trump’s use of Twitter to engage directly with the public may seem like a new era for the presidency. But, argues Christopher Putney, Trump’s tendency to reach out directly to voters is actually the latest iteration of a form of presidential rhetoric that is a century old. Looking back to Woodrow Wilson, he reminds us, that in the 18th and 19th centuries, presidents appealed to Congress – not to the people. Now, the way Trump communicates is only a symptom of the how the ‘Rhetorical Presidency’ has evolved.

Although Donald Trump’s Twitter usage has become increasingly normalized since his election, likely because of its sheer frequency, an unnoticed irony remains. It’s actually the non-stop focus on how the president’s rhetoric outrages critics and galvanizes his hangers-on that has obscured its deeper significance. That significance is counterintuitive, and it’s been missed by virtually every pundit to date: Trump’s demagogic rise and efforts at government-by-tweet are less an aberration in modern presidential practice, and more an outgrowth, a symptom––and a dangerous high-point––of its underlying logic. To understand why this is the case, we need to go back to 1980s New Jersey, where a scholar named Jeffrey Tulis once wrote and taught.

Tulis, then an Assistant Politics Professor at Princeton, completed a short book in 1987. And without ever mentioning Donald Trump’s name, The Rhetorical Presidency would become the singularly indispensable guide for understanding his presidency––and American politics––more than three decades later. Experts and laypeople alike have variously objected to or embraced features of the modern presidency, but few have sought to understand the presidency’s place in our politics, pathologies included, the way Tulis did.

The book is an excavation of political history that unearths a striking discovery: what Tulis terms “the rhetorical presidency” is actually the presidency as we know it today. That is, the title refers to disarmingly recognizable features of the modern presidency itself; the president as policy leader, partisan-in-chief, the “the bully pulpit.” A leader, in other words, tasked with piloting policy campaigns and tending to the meaning-making of public problems through popular rhetoric. Tulis’s discovery was that these standards weren’t always standard. The rhetorical presidency was really an “invention”––an “innovation”––of an earlier Princetonian: the not uncontroversial early twentieth-century Progressive, Woodrow Wilson.

Before Wilson, presidents spoke infrequently, mostly communicated through formal writing directed at Congress, and almost never went to “the people” at large to campaign for policies. Until the twentieth century, presidential rhetoric was publicly available––but not popular––in character because it was intended for a congressional audience; it sought to elevate and instruct national discourse, not to influence or respond to public opinion. Why was this the case? Because bedrock rhetorical and political norms actually discouraged “popular” leadership in national politics by constitutional design. Such customs were political orthodoxy because popular leaders, in the minds of the Constitution’s architects, were synonymous with demagogues––that kind of ambitious political fear-monger Hamilton and his contemporaries thought would be lethal to American democracy. Their nightmare scenario is simple: popular passions might be exploited by a demagogue-turned-POTUS, and with every Article II prerogative at his disposal, tyranny might reign almighty. More than a century later, major changes in the content, forms, and frequency of presidential rhetoric introduced by Theodore Roosevelt were self-consciously developed, and regularized, by Wilson against that anti-demagogic orthodoxy.

Wilson’s project was an effort to replace eighteenth-century norms with direct appeals to the public instead of Congress––to require, in other words, what the founders’ had discouraged in politics. Frustrated by what he saw as a sluggish legislative process, corrupt party machines, and a lack of real leadership at the national level, Wilson ultimately offered the rhetorical presidency as a crucial innovation––a comprehensive theory of how American politics should work with popular presidential leadership at its center. The difficulty Americans will find in contemplating the pre-Wilsonian presidency (“the Old Way”) is evidence of how successful his efforts to redefine how we think about presidents (“the New Way”) have actually been. 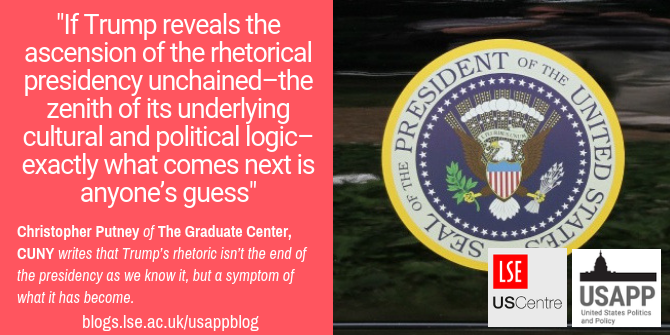 But was the rhetorical presidency inevitable, presumably because of emergent mass communication tools like radio, television, or social media? Tulis’s take is that it was Wilson’s new leadership doctrine––his transformation of “public and elite opinion” around rhetorical norms, not technological capacity––that made presidential use of new media legitimate. He’s quick to add, however, that something like the rhetorical presidency may have been unavoidable for “democratic” reasons. In a recent Brookings LawFare podcast, Tulis told Benjamin Wittes that Wilson’s innovation did respond to a real constitutional deficiency: the fact that the founders’ Constitution promised more “energy” to presidents than it could, in practice, deliver. He also reiterated that the presidency during the last century or so should actually be understood as inhabiting a “layered constitutional order”––a political universe largely colored or driven, in both its day-to-day governance dilemmas and major crises, by the Wilsonian vision––but still affected and subverted by the unnoticed founders’ Constitution operating “underneath” American politics all the while. Presidents after Wilson, in other words, are “pulled and hauled” between the founders’ more constrained, less rhetorical, understanding of the office, and the modern rhetorical one––often “toggling” between these two modes of governance depending on political context.

Trump’s Twitter usage demonstrates that he has neither knowledge nor interest in “toggling” between his self-understanding as the unmediated messianic leader of his supporters––a faction in the electorate he calls “the people”––and the more traditional, pre-Wilsonian presidency. But if Trump reveals the ascension of the rhetorical presidency unchained––the zenith of its underlying cultural and political logic––exactly what comes next is anyone’s guess. We know there’s no “going back” to the Old Way––we wouldn’t want to. But when I asked Jeff Tulis if he thought that Trump’s rise constituted a dangerous symptom of the underlying culture of the rhetorical presidency, or a bona fide demagogic threat to the office as we know it, his answer surprised me. “Both,” he told me. Tulis thinks the “shift from presidents who toggle between the old and new constitutional orders” but still remain “constrained” periodically, to Trump––“for whom,” he emphasized, “there is no toggle switch”––means that its current occupant constitutes a real “threat to the office”; the framers’ nightmare in the flesh.

Understanding the Trump presidency accurately, then, requires less hyperbole and more diagnosis. It requires that we see his rise as the outgrowth of––not an exception to––modern presidential politics. But evaluating Trump in this way doesn’t automatically mean he’s the autocrat bent on the destruction of the Constitution Hamilton and the framers feared––although he is certainly emblematic of the demagoguery they feared. It means instead that the specter of real constitutional decay in the US is the political precedent Trump has lodged in the public consciousness. His election is a testament to what variety of politician becomes possible when an ambivalent modern presidency––one struggling to serve contemporary, often conflicting, public demands engendered by its Wilsonian remolding––collides with pervasive cynicism and disenchantment about politics in the electorate.

It is wholly plausible that Trump’s model can be replicated in years to come––but by a more calculating, more effective, and potentially more destructive, presidential demagogue. One capable, in other words, of building a real electoral majority and either manufacturing, or simply exploiting, some convenient crisis––another recession, a terrorist attack, or worse––to their own ends. For this reason, rejecting Trump’s erosion of the still-vital leadership norms Wilson (mostly) muted remains crucial.

Practically speaking, guarding against this possibility in the future must begin with a willingness by citizens of both parties to see what is novel––and what is not––in Trump’s example. And, perhaps more urgently, to see the danger inherent in both.