Over the last decade, increasing partisan rancor in Washington DC has left many wondering if we will ever see a return to bipartisanship. In new research, Nick Davis finds that this lack of desire for compromise extends to voters, too. Analyzing nine years of survey data, he finds differences among Republican and Democratic supporters who have sorted themselves into groups with similar ideologies regarding the perceived value of compromise. However, all well-sorted partisans are much less likely to compromise on policy outcomes compared to those who were not similarly sorted.

In theory, compromise is a lovely idea. It involves different groups coming together to advance the status quo in a way that benefits – and inconveniences – both bargaining parties in equal measure. In practice, however, compromise is often more troublesome. People dislike making concessions, particularly when it leads to an outcome that is less attractive than their original or ideal preference.

Democracy, of course, is grounded in this sort of exchange, where elected officials are tasked with translating the competing demands of citizens into policy outputs. Presumably, this arrangement involves some sort of bipartisan negotiation where legislators make mutual concessions to achieve policy that advances the status quo. Yet, not only do the Republican and Democratic Parties repeatedly fail to converge on solutions to basic matters like funding the government, but lone actors occasionally gum up their own party’s policymaking.

Curiously, while compromise gets panned widely in today’s polarized political environment, almost a decade of survey data implies that the average Democrat is more likely than a Republican to convey that they value “compromise.” To the extent that there are baseline partisan differences in preferences for compromise, I was curious whether or not sorting – the overlap between people’s partisan and ideological identities as likeminded people group together – can reduce these differences. This question seems particularly pressing given the tremendous sorting of political preferences in American politics, and the negative social outcomes that follow.

Why might sorting contribute to a disinterest in compromise? Consider first that past research finds that greater shared overlap between political identities increases their dislike for members of the other party and decreases the likelihood of split-ticket voting (irrespective of whether people belong to the “left” or “right”). Given that merely conceptualizing oneself as a member of a group can generate sufficient prejudice to reshape economic exchange, the alignment of multiple political identities should mean that political compromise becomes uniquely distasteful because sorting amplifies group distinctions. If the highly-sorted are more likely to exhibit in-group loyalty and profess bias against those on the other side, then sorting ought to decrease an individual’s willingness to cede concessions to the other party. 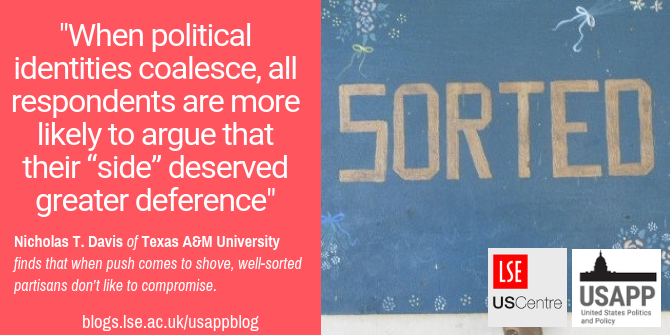 To explore whether high levels of sorting decrease a preference for compromise, in recent research, I analyzed data from four survey datasets from 2007 to 2016. I measured sorting by taking the traditional seven-degrees of partisanship and recoding them to so that −3 = extremely conservative to 3 = extremely liberal. Subtracting ideological self-placement from partisanship means that sorted identities will receive larger (smaller) values. Thus, this yields scores that range along a continuum from −6 = strong Democrat/extremely liberal to 6 = strong Republican/extremely conservative, where the value 0 = extreme cross-cutting identities (and, also, pure moderate / Independent). This new index is then rescaled to range from 0 to 1, where low values convey cross-cutting identities and higher scores convey overlap among strong identities. Scores for Democrats and Republicans across all four datasets are shown in Figure 1. 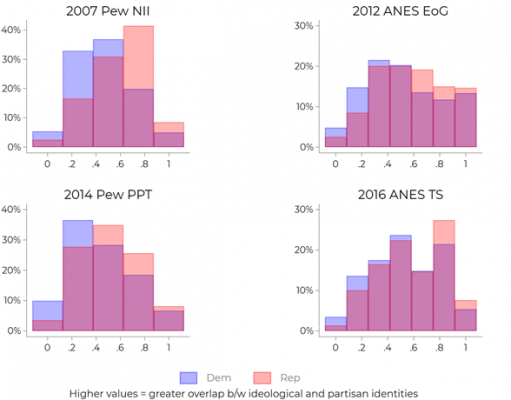 To test whether sorting is associated with preferences for compromise, I then ran a series of regressions on whether or not individuals preferred legislators who “stuck to their principles” (coded 0) or “compromised to get things done” (coded 1). Figure 2 plots predicted probabilities of selecting the pro-compromise position at various levels of sorting for Democrats and Republicans. Across each survey, Republicans with strong, overlapping partisan and ideological identities are unlikely to prefer compromise. In contrast, however, sorting does not appear to reduce Democrats’ preference for compromise. 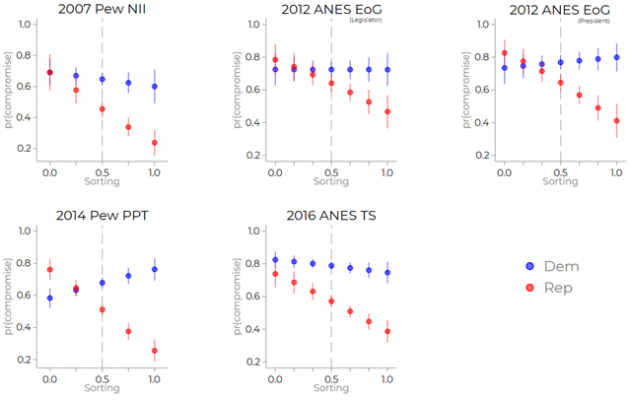 While this pattern of preferences is consistent across the four datasets, the underlying question is, admittedly, a bit double-barreled. Specifically, a respondent could desire that their elected representatives stick to their beliefs and hope that that person would compromise under certain circumstances. Figure 3 presents some evidence that patterns depicted in Figure 2 extend to other preferences toward compromise. In the 2007 Pew NII, a question was posed to respondents about “How much they liked compromise.” Using regression techniques, I modelled responses to that instrument as a function of sorting and a series of controls. There is some evidence in Figure 3A that well-sorted Republicans (i.e. respondents with strong, overlapping ideological and partisan identities) dislike sorting more than well-sorted Democrats.

Returning to the question of whether principles are the sticking point, the 2016 ANES literally asked respondents whether they felt compromise violated their principles. Again, prominent differences are revealed across Democratic and Republican respondents. Well-sorted Democrats are much more likely to reject the idea that compromise is equivalent to selling out your principles relative to their well-sorted Republican peers. 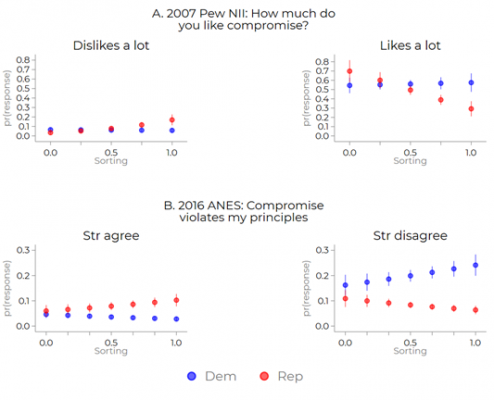 The evidence thus far seems to imply that Democrats are more generous than Republicans when it comes to notions of compromise. However, if the above items deal with compromise in theory, then what happens when we actually ask respondents to distribute goods when bargaining? Figure 4 illustrates that when asked whether President Obama or Republicans should receive more deference in policy-making, differences among the well-sorted disappear. As the overlapping confidence intervals indicate, when political identities coalesce, all respondents are more likely to argue that their “side” deserved greater deference.

Figure 4 – Who should get their demands? 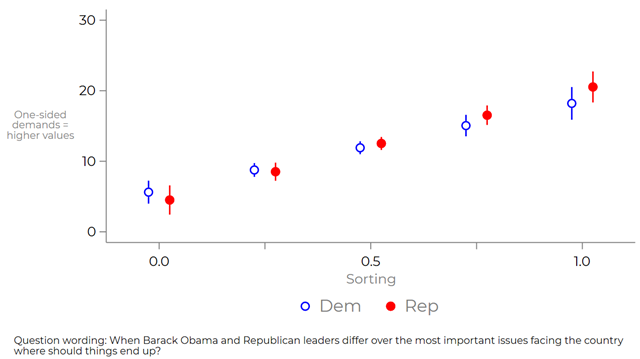 To the extent that sorting is associated with a preference for one-sided demands in policymaking among both Democrats and Republicans, polling in 2018 revealed some slippage in abstract preferences for compromise among Democrats. I’ve shown elsewhere that individuals’ orientations toward traditional group hierarchies were remarkably sorted in 2018. So, too, have Democrats’ policy preferences aligned across multiple dimensions. It may be the case that Democrats, after a tumultuous eight years of Republican stonewalling on everything from healthcare policy to the lack of Senate vote on President Obama’s Supreme Court nominee, Merrick Garland are finally coming around to the idea that compromise is not only less viable in today’s polarized setting, but, perhaps, is a less attractive proposition in and of itself. Given the popularity of progressive policies, combined with a new crop of young activists pushing the party to the left, Democrats’ incentive to value compromise may be shifting in real time. Whether this is good or not is a matter of perspective, but the 2020 presidential election cycle will be an intriguing test bed for whether these relationships hold.