Immigration has been an important part of the US political debate in recent years, especially since Donald Trump used the issue to reinforce support with Republican voters as part of his 2016 election campaign and during his presidency. In new research, Maneesh Arora examines the effects of the segregation of immigrant groups and wider attitudes. He finds that highly segregated counties with high levels of population growth are linked to greater support for more restrictive immigration policies.

Immigration policy has taken center stage in US politics in recent years with heated debates about immigration reform, the Deferred Action on Childhood Arrivals program (DACA), and the DREAM Act. Among the American public, fears about immigration are shaping political identities, policy preferences, and choices in the voting booth. Indeed, President Trump’s success as a presidential candidate largely hinged on his ability to effectively activate anti-immigrant sentiment from voters. Given the rapidly changing demographic composition of the United States and the increasing need for comprehensive immigration reform, it is imperative that we understand the factors that shape people’s views on immigration policy.

Racial context, namely levels of demographic change and segregation in one’s geographic area, have been found to influence people’s policy views on immigration. Many studies, and popular societal narratives, indicate that rising immigrant populations lead to hostility from whites and opposition to forms of permissive immigration policies. A recent study found that population growth of immigrant groups in one’s geographic vicinity is strongly associated with support for anti-immigration presidential candidates. Yet this does not portray the full story.

The effects of demographic change depend on segregation

Importantly, the effects of demographic change on immigration policy preferences depends on the levels of contact with the immigrant group. Contact theory suggests that meaningful interactions between racial and ethnic group members should reduce prejudice and improve interracial relations because it can dispel harmful stereotypes and lead to the “perception of common interests and common humanity between members of the two groups.” As one might expect, meaningful contact between racial and ethnic groups is much more likely to take place in areas that are residentially integrated. Therefore, population growth of immigrant groups can lead to improved intergroup relations, but only if the area they are moving in to provides opportunities for racial and ethnic group members to interact with one another. 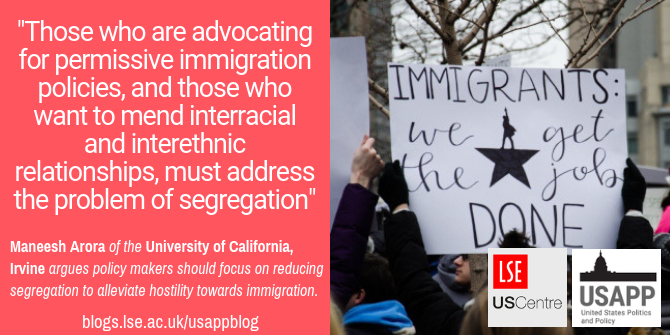 “immigrants: we get the job done” by Tim Pierce is licensed under CC BY 2.0

Segregation can dull these effects by making immigrant groups less visible, making opportunities for contact limited or nonexistent. Moreover, segregation can emphasize differences between groups, solidifying harmful stereotypes. It is likely then that population growth of immigrant groups in segregated counties has the opposite effect of increasing prejudice and opposition to permissive immigration policies.

The results of my new research strongly support this theory. My analysis, conducted using data from the Cooperative Congressional Election Study and the US Census, finds that the effects of population growth on immigration policy preferences change dramatically depending on the level of segregation in the area where someone lives. 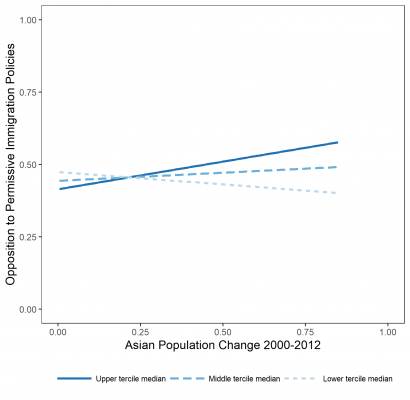 It is striking that the effects of population growth of both groups are identical. Past studies have found that whites tend to be more threatened by Latino population growth than Asian American population growth. Yet the results suggest that this may simply be a function of Latinos being more residentially segregated, and that Asian Americans are more likely to marry, live close to, work with and attend school with whites. 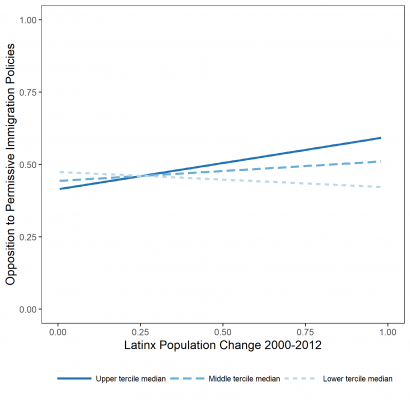 Addressing segregation will help to alleviate hostility to immigration

These results suggest two important conclusions. First, to understand why people oppose immigration, it is essential to understand the racial context of the area they are living in. Individuals who live in highly segregated areas are likely to perceive population growth of minority groups as threatening. Meanwhile, those living in more integrated areas are more likely to have meaningful and positive interactions with minorities, which alleviates hostility and improves relations.

The popular narrative of rapidly changing demographics leading to increased hostility and fear of immigrants needs to be modified. Population growth can lead to increased hostility and preference for restrictive immigration policies among individuals living in the area if the area is highly segregated. However, if the area is more residentially integrated, population growth has the opposite effect.

The second conclusion is that those who are advocating for permissive immigration policies, and those who want to mend interracial and interethnic relationships, must address the problem of segregation. Segregation rates for these groups remains remarkably high. Indeed, Asian Americans and Latinos are as segregated as they were in 1980. Moreover, the rapid growth of these two pan-ethnic groups is creating large, concentrated ethnic enclaves throughout the country. Concentrated efforts from policy-makers to integrate our homes, schools, and places of work can help alleviate hostility towards immigrants and build public support for immigration.

Maneesh Arora – University of California, Irvine
Maneesh Arora is a PhD candidate in political science at the University of California, Irvine. His research agenda is at the intersection of racial and ethnic politics, public opinion, and political psychology. His articles have been published in Political Research Quarterly, Politics Groups and Identities, Journal of Education and Social Policy, and the Washington Post’s Monkey Cage.