With the 2020 presidential primary election season fast approaching, Caitlin E. Jewitt looks at how the reforms of the last 50 years have changed the way parties and voters choose who becomes a presidential nominee. Examining four decades’ worth of primary election data, she finds that rather than quickly deciding the nomination, moving states’ presidential primaries forward helps more voters to participate meaningfully. Her research also shows that party electoral rules in areas such as how delegates are allocated are still of great importance and can advantage certain candidates and agendas.

In July 2016, Donald Trump, a candidate who had never held elected office and once identified as a Democrat, secured the Republican presidential nomination at the party’s convention in Cleveland, Ohio. He did so without the support of the GOP elite. In fact, he faced vocal opposition from portions of the Republican Party, as a #NeverTrump movement mounted on the Convention hall floor. On the Democratic side, Hillary Clinton, perceived as the inevitable nominee by most Democratic Party elites, faced unexpectedly stiff competition from Vermont’s Independent Senator, Bernie Sanders. A grassroots movement and enthusiastic support for Sanders from a significant portion of the electorate stalled Clinton from capturing a majority of delegates until June 7, 2016. The months-long nomination fight raised doubts, often propelled by the Sanders camp, about the fairness of the process and the rules used to select presidential nominees.

These two nominations, unfolding simultaneously yet distinctly, underscore key questions about who wields the ultimate power to select presidential nominees ­— voters or party elites? I explore this tangled issue in my new book, The Primary Rules: Parties, Voters, and Presidential Nominations. In it, I argue that through their ability to set the electoral rules, the parties in effect retain substantial control over the nomination process.

Following the tumultuous 1968 Democratic National Convention in Chicago, the Democratic Party embarked on a path to reform the presidential nomination process, taking the selection power out of the hands of party elites in smoke-filled back rooms and placing it in the hands of voters. The current post-reform system is characterized by a mix of caucuses and primaries held over the course of several months, where voters voice a preference for their favored candidate. Which citizens are allowed to participate, however, is dictated by state rules governing how open the nomination contests are to independents and opposite party members. Complicated delegate allocation rules then guide how voter preferences are translated into delegates, who gather at the National Conventions held during the summer to officially nominate a candidate.

There is no doubt that in altering the system the parties relinquished significant control over both the process and the outcome.  The nomination system is more democratic than it has ever been; yet, voters are not granted absolute authority in the selection of presidential candidates. I argue that the rules, put in place by the national parties, state parties, and the states, influence the extent to which voters have full, timely, and meaningful participation in the process as well as the extent to which voters “choose” the nominee.

Yet the parties’ ability to determine the outcome also remains limited.  As a result of the variation in rules across states, parties, and years, the US presidential nomination system is convoluted and not well understood—ironically—even by those creating the rules. With each and every rule change, whether at the national or state level, there are intended and unintended consequences. In The Primary Rules, I utilize an original data set to examine presidential nominations between 1976 and 2016. I uncover the effects of the rules on the competitiveness of the nomination, the number of voters who participate, and the nomination outcomes. 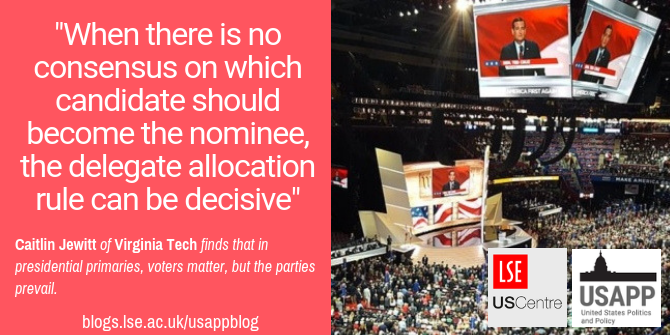 Recently, the national parties have proven wary of clustering their nomination contests early on in the calendar (or ‘front-loading’) in an effort to command influence and attention. In The Primary Rules, I develop and present a new measure, the front-loading discount measure. This measure utilizes information about the entirety of each nomination calendar, which allows me to conduct a systematic assessment of the level of front-loading present in each nomination. I determine that in years where the national parties have attempted to curb the trend, such as the Republicans in 2012, we instead have seen significant increases in the level of front-loading. Contrary to conventional wisdom, I find that a highly front-loaded nomination does not result in a quickly decided nomination. In fact, highly front-loaded nominations allow more states the chance to hold contests when the nomination is still competitive, furnishing more voters with the opportunity for meaningful participation.

However, the rules put in place by the states and parties can also affect the number of voters that avail themselves of the opportunity to participate. I show that controlling for other relevant factors, an open contest and primaries result in higher levels of turnout. The findings also suggest that competitive contests held later in the nomination season have higher levels of turnout than contests held earlier. Once the nomination is no longer competitive, the timing of the contest has no effect on the voter turnout rate. Though there are other reasons to front-load, if a state wants to maximize voter participation, it should not rush to the front of the calendar.

Even when citizens do show up to participate, however, the meaningfulness of their votes may depend on whether there is a front-runner in the race and the delegate allocation rules that are employed. Holding candidate and voter behavior constant, I find that in nominations when there is no clear front-runner, changing the delegate allocation rule would result in a different candidate leading the delegate count. For instance, in 2008, Mitt Romney withdrew from the Republican nomination race on February 7, as he was 424 delegates behind John McCain. If Republican delegates had been allocated proportionally with a 15 percent threshold, Romney would have been leading McCain by 22 delegates on February 7. This calls into question the impact voters have on the selection of a nominee: when there is no consensus on which candidate should become the nominee, the delegate allocation rule can be decisive.

The goal of the nomination reforms was to provide timely and meaningful participation for voters. That objective has been only partially fulfilled: I conclude that voters matter, but the parties prevail. Even though numerous party elites disagreed with the preferences of those who participated in the primaries and caucuses, the 2016 Republican nomination of Donald Trump demonstrates that citizens can have a meaningful say in the nomination. Yet the electoral rules can be crafted and employed for strategic purposes. The parties can, and do, create rules to advantage preferred candidates and achieve their goals. It is therefore critical to recognize that the goals of the parties have changed over time, at present often prioritizing the nomination of a candidate who can win in November. As the parties look to 2020, the rules will remain crucial. Republicans are maneuvering to protect incumbent President Trump from a primary challenge and present a unified party. Rule changes employed by the Democratic Party, including reforms to the super delegate system, are designed to heal the divisions of 2016. These rule changes will surely influence the 2020 process, especially with a crowded field of candidates with no clear front-runner. They may, however, prove consequential for citizens — affecting the extent to which they have a meaningful say in the selection of a nominee.

May 8th, 2019|Caitlin E. Jewitt, Elections and party politics across the US|0 Comments
Previous post Next post