In the US and around the world, women are still dramatically underrepresented within corridors of power. In new research, Scott Pruysers and Julie Blais examine how this gender gap might be closed by encouraging more women to run for office, and if it matters who does the asking. They find that in general, no matter who does the encouraging, women have less political ambition compared to men, but also that women respond much worse to male party recruiters. They argue that if we are to see more women in politics, women need to be better represented in non-elected positions of party authority, and they in turn need to encourage more women to stand for office.

The 2015 Canadian general election saw only 88 women elected to the House of Commons. This represents a mere 26 percent of the 338 Members of Parliament. The continued underrepresentation of women in national legislatures in Canada and around the world raises important questions about who is willing to step forward to run for elected office and who is responsible for the recruitment of potential candidates.

To develop a better understanding of political ambition among ordinary citizens in Canada, we conducted two studies: a survey of approximately 400 eligible voters, and an experiment of more than 400 undergraduate students. Here we are interested in answering two important questions: can encouragement help close the gender gap in political ambition and does it matter who does the asking? We find that despite hypothetical encouragement from several different sources such as party officials and family members, the gender gap in political ambition persists. We also find preliminary, but compelling, evidence that women are less receptive to that recruitment when it comes from a man.

Who wants to run for political office?

We begin with our survey results and the extent to which ordinary citizens are interested in seeking political office. We find a significant gender gap across four different items related to political ambition (see Figure 1). When asked to rank order a list of potential careers, some of which are political in nature (i.e., Member of Parliament) while others are not (i.e., Teacher), men are more likely than women to place a political career in their top five choices (47 percent vs. 34 percent). When asked about thinking about running for office, thirty-seven percent of men report that they have thought about running compared to just 18 percent of women. Men are also more likely to believe that they are qualified for a political career and that they would win should they ever contest an election. These gender differences in ambition are consistent with recent findings from other countries such as the US and UK. 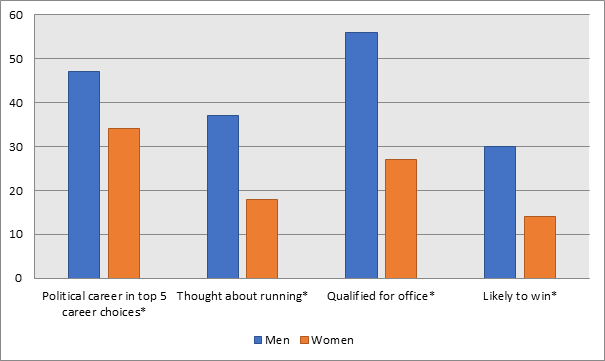 Political recruitment: Does it matter who does the asking? 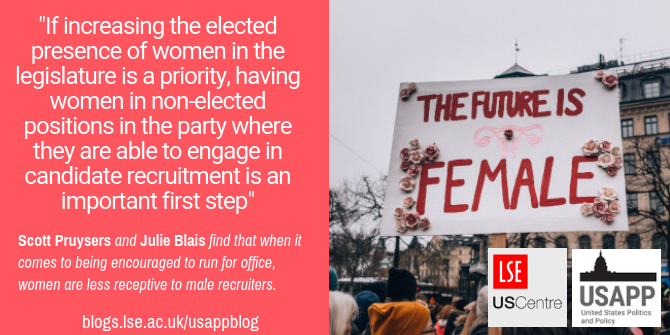 Photo by Lindsey LaMont on Unsplash

Although the source of encouragement did not seem to matter, we wondered whether encouragement from a man or a woman might make recruitment more or less effective. Evidence suggests that women are more likely to be successfully nominated as candidates when the local constituency association president is a woman. We suspect that a gender affinity effect might be at play whereby women respond more positively to recruitment from other women.

Despite our expectation, we find no evidence of the kind of gender affinity effect that we predicted. As Figure 2 reveals, women in the control and female party recruiter conditions do not significantly differ in terms of their openness to considering a political career. While we expected women to be more open to a political career in the female recruiter condition, as this might signal that the party is open and inclusive and therefore welcoming of women in its ranks, there is no statistically significant difference between the two conditions. We do, however, find that women respond significantly worse to a male party recruiter. Whereas one-in-three women in our control condition were open to a political career, less than 20 percent responded positively when the recruiter was explicitly identified as a man. We suspect that male recruiters prime the view of politics as a masculine domain where women are outsiders, and perhaps even unwelcome (despite the encouragement). 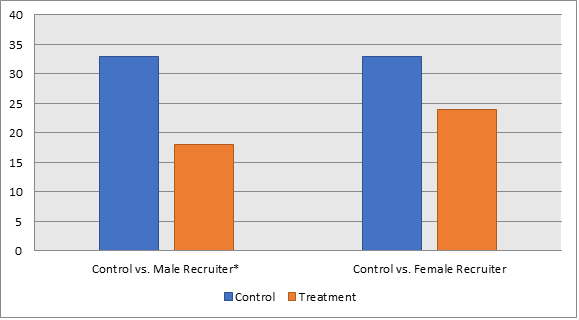 As for the men in our experimental study, there were no significant differences across the various conditions. Regardless of the sex of the recruiter approximately half of the male participants reported that they would consider running for office if they were encouraged by a party official to do so. This is not entirely surprising given the findings reported in Figure 1. As men already have higher levels of baseline political ambition, and given that they are considerably more confident in their ability to win office, the precise nature of encouragement does not seem to influence their general willingness to consider a political career.

If we’re concerned with underrepresentation and want to have more women in politics these results have a number of implications for political parties seeking to field a more diverse set of candidates. First, it demonstrates the importance of having women occupying positions of authority inside of political parties. If increasing the elected presence of women in the legislature is a priority, having women in non-elected positions in the party where they are able to engage in candidate recruitment is an important first step. Second, it offers political parties with a practical strategy of recruiting women to stand for election: when possible have more women, not necessarily men, do the asking.

As with any research there are several limitations worth considering. The first is that we are only dealing with hypothetical encouragement. Respondents (in both studies) did not actually receive any tangible encouragement to seek political office but instead were provided a scenario in which they received encouragement. Conducting a field experiment with encouragement from real party officials is a logical next step. Second, our experimental results utilize a rather narrow pool of participants (undergraduate students) which has implications for generalizability. These findings should therefore be replicated with different samples – community, eligibility pool, etc. Finally, future research would benefit from adopting an intersectional approach, considering the potentially different effects for women of colour, as well as a longitudinal design that is capable of exploring the duration and strength of the treatment and acknowledges that recruitment can be an ongoing process.

Scott Pruysers – Ryerson University
Scott Pruysers is a Postdoctoral Fellow at Ryerson University and an Adjunct Research Professor at Carleton University. His research interests include party organization, intra-party democracy, and political psychology. His research has appeared in journals such as Political Research Quarterly, Party Politics, Canadian Journal of Political Science, and Politics & Gender. He is the co-author of The Promise and Challenge of Party Primary Elections: A Comparative Perspective (McGill-Queens University Press, 2016) and the co-editor of The Personalization of Democratic Politics and the Challenge for Political Parties (ECPR Press, 2018).

Julie Blais – Carleton University
Julie Blais is an Assistant Professor in the Department of Psychology at Carleton University. Her research interests include personality, risk assessment, and the prediction of both prosocial and antisocial behavior. Her research has appeared in journals such as Political Research Quarterly, Psychological Assessment, Personality and Individual Differences, and Politics & Gender.